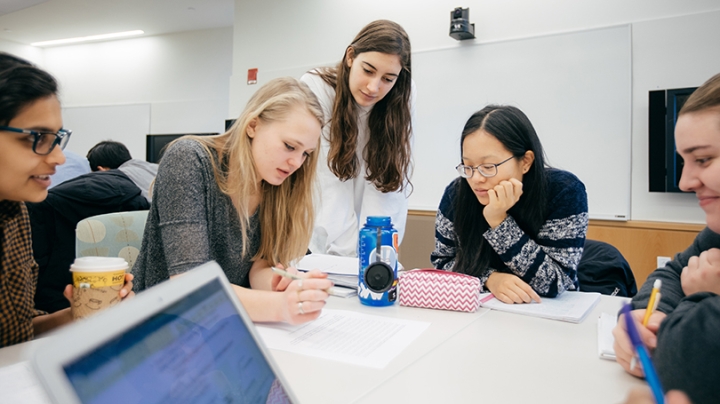 The first thing a visitor to Professor Thomas Jack’s “Biology 13: Gene Expression and Inheritance” classroom in the Class of 1978 Life Sciences Center notices is the noise.

In groups of four or five, several dozen students debate how to calculate the probability of deriving a specific phenotype from genotypes posted on a screen at the front of the room.

As they work, four learning fellows—undergraduates hired to serve as “near-peer” mentors and facilitators in the classroom—circulate among the tables, listening and answering questions when students seem stuck.

At one table, Joe Minichiello ’17 helps students rethink an answer that has gone wrong. Like the other learning fellows, Minichiello has taken “Bio 13” before.

“Eighty percent of the time you’re going to have the parental type, but is it always the one you want?” he asks.

“Oh—no!” a student exclaims, suddenly understanding. Minichiello listens as the student explains her insight to the rest of the group.

The Learning Fellows Program—organized by the Dartmouth Center for the Advancement of Learning (DCAL) and Educational Technologies—embeds advanced students like Minichiello in classes around campus. It’s a model that is rapidly changing the Dartmouth classroom experience, says the program’s director, Kes Schroer.

The program started in 2015 with seven fellows in “Biology 13” and “Comparative Literature 1.” “Students loved them, the faculty loved them, the learning fellows had a great experience—it was a huge win,” Schroer says.

This spring, 50 learning fellows will work with more than a dozen faculty members in courses across campus. The program is also collaborating with the Center for Service to train social impact learning fellows specifically to help faculty and students make connections in the local community. “I think of the learning fellows as this nexus where a lot of important questions about teaching and learning at Dartmouth are happening,” Schroer says.

“The opportunity to work with peers in an academic environment is rewarding, on so many levels,” says “Biology 13” learning fellow Joe Minichiello ’17, center. “Just seeing someone have that ‘aha’ moment. And sometimes you see someone who was quiet at the beginning of the term become more confident about science.” (Photo by Robert Gill)

“Bio 13”—a foundational course for biology majors and students interested in attending medical school—is a good example of that nexus. Until two years ago, it was taught as a traditional lecture course. But in 2015, Jack and his colleagues, with the support of DCAL’s Gateway Initiative, flipped that model on its head. Now, instead of coming to class for lectures and completing problem sets as homework, students watch video lectures on their own time and work on problems in class in groups.

But the first time he taught with the flipped model, Jack found that providing equal support to 60 students in groups of five was a challenge. Some group members supported each other’s learning; other groups never gelled. “I would circulate around and try to help the groups with the problems, but there was only one of me and 15 groups,” he says.

When instructional designer Adrienne Gauthier and DCAL associate director Cindy Tobery suggested bringing in undergraduate assistants to help, Jack wasn’t sure. “I was skeptical, but I said, all right, we’ll give it a shot,” he says. “And it was very effective—more effective than I expected. This whole near-peer learning model is a good one.”

What makes the model effective? For one thing, in large classes, student mentors can be more approachable than professors. “Students in the groups don’t feel intimidated when a learning fellow sits down with them,” Jack says. “They are willing to admit that they don’t know something, and ask stupid questions, whereas with me they don’t want to sound stupid, so they don’t say much of anything.”

“Bio 13” student Emily McKee ’20 agrees. “I appreciate the learning fellows, especially because they were in our shoes once. They have a very different perspective from the professor, so they can sometimes be more helpful.”

The fellows give faculty feedback on how students are engaging with the course material, and faculty can ask fellows to intervene when a student is struggling.

“You get to know the students better,” Jack says. “Back when we lectured, we didn’t really get to know very many of them if they didn’t come to office hours. Now there’s a lot of interaction. It’s a lot more fun.”

The fellows gain something, too. “The opportunity to work with peers or near-peers in an academic environment is rewarding, on so many levels,” says Minichiello. “Just seeing someone have that ‘aha’ moment. And sometimes you see someone who was quiet at the beginning of the term become more confident about science.”

“We train students with techniques in open questioning, conflict resolution, and coaching,” says Schroer. The skills they learn are transferrable to all kinds of leadership and collaborative contexts, she says. “Not all of them will be teachers, but this is really professional development for them.”

Learning fellow Abigail Ward ’18, who like Minchiello plans a career in medicine, says, “When you’re a doctor, or whatever you go into, you’re not working alone. You’re going to have that stormy problem-solving group that needs a good communication process, no matter what profession you do. It’s a crucial skill.”

The program has helped fellows develop stronger relationships with faculty. “I’ve learned to appreciate how much these professors care, and how much effort they put into classes,” says Ward, who also served as a learning fellow in “Chemistry 52: Organic Chemistry.” “That’s shifted my Dartmouth experience.”

Minichiello and Ward say the role has also been good review for the MCATs (Medical College Admissions Test), although that’s not their primary motivation. “I don’t think there’s any other job on campus where you’re working with your peers in such a dynamic and interesting way,” says Ward. “It’s rewarding.”

In its first 18 months, the program has trained more than 60 fellows, reaching about 1,500 students in the social sciences, the arts and humanities, and the sciences—a breadth of disciplines that makes Dartmouth’s Learning Fellows Program distinctive, Schroer says. And every course uses fellows differently. In one recent history course, a learning fellow with a background in computer science helped teach students the coding required to analyze U.S. Census data. In a beginning Latin class, a fellow worked with students to develop games to test their vocabulary.

Back in Jack’s “Bio 13” classroom in the Life Sciences Center, students are so engaged in working on their problem that it’s almost a surprise when Jack calls on a group to share its solution with the class.

“There’s a lot of noise in class a lot of the time—it’s not the same control as when you’re lecturing,” says Jack. “Sometimes it’s hard to get students’ attention once they’ve been working on something—they don’t want to stop. When that kind of thing happens, it’s pretty good.”