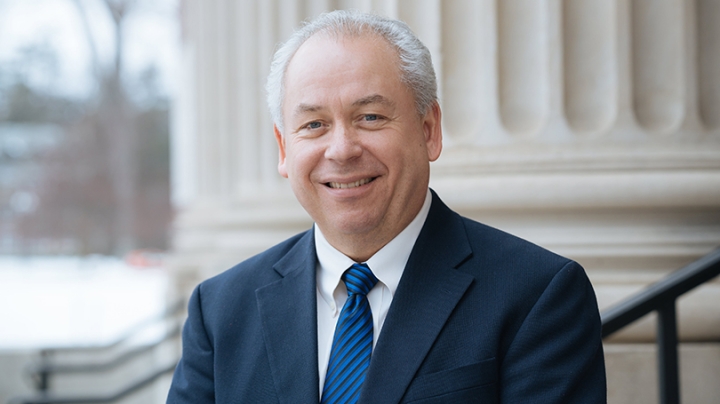 President Phil Hanlon ’77 and Provost Carolyn Dever announced today that they have appointed N. Bruce Duthu ’80, a scholar of Native American law and policy, to be the next dean of the faculty of arts and sciences.

Duthu, the Frank J. Guarini Associate Dean of the Faculty for International Studies and Interdisciplinary Programs and the Samson Occom Professor of Native American Studies, will succeed Dean Michael Mastanduno on July 1. Mastanduno, the Nelson A. Rockefeller Professor of Government, has spent seven years leading the arts and sciences faculty.

Duthu, an acclaimed scholar with a wealth of international experience, has written about tribal sovereignty and the rights of indigenous peoples while building a career in higher education administration.

“Bruce is an exemplary teacher and scholar who has dedicated himself to supporting our students and, as associate dean, has engaged meaningfully with faculty,” says President Hanlon. “I look forward to working with him as we strengthen academic excellence and a culture of interdisciplinary creativity at Dartmouth.”

Duthu will serve a four-year term and will oversee 41 departments and programs and about 450 faculty.

“Because of my long history with the College, and knowing how many talented people have occupied this chair, including Mike, I am humbled to be offered this position,” says Duthu. A staunch champion of the liberal arts, Duthu says, “for me, nothing can be more compelling than working with our faculty to prepare students to have the facility, the agility, and the openness to deal with a constantly changing world. That’s the essence of a liberal arts education.”

And as that world changes, so does Dartmouth, Duthu says.  “As it grows, our faculty is becoming more diverse, which is an institutional priority—to make sure Dartmouth’s faculty increasingly reflects our students’ and, more broadly, the nation’s demographics.”

“I will be a fierce advocate for the faculty and I look forward to creating opportunities across the curriculum for faculty to become more engaged with each other as teachers and as scholars,” he says.

“He is highly experienced and open to new ideas about how best to deliver an unparalleled education at a time of rapid social and technological change,” she says. “Bruce embraces the highest academic standards in his own work and in his institutional leadership, and will be a powerful advocate for the scholar-teacher model.”

A member of the United Houma Nation and an expert on federal Indian law and tribal sovereignty, Duthu is the author of numerous book chapters and articles, and of two books: American Indians and the Law (Viking/Penguin Press), and Shadow Nations: Tribal Sovereignty and the Limits of Legal Pluralism (Oxford University Press), which was the basis for an international symposium hosted in 2013 by the University of Trento, in Trento, Italy: “Indigenous Peoples’ Sovereignty and the Limits of Judicial and Legal Pluralism.” Duthu’s book was the topic of several panel discussions in which he participated.

“His meticulous scholarship, program-building skills, and deeply humane relationships with communities, students, and colleagues are hallmarks of a distinguished career that has been dedicated to nurturing the well-being of Native nations and Native peoples,” says Lomawaima, who teaches at Arizona State University.

Last September, President Barack Obama nominated Duthu to be a member of the National Council on the Humanities, although the nomination lapsed at the end of the Obama presidency.

In 1991, Duthu joined the faculty of Vermont Law School in South Royalton, Vt., and was founding director of the law school’s Partnership in Environmental Law and Energy Policy with Sun Yat-sen University Law School in Guangzhou, China. As a visiting professor, he has taught at universities in Italy and Australia, and at Harvard Law School.

In 2008, he returned to Dartmouth as a professor of Native American Studies, chairing that program from 2009 to 2015. Duthu helped develop an interdisciplinary program in Santa Fe, N.M., where Dartmouth students get to know members of Native American tribal communities.

As faculty dean, Duthu plans to continue teaching, as did Mastanduno. He will teach a government class, “Federal Indian Law,” in the coming school year.

Hanlon thanked Mastanduno, an expert in the field of international relations, for his exceptional leadership and commitment to Dartmouth. Mastanduno served a five-year term as dean and then, at Hanlon’s request, agreed in 2015 to serve another two years. After a yearlong sabbatical beginning on July 1, Mastanduno will return to teaching and research at the College.

“Mike has been a valued member of my leadership team and a strong champion of the faculty. He has done much to enhance the academic excellence of the arts and sciences faculty. As Mike returns to his first love, teaching and research, I look forward to working with Bruce to build on the progress we have made, actively promoting and supporting teaching excellence and innovative scholarship,” says Hanlon.

“I’d like to thank the committee members for the time and consideration they spent on this important search. I very much appreciate their guidance and service to the Dartmouth community,” says Hanlon.

Cottingham and Domosh, in an email, say they are delighted that Duthu will be the next dean of the faculty.

“Our committee considered a talented pool of candidates from across campus and around the country, and Bruce stood out for his scholarship, commitment to the liberal arts, and extensive administrative experience,” they wrote.

A search for the next Frank J. Guarini Associate Dean for International Studies and Interdisciplinary Programs will begin soon.