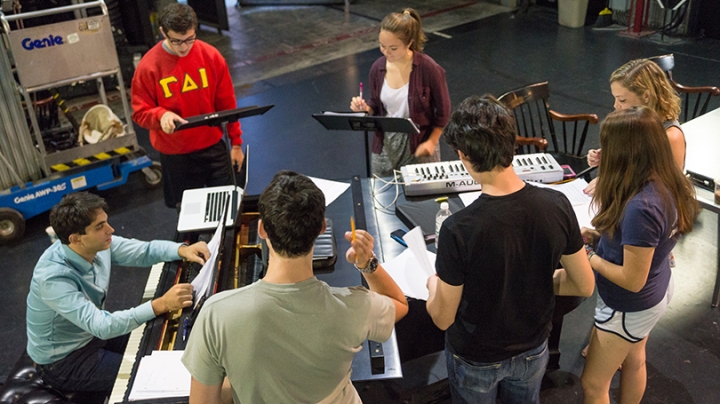 Students read through the play Bacha Bazi with a member of the New York Theatre Workshop in the Moore Theater at the Hopkins Center for the Arts in August 2013. (Photo by Eli Burakian ’00)
3/24/2017
Body

The New York Theatre Workshop plans to honor its partnership with Dartmouth’s Department of Theater at its annual spring gala in New York City in May.

Now in its 26th year, the NYTW’s three-week summer residency at Dartmouth brings artists—both famous and emerging—to Hanover to workshop plays in progress. Students from Theater 65, “New Plays in Development,” interact with writers, actors, and directors preparing for staged readings open to the public.

After their Hanover debut, many of these works-in-progress develop into highly successful New York productions, including Jonathan Larson’s musical Rent, and Anaïs Mitchell’s folk opera Hadestown. Based on the myth of Orpheus and Eurydice, Hadestown premiered to critical acclaim at NYTW’s East 4th Street theater last May, and it will move to Canada’s Citadel Theater in November.

Mitchell says the Dartmouth NYTW workshop was “a really safe, nurturing place to explore, far from the city. Artists were able to breathe and enjoy each other and learn from each other in a way that’s hard to come by anywhere else.”

Mary Lou Aleskie, incoming director of the Hopkins Center for the Arts, says Dartmouth’s partnership with NYTW is something to celebrate. “I really don’t know of a scenario anywhere else in the country where an Ivy League institution is collaborating with a New York producer and fosters an amazing output of work that involves students in the learning process,” she says.

The summer residency is invaluable to Dartmouth theater students, Aleskie says, because they get front-row seats on the creative process. And the benefits go both ways.

“The Dartmouth collaboration has shaped so many new trends in American theater,” she says. “To have smart students inform you and give you feedback, to be in a bucolic, well-supported place, to be able to think and create, and then to be able to show it to an audience that gives you further feedback—that kind of incubation is exceedingly rare.”

NYTW was a launch pad for Max Samuels ’15. Having participated in the 2013 summer workshop, he is about to perform in his first Off-Broadway play, Angry Young Man, a British comedy that is making its American premiere.

“Dartmouth has prepared me so, so, well for a life in theater,” says Samuels.

“My NYTW summer was incredible. We got to see premier New York theater makers honing their craft, and we got to see new plays and other projects take shape. We basically got to be flies on the wall in those rooms, and that would have been enough in itself, but we also got to contribute feedback each week.”

Samuels was involved in the development of two plays at NYTW. “The first, Another Medea, starred a wonderful actor, Tom Hewitt, in a one-man show—a modern adaptation of the Greek tragedy. He stood on stage for an hour and ten minutes, and just told the story beautifully.” The production had an Off-Broadway run in 2015.

“I also worked on a piece called Bacha Bazi, about a boy dancer in Afghanistan. It was a play with music that incorporated Motown hits with an Afghani spin,” says Samuels. “We had a Broadway music director work with us, we learned Afghani drumming techniques, and I got to be a part of the ensemble.”

After graduating from Dartmouth, Samuels earned his master’s at the London Academy of Music and Dramatic Art (LAMDA). “I fell in love with that school during my theater foreign study program (FSP) the summer before senior year,” he says. His FSP and the NYTW workshop, Samuels says, helped build the confidence he needed to apply to LAMDA, and provided him with important networking opportunities that helped jumpstart his career.

Samuels is just one of many aspiring Dartmouth actors to step into the spotlight after taking Professor of Theater Peter Hackett’s “New Plays in Development” course, which includes the NYTW partnership. Creating original theater pieces alongside major artists shows gifted students that “a productive life in the theater is possible, and for many, it is absolutely necessary,” says Hackett.

“It makes cutting-edge theater up close and personal,” says Laura Edmondson, an associate professor and chair of the Department of Theater. “We pride ourselves on offering transformative experiences to our theater students, and the NYTW residency is one of our crown jewels.”

That jewel continues to shine after 25 years, says NYTW Artistic Director Jim Nicola. “There’s no partnership I can think of that has been as steadfast and productive, or had as much impact, not only on the New York Theater Workshop, but I would even venture to say, the American and the world theater.”

The NYTW fundraising gala on May 15 at the Edison Hotel ballroom will be co-hosted by Rachel Dratch ’88. The former Saturday Night Live cast member will be joined on stage by Jesse Tyler Ferguson, who portrays Mitchell Pritchett on the ABC sitcom Modern Family. In addition to honoring the College, the celebration will spotlight Michael Greif, who directed the original 1996 production of Rent, earning a Tony award nomination for best direction of a musical.