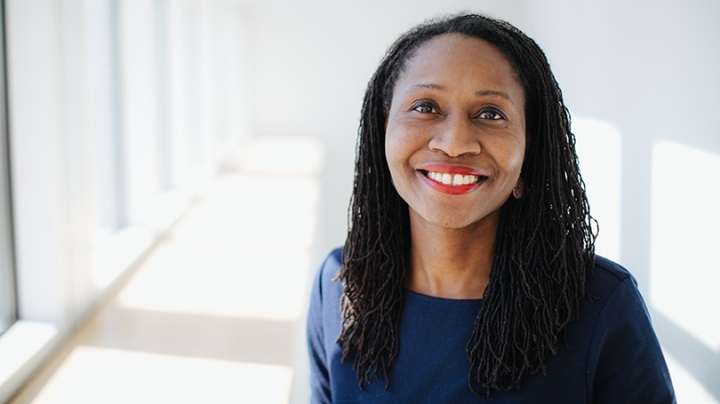 In tandem with the building of the newly independent nation of Ghana in the 1950s and ’60s, many of the West African country’s citizens played major, but often overlooked, roles in global movements such as nuclear disarmament, women’s rights, trade unionism, and human rights, says Associate Professor of History Naaborko Sackeyfio-Lenoch.

She has spent years teasing out the stories of these individuals and groups, which she hopes will broaden the historic understanding of the forces at work in the nation-building period and beyond.

Now, as a recipient of the Frederick Burkhardt Residential Fellowship for Recently Tenured Scholars, Sackeyfio-Lenoch will have support in completing her book telling the story of these little-known international actors. The book project is titled “Global Ghana, Itinerant Citizens and the Making of a New Nation.”

“The book will trace the contributions of various sectors in Ghana, political leaders as well as other actors, such as ordinary citizens, civilian groups, intellectuals, students, women’s organizations, and labor organizations. I am exploring how these various groups, the first leaders of a new nation, were engaging in global debates about a variety of pressing mid-20th century issues,” says Sackeyfio-Lenoch.

The research led her to archives and private paper collections in West Africa, Europe, and the United States. Much of the existing work on Ghanaian and West African history during this period focuses on nationalist impulses or on the ideas and influences of Ghana’s first president, Kwame Nkrumah, in the pan-African movement, she says.

“My book is hopefully contributing to new historiographies looking at how Africans were key players in international and global issues, not just in the context of colonialism or neocolonialist concerns, but from a new conceptual framework that allows us to examine how African states were understanding their place and their role in global affairs,” she says.

“I feel fortunate and humbled that the ACLS has provided this opportunity to focus on completing the book, but also for the college and history department supporting my long-term research,” says Sackeyfio-Lenoch, who became a tenured faculty member during the 2015–2016 academic year.

Sackeyfio-Lenoch is “richly deserving” of the Burkhardt prize, says Robert Bonner, chair of the Department of History and the Kathe Tappe Vernon Professor in Biography.

“This program, which helps field-shaping individuals to execute ambitious projects, will both advance her reputation as a practitioner of international history and contribute to what is an emerging area of strength within the ranks of the Dartmouth history department,” he says.

Sackeyfio-Lenoch has chosen Northwestern University, home of the longest-established programs of African studies in the United States, for her residency in the 2018-2019 academic year. The highly competitive Burkhardt fellowships provide a $95,000 stipend and a $7,500 research budget to up to 22 scholars each year to support yearlong residencies at institutions whose resources and scholarly communities are ideally suited to the proposed research project. The Burkhardt fellowships are sponsored by the American Council of Learned Societies, ACLS, with support from the Andrew W. Mellon Foundation.

The ACLS, a private, nonprofit federation of 74 national scholarly organizations, is the preeminent representative of American scholarship in the humanities and related social sciences.