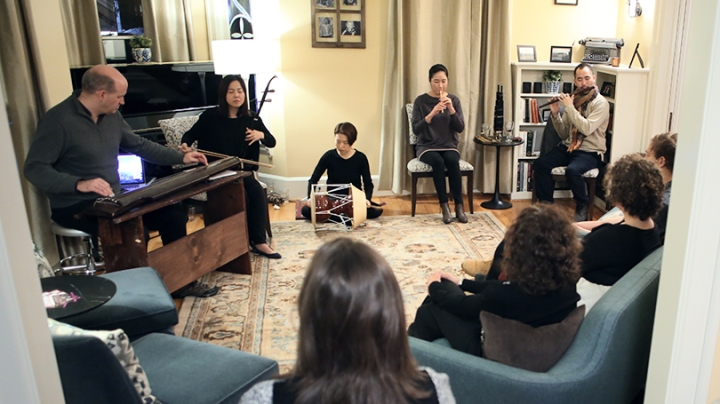 On a snowy Thursday night, Ryan Hickox, an assistant professor of physics and astronomy and the house professor for West House, welcomes five musicians and a mix of students and faculty to his home for an evening of music, conversation, and dinner. It’s part of an ongoing series of informal performances by visiting artists in Dartmouth’s house communities.

While their two small children play in another room, Hickox and his wife, Tammy Muccio, invite visitors to sit on comfy sofas in their living room. Only a few feet away from the audience, musicians from the Pan Project, an improvisational group spending two weeks in residence at the Hopkins Center for the Arts, demonstrate Asian instruments rarely seen in New England living rooms. Co-founder Jeff Roberts talks casually as he tunes up.

“We want to explore our creativity, both traditionally and in the modern context,” he says. “Some of these instruments were played in China and Korea in an informal setting like this, for a gathering of a few friends. What we want to do is communicate with our audiences, and relaxed environments like this is really what it’s all about.”

This was the second house concert that week for the Pan Project. The first was held in the home of Melanie Taylor, an associate professor of Native American Studies and the house professor for North Park House. Like West House, North Park is part of Dartmouth’s new residential house communities system, established as part of the Moving Dartmouth Forward initiative launched in 2015 by President Phil Hanlon ’77. The aim of the new system is to provide a permanent home base for all students, no matter where their Dartmouth careers take them, to foster greater faculty-student interaction beyond the classroom, and to give students opportunities to learn from and build relationships with fellow students from a wide range of backgrounds.

Members of the Pan Project perform at the home of Ryan Hickox, West House professor. From left are Jeff Roberts, gamin, Ying-Chieh Wang, and Kaoru Watanabe. (Photo by Eli Burakian ’00)

For Noah Manning ’17, student chair of West House, this is a welcome study break, and a chance to meet artists he would only have seen from a distance, at a formal concert in a large auditorium.

“Dartmouth has some of the most amazing researchers and performers coming through our campus, but students are incredibly busy, so it’s a nice opportunity to make events more convenient, to bring things into their spaces,” says Manning.

Convenience is one benefit of these house concerts, says Hickox. More important, he says, is the chance for students to find out what it takes to channel creative pursuits into professions.

“We want students to engage with people whose careers have led them on a lot of different paths—people who have managed to follow their passions in some way or another,” says Hickox. “So artists, especially successful artists we bring here, are a great example of that. And it’s wonderful for students to have that kind of engagement that’s not really possible in a big auditorium. Music feels more alive in a small space.”

Especially, says Dean of the College Rebecca Biron, when the musicians also discuss their work.

“When students get to know performers in a professor’s home, and learn about their lives, the arts become more accessible—more personal,” she says.

That’s been happening in house communities all year.

“We have done 26 of these events in house communities just since September,” says Stephanie Pacheco, the Hop outreach and arts education manager.

School House Professor Craig Sutton, an associate professor of mathematics, launched the year with an opening performance by FLEXN, a Brooklyn-based group that combines flexn, a street dance, with visual storytelling and social commentary. “It was a big dance party and a dessert reception,” says Pacheco. “What better way to kick off fall term?”

And spring term will get off to a rousing start, too, when Wakka Wakka Productions brings puppets to the Allen House home of Associate Professor of Engineering Jane Hill, as part of its Made in China production. Allen House will also host a presentation by Brooklyn-based composer Molly Herron. Both West House and East Wheelock House, whose house professor is Associate Professor of Mathematics Sergi Elizade, will welcome members of the Nile Project, singers and instrumentalists from six Nile countries who play danceable music. Apollo’s Fire, an early music ensemble, will come to the house center for North Park and South House, hosted by Taylor and South House Professor Kathryn Lively, professor of sociology. Sutton will open his home to Michelle Dorrance and Toshi Reagon, whose Blue Project combines tap dancing and the blues. And for those who want to learn drumming, West House will offer workshops by the World Music Percussion Ensemble.