Surveying the Colorado snowpack will aid water resource management in the West. 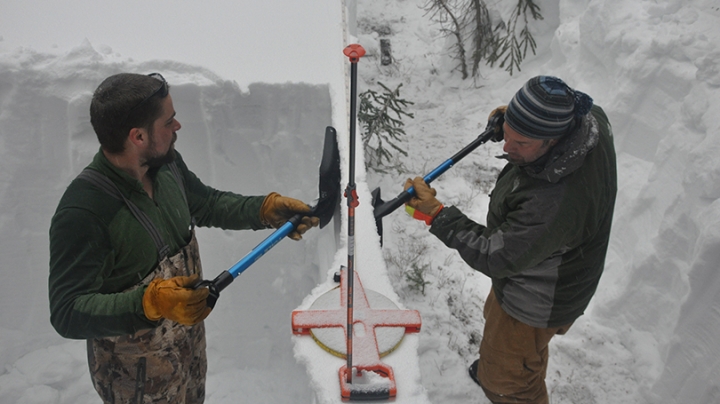 Three Thayer engineers are traipsing across a mountaintop in western Colorado, digging deep in the Rocky Mountain snow as part of a new NASA project known as SnowEx. The team is collecting data to support the design of a new NASA satellite that will be looking at snow, measuring its extent and the water it holds.

SnowEx is a five-year project that has enlisted the efforts of  Christopher Polashenski ’07, Thayer ’11, and Zoe Courville, Thayer ’08, who are both adjunct assistant professors at Thayer School of Engineering, and engineering graduate student Nicholas Wright.

The three are among more than 100 investigators working on the project. On the NASA website, officials explain that their satellites have measured snow cover for decades, but they have not been able to measure water content consistently over all snowy environments. SnowEx is intended to serve as the foundation of a NASA satellite mission that will be able to gather this previously inaccessible information.

“The snowpack is so important in the desert West because it provides all of the summer’s water. If you know how much is there in the first place, you can manage that water resource a lot more equitably and easily as summer progresses,” says Polashenski. In addition to being a Dartmouth faculty member, he is a research geophysicist at the U.S. Army Corps of Engineers Cold Regions Research and Engineering Laboratory (CRREL) in Hanover.

“We had come to the realization that we—the snow community—do not have a satellite to measure the stuff we want because we are not working together as well as we should be,” he says. “We wanted to get everybody on the same page about what is truly the best solution. A group of us—some at Dartmouth, some at CRREL, and some at NASA—all got together and began working together, and SnowEx was born.”

The SnowEx project got started with aircraft-mounted sensors, including altimetry LIDAR—a system that measures altitude using laser pulses. Radar was also employed, sending radar waves down through the snow and measuring the return signal.

But in the initial tests, the airborne sensors had not been performing well in trees and forested areas. “To find out why, project leaders decided they needed testing in a lot of different types of forest canopy—closed canopies, open canopies, and transitions back and forth,” says Polashenski.

At more than 11,300 feet, Colorado’s Grand Mesa—the largest flat-topped mountain in the world—was selected as the first year’s study area because of its varied terrain. “It has patches of trees that vary from really dense to not-so-dense, with meadows right next to them,” he says.

“Many different sensors were employed, testing their performance on measuring snow, not just in open areas but also under forest canopies,” says Polashenski, “and we were on the ground, trying to figure out what was there and comparing it to what the sensors were showing.”

Adjunct Assistant Professor Christopher Polashenski (left) and Thayer PhD student Nicholas Wright are digging a trench to inspect the layers that have formed in the snow pack and take density samples to determine the water content. (Photo by Christopher Hiemstra)

Nicholas Wright, a PhD student at Thayer, says, “Remote sensing using airborne sensors lets you look at the snow surface and get an idea of what the snow is like on the ground without actually having go out and measure it. Ground-based measurement is a lot of hard work, but it is significantly more accurate, and that is what we were doing.”

“The goal of the project overall is to test different ways of sensing the snow and push them to the breaking point,” Polashenski says.  “We will try to put the sensors in circumstances where they probably won’t work and try and figure out why. At the end of the five-year project, NASA should be in a position to decide which sensors would eventually be mounted on a satellite in space.”

Polashenski says that what ends up being the best sensor “will probably be some sort of multimodal array, using radar combined with a LIDAR, and perhaps integrating other technologies, such as a passive microwave sensor. This would detect microwave radiation naturally emitted from the earth and give an indication as to whether the surface has melted or not,” he says.

“All those approaches are being tested and evaluated, and many variations of each are now being flown over the mesa.”