Winners at the shark-tank-like event will get help making their ideas a reality. 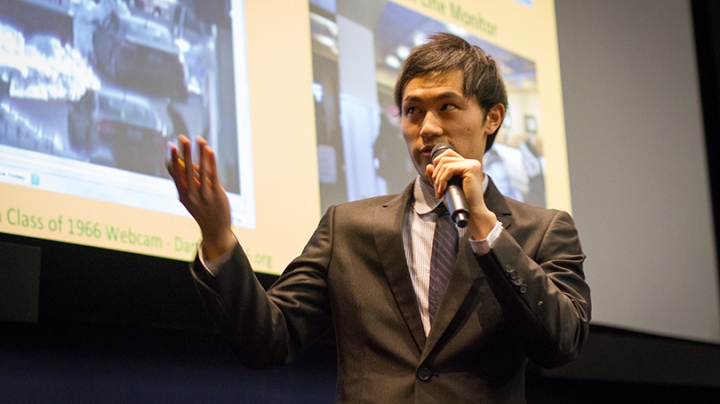 It’s pitching season again, and we don’t mean baseball. This week, 20 contestants will vie for cash or technical help in The Pitch, the shark-tank-like event jointly sponsored each term by DALI—the Digital Arts, Leadership, and Innovation Lab—and the DEN, the Dartmouth Entrepreneurial Network.

Each pitcher will have just two minutes to persuade judges—including audience members—to back his or her bright idea. The criteria: originality, feasibility, impact, strength of the development team, and effectiveness of the pitch. The competition is open to all Dartmouth students, faculty, and staff.

Tim Tregubov, DALI’s technical director, conceived The Pitch in 2014 as a way to broaden the mix of clients for whom DALI’s software designers were providing technical expertise. “We were doing a lot of research projects for external partners,” Tregubov recalls, “but I thought if we gave students, faculty, and staff a chance to compete for our support, we would strengthen a culture of innovation at Dartmouth.”

DEN quickly came on board, providing funding that, in combination with the technical assistance from DALI, gives winners a boost in product development and marketing. DEN Director Jamie Coughlin says the partnership with DALI is especially fruitful because “so many ideas these days have a software web element to them, whether it’s building a mobile app for the consumer, building something complicated for health care—software is the great permeator.”

One of the earliest Pitch success stories is a device that detects tobacco smoke in the air. FreshAir Sensors, the brainchild of Dartmouth chemistry professor Joseph BelBruno and Jack O’Toole, Tuck ’14, is now a thriving business. “They have lots of customers in the hotel trade,” says DALI Director Lorie Loeb.  A Pitch award also helped Proxi, a website and app connecting mental health patients with providers and supporters in the health care marketplace

Loeb says many other budding entrepreneurs have used support from DALI and DEN to get off square one. But over time, it’s become clear that not everyone needs the same kind of start-up help.

“Some people need money, but not technical assistance,” says Loeb, “and with others, it’s the other way around.” So this year, the contest rules have changed slightly. DEN and DALI will judge pitches collaboratively, as usual, but prizes will be awarded in separate categories. DALI will award its Partner Prize to an individual who will work with the lab’s developers to come up with a prototype over the course of one or two terms. DALI’s Team Startup Prize will give a student team working space, workshops, and mentoring. The in-kind value of the DALI awards is estimated at about $7,500 each.

Loeb says over the past four years, she’s seen a steady improvement in applications, in part because some people just don’t give up—they refine their presentations and bounce back the next term. “I love that we have serial pitchers,” says Loeb. And she says it can be just as useful to lose the contest as to win it, if that spurs a team to improve its product and its pitch.

That’s what happened to a dating app for black people called Bae (which stands for “Before Anyone Else”), developed by Jordan Kunzika ’16, Justin Gerrard, Tuck ’16, and his brother Brian Gerrard. It didn’t win any Pitch awards, but while an undergraduate, Kunzika, Bae’s chief technology officer, participated in several other DEN-sponsored programs. The app was recently acquired by the parent company of Tagged, one of the largest dating sites in the world.

What separates winning pitches from losing pitches, Tregubov says, is not just the brilliance of the idea, but the way the contestant uses just a few minutes to reel in judges with good storytelling about the problem the invention is designed to solve.

“You know,” says Loeb, “we all make pitches for something all the time—at job interviews, or just to people we want to influence. It’s a hugely important skill. And innovation, I always say, is a muscle. You have to build it, through practice.”

Because creative thinking and skillful persuasion benefit from feedback and practice, DEN now offers pitch clinics a few weeks in advance of the contest. 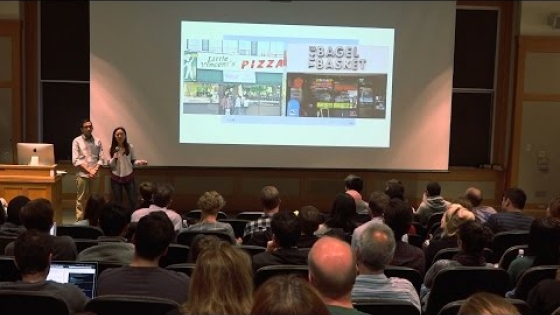 Loeb is gratified by the way The Pitch has grown into a campus-wide spectator sport, bringing contestants from all over campus to an event that’s “just a lot of fun to watch.”  The audience, she says, plays an important role, rewarding well-prepared pitches and weeding out ideas that might not be original or compelling enough to get support from the general public, or from venture capitalists.

“It’s like an open mic for ideas, in which we challenge people to move ideas out of their heads and onto paper and presentation,” says Coughlin.

The Pitch for this term takes place at 7 p.m. on March 2 in Filene Auditorium. Refreshments will be served. Winners will be announced at the end of the event.