The award by alumnae recognizes “pioneering efforts and professional achievements.” 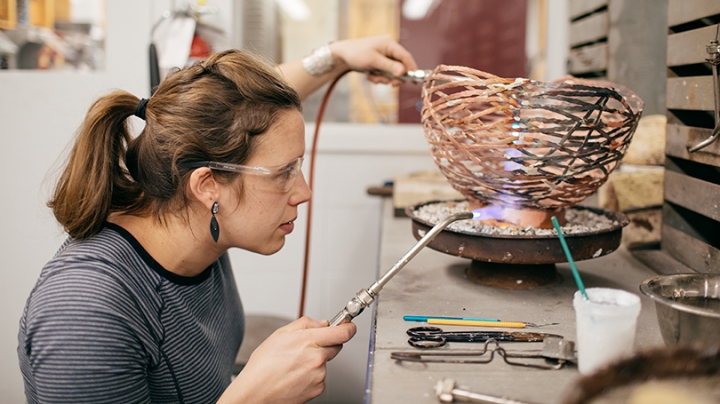 Tony Award-winning Broadway producer Daryl Roth is the 2017 recipient of the Centennial Circle Award, given each year to a person whose “pioneering efforts and professional achievements have had a significant impact on the advancement of women and the pursuit of a better world.”

The award is given by the Centennial Circle of Dartmouth Alumnae, each of whose members has contributed at least $100,000 toward need-based scholarships for undergraduate women at the College. To date, the Circle has raised more than $20 million. Founded in 2014 to honor the 100th anniversary of the Dartmouth College Fund, the Circle currently has 150 members representing four decades and is open to all Dartmouth alumnae.

“Part of our mission is to recognize outstanding women who are members of the Dartmouth community,” says Centennial Circle co-founder and Dartmouth College Fund Committee Chair Catherine Craighead Briggs ’88. “Daryl is a Dartmouth spouse and parent, a pioneer for women in the theater arts, and an inspiration for students and alumnae alike.  She is a perfect fit.”

Roth, the president of Daryl Roth Productions, has won 10 Tony Awards and London’s Olivier Award and has produced seven Pulitzer Prize-winning plays. Over a career spanning decades, she has produced more than 100 shows on and off Broadway.

“I am thrilled to receive the Centennial Circle Award,” says Roth. “Dartmouth has been part of our family for more than 50 years—we care deeply about the place, the people, the students. Thank you—It’s a wonderful honor to be recognized by a group of strong, committed alumnae from a school that is close to my heart.” The award will be presented to Roth at an April 21 luncheon in New York.

Roth’s current Broadway productions include Kinky Boots and Indecent. Groundhog Day and Hello Dolly are among her shows that will open soon. Roth is a member of the New York City Police Foundation Board of Trustees, the Mayor’s Theater Subdistrict Council, an honorary trustee of Lincoln Center Theatre, and she was twice included in Crain’s list of the 100 Most Influential Women in Business. The Daryl Roth Theatre, which she founded in 1996, is a landmark building in Manhattan’s Union Square.

Roth’s husband is New York City real estate developer and philanthropist Steven Roth ’62, Tuck ’63, a former Dartmouth trustee. The Roth family was the principal donor to the Roth Center for Jewish Life at Dartmouth and has endowed two distinguished professorships and an academic fellowship. Daryl and Steven Roth’s daughter, Amanda Roth Salzhauer ’93, is a member of the Centennial Circle.

Last year’s Centennial Circle Award recipient was Heidi Williams ’03, an economist at MIT and a 2015 MacArthur “genius” award winner for her research on patents and innovation in health care markets. Leymah Roberta Gbowee, a Liberian peace and women’s rights activist and recipient of the 2011 Nobel Peace prize, won the Centennial Circle Award in 2015. Gbowee, whose son attends Dartmouth, was awarded an honorary Doctor of Letters and delivered the College’s 2016 commencement address.

This year’s award, a copper bowl, evokes a much-loved ritual—the bonfire run. At Homecoming each year, after a massive bonfire is lighted on the Green, many first-year students run around the fire at least a hundred times—maybe more, if they add digits from their class years.

“The copper bowl incorporates those pathways, those circles,” says the Donald Claflin Jewelry Studio’s artist-in-residence, Case Hathaway-Zepeda ’09. “This is the third year I have built a bowl like this for the Centennial Circle Award. It always goes to someone who is incredibly influential and deserving, and I’m blown away to think that something I made will be in their possession.”