The music professor says the recognition makes her feel “like I can dream big.” 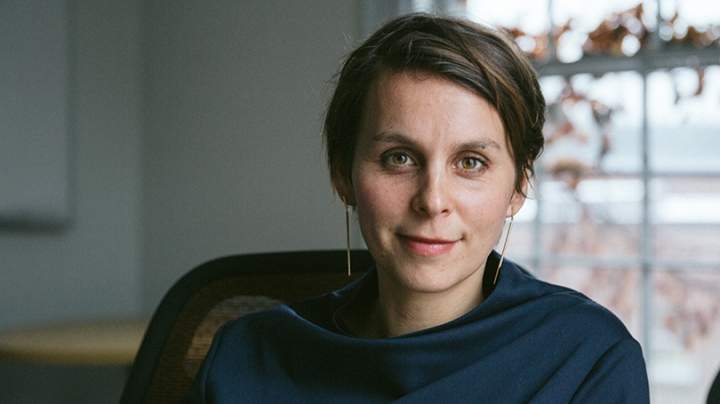 Being recognized by the Pulitzer and Guggenheim committees is a thrill, says Fure, who views the honors not as laurels to rest on but as tools to fuel more creation. (Photo by Robert Gill)
4/11/2017
Body

Composer Ashley Fure is having an extraordinary week—and an extraordinary year. On Friday, the assistant professor of music received word that she had been awarded a Guggenheim fellowship—making her one of 173 scholars, artists, and scientists in the United States and Canada to receive the honor this year.

Then, on Monday, she learned that her composition Bound to the Bow, which premiered last June at Lincoln Center in New York City, had been named a finalist for the 2017 Pulitzer Prize in Music.

Being recognized by the Pulitzer and Guggenheim committees is “a thrill,” Fure says. “It makes me feel unbridled and empowered—like I can dream big about my work and feel confident I’ll be able to find the resources I need to produce it.”

“Ashley Fure’s art is about stretching the boundaries of the human experience of sound,” says President Phil Hanlon ’77, who received the Guggenheim fellowship himself in 1992, and was appointed a member of the educational advisory board of the John Simon Guggenheim Memorial Foundation in August. “She is both a prolific composer on the world stage and a dedicated teacher who is contributing to the intellectual and cultural life of the Dartmouth campus. I am not surprised that she has received honors from Pulitzer and Guggenheim—but I could not be more proud.”

“Her work in contemporary music, and in breaking through the glass ceiling in the arts, is inspirational,” says Michael Casey, the James Wright Professor of Music and chair of the music department.

The Pulitzer website calls Fure’s Bound to the Bow “a mesmerizing orchestral piece, at once rigorous and evocative, by a sure-handed composer who takes her inspiration from Coleridge’s The Rime of the Ancient Mariner.” The work, which combines orchestra and electronic sounds, was commissioned for the 2016 New York Philharmonic Biennial.

The John Simon Guggenheim Memorial Foundation offers its fellowships as midcareer awards that give recipients time to work on projects in their fields. Fure was chosen from nearly 3,000 applicants. The award comes as one of Fure’s major works, an opera called The Force of Things: An Opera in Objects, that will be performed by the International Contemporary Ensemble at Montclair State University in Montclair, N.J., Oct. 6 through 8.

Developed in collaboration with her brother, architect Adam Fure, The Force of Things premiered in Darmstadt, Germany, in 2016. Staged in an installation space that creates an immersive environment for the audience seated under a canopy of latex hides and hanging objects, the piece combines projected electroacoustic sound and live instrumentalist performance to create a drama in which objects, rather than humans, are the central source of drama, Fure says.

Fure, who joined the music department faculty in 2015, has won numerous other awards, including, last year, a Foundation for Contemporary Arts “Grants to Artists” award.

But she sees these recognitions not as laurels to rest on but as tools to fuel more creation. “That’s what this stuff is about—not the ego, but the making,” she says. “I want to make my work. And these honors help forge an infrastructure in which that process can unfold with less impedance.”

And receiving these honors does not appear to have slowed her work, even in the short term. “I am sprinting to finish a string quartet score that I hope to have done by the end of today,” she says.

Several members of the Dartmouth faculty have received Guggenheim fellowships in the past, including, last year, English professor Cynthia Huntington, the Frederick Sessions Beebe ’35 Professor in the Art of Writing; and history professor Darrin McMahon, the Mary Brinsmead Wheelock Professor.

Dartmouth alumni recognized in the past by the Pulitzer committee include Dan Fagin ’85, who won the prize for general nonfiction for his book Toms River: A Story of Science and Salvation in 2014; Matthew Sturdevant, MALS ’08, who was part of a team from the Hartford Courant that was a finalist for breaking news reporting in 2013; and Wall Street Journal columnist Joseph Rago ’05, who received the award for distinguished editorial writing in 2011.