Cornel West to Speak on Political Struggle in the Trump Era

The Harvard professor and public intellectual will be on campus April 27. 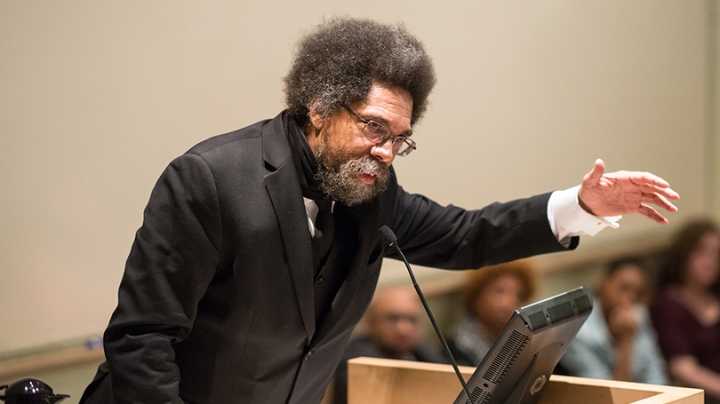 Cornel West, speaking at Dartmouth in 2013. The activist and public intellectual returns to campus April 27 to discuss “Intellectual Vocation and Political Struggle in the Trump Moment.” (Photo by Eli Burakian ’00)
4/17/2017
Body

Harvard professor, political activist, and social critic Cornel West will be on campus Thursday, April 27, to speak on “Intellectual Vocation and Political Struggle in the Trump Moment.” The lecture, which is free and open to the public, begins at 5 p.m. in Filene Auditorium at Moore Hall.

A scholar of American pragmatism from Emerson to the present, West is an outspoken critic of hypocrisy in American political culture and a fierce advocate for civil rights and social justice.

“Cornel West is one of the most important philosophers and public intellectuals alive today, and his talk promises to be a major event,” says Barbara Will, associate dean of arts and humanities. “We are so lucky to have him on campus.”

The author of more than 20 books, including The American Evasion of Philosophy: A Genealogy of Pragmatism, Race Matters, Democracy Matters, Brother West: Living and Loving Out Loud, and Black Prophetic Fire, and editor of more than a dozen others, he currently teaches at Harvard Divinity School, where he is a professor of the practice of public philosophy. He has also taught at Union Theological Seminary and Princeton University.

West frequently makes headlines for his political action, including his participation in protests against police violence following the 2014 shooting of Michael Brown in Ferguson, Mo., at which West was twice arrested. He was famously critical of President Obama’s economic and foreign policy, and last year was a prominent endorser of Sen. Bernie Sanders, and later Green Party candidate Jill Stein, during the presidential election.

He is also a familiar figure in popular culture, with cameo appearances in The Matrix films and as a frequent guest on The Bill Maher Show, The Tavis Smiley Show, CNN, and C-Span. He has even been spoofed on Saturday Night Live, where he has been impersonated by comedian Kenan Thompson.

This summer, West will be in residence at Dartmouth as a visiting scholar, teaching a course on “The Historical Philosophy of W.E.B. Du Bois,” cross-listed in English and African and African American studies.

“The humanities series brings great voices in the humanities to Dartmouth to engage with the broad community on topics relevant to our contemporary moment,” says Will. “We are showcasing people who have made a major impact on current public debate.”

In November 2016, the series brought to campus William Deresiewicz, author of Excellent Sheep: The Miseducation of the American Elite and the Way to a Meaningful Life, to speak on “Politics, Privilege, and the Humanities.”

West last spoke at Dartmouth in 2013 as part of the annual seminar and public lecture series organized by the Gender Research Institute at Dartmouth.