The change would eliminate College supervision of those living in a student residence. 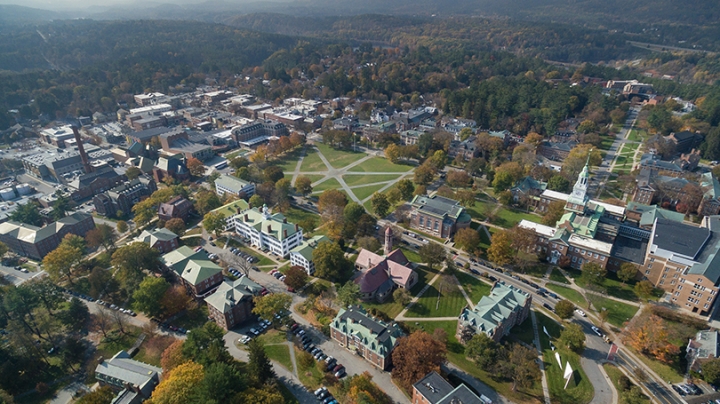 Dartmouth is opposing a change in how the town of Hanover’s zoning regulations define a student residence. The proposal—which the town’s planning board also opposes—would eliminate the existing requirement of College recognition and supervision of those living in the residence. The proposed change will go before voters in Hanover’s annual Town Meeting balloting on May 9.

The proposed zoning amendment—Article 9 on the ballot—is before voters as the result of a petition drive organized by the attorney representing two fraternities that have been derecognized by Dartmouth due to repeated instances of misconduct. The amendment would change the definition of a student residence in Hanover’s zoning regulations and allow fraternities, sororities, and other organizations to operate residences that have no connection to the College and require no oversight by College officials.

Members of the town’s planning board have unanimously voted against the proposed zoning amendment, an advisory opinion that will appear on the ballot.

“Allowing fraternities and other groups to house large numbers of students without any affiliation or supervision by Dartmouth is bad policy and has significant public safety implications for the town. In the absence of College supervision, Hanover’s police and fire departments could be faced with having to police much more directly the behavior of Dartmouth students living in fraternities off campus,” says Robert Donin, Dartmouth’s general counsel.

The town’s zoning ordinance allows no more than three unrelated persons to live together unless an exception applies. Under current law, an exception has been allowed for fraternities and other student houses that are affiliated with and supervised by Dartmouth. The amendment seeks to end the requirement of supervision by the College, which Donin says poses a risk to health and safety and shifts responsibility from Dartmouth to the town.

“Supervising student life should be Dartmouth’s responsibility, not the town’s,” he says. “The College’s policies and procedures focus on student learning, health and safety, and positive community development. When an organization fails to meet College expectations and is derecognized—the avenue of last resort—they have no place at Dartmouth, or in Hanover,” says Donin.

Residents will decide Article 9 in the voting booth. The May 9 voting takes place from 7 a.m. to 7 p.m. at the Hanover High School gymnasium. The business portion of the annual town meeting begins at 7 p.m., also at the school. The petitioned zoning change, one of eight zoning questions before voters, is not up for discussion at the meeting, where voters will consider other matters such as whether to approve the town’s annual budget.

The vote to change the definition of a student residence must pass by at least two-thirds of those casting ballots. State law gives the owners of 20 percent of the property that would be affected by such a vote the right to request the two-thirds threshold for passage of the zoning change. Dartmouth made such a request to the town this week.

Donin says the vote on Article 9 should not be confused with a similar-sounding question under Article 6, which is also before voters. The College has taken no position on Article 6, and a majority of town planning board members are in favor of the article, which planners proposed.

This zoning change would continue to allow student residences in the town’s “institution” district, where much of Dartmouth’s property is located. “The Planning Board thinks it is a good idea to concentrate these types of student residences close to campus,” says Hanover’s annual town report regarding the items voters will decide on May 9.

The Article 9 vote comes on the heels of an April 11 New Hampshire Supreme Court ruling that affirmed earlier court decisions in finding that Alpha Delta fraternity, which was derecognized by the College in 2015, may not operate as a student residence because it is no longer a recognized student organization. Use of the property would violate the town’s zoning ordinance, the court said. The matter has been on appeal before the town and in state courts since 2015.

Article 9 would remove existing language in the town’s zoning regulations that defines a student residence as “operated in conjunction with another institutional use.”

Alpha Delta and the fraternity Sigma Alpha Epsilon have been derecognized by Dartmouth as a result of significant student behavioral issues over the course of several years.

The house owned by the Alpha Delta Corp. is located on East Wheelock Street. The fraternity was derecognized by the College in 2015. (Photo by Eli Burakian ’00)
Written by
Susan J. Boutwell
Share this
FacebookTwitterEmail