Six undergraduates traveled to Sweden to compete against 17 teams from around the world. 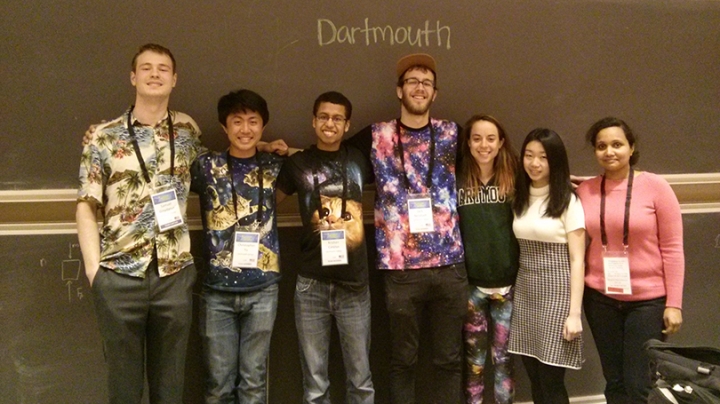 Six Dartmouth students traveled to Gothenburg, Sweden, last week to compete against 17 other teams from around the world in the ninth International Physicists’ Tournament (IPT). Dartmouth was the first United States team ever to qualify for the competition.

In the months leading up to the competition, teams prepared by working on solutions to the 17 physics problems that would be used in the tournament. The problems spanned topics in physics from magnetism to thermodynamics. Problems included estimating the height of a popcorn kernel from the sound of its pop and exploring why fluorescent lamps flicker.

In the tournament, teams face off against each other in “physics fights.” The rules are simple, and capture the essence of scientific research: Challenge a team on a problem; the team members present their results; you critique their solution; and a third team reviews the battle.

While results matter, the way scientists present and discuss them is also important. The IPT format has gained momentum in top European schools such as France’s Ecole Polytechnique and Sweden’s Royal Institute of Technology, where preparation for the competition is part of their coursework.

“I was excited about working on these problems,” says Greydanus. “There are no easy solutions. I learned that you can only really understand a concept if you can apply it to the real world creatively, and that’s what IPT is about. Working on this self-driven project has taught me to act like a researcher in how I solve problems and explain them to others.”

IPT was also a chance for the Dartmouth students to form friendships with the best physics students from around the world. “Although it was a competition, the other teams were very supportive and we made friends easily,” says Lane. “It was interesting to see the similarities and differences between teams in their approaches to the problems. And it was a great way for us to learn from some impressive presentations.”

The students ended IPT 2017 already looking forward to next year. “Having seen how the tournament works, I think we can send a very competitive team next year,” says Canzius. “We placed 15th, and hope to improve upon that ranking in the future,” adds Lane.

The trip was funded with a grant from the Student Experiential Learning Fund, which is administered by the Dartmouth Center for the Advancement of Learning in partnership with the Center for Professional Development.

—Margaret Lane ’17 and Sam Greydanus ’17 contributed to this story.