The residency will bring writers and artists to campus throughout the spring. 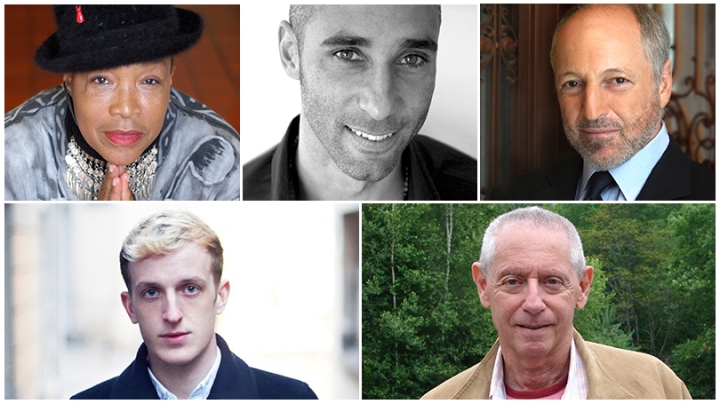 The Montgomery Fellows program will bring five writers, artists, and performers to campus this spring to engage with students, faculty, and the community.

Each of the fellows will be in residence for about a week at a time, says Klaus Milich, the program’s director. During their residencies, the fellows will visit classes, meet with faculty and students, and give a public lecture. In addition, Milich says, the week of May 1 will be a celebration of “Poetry and Politics,” with talks by Dartmouth literary scholars and readings by Montgomery fellows and members of the faculty.

“Montgomery is bringing an incredible breadth of talent to campus this term,” says Milich. “These fellows are internationally renowned writers and artists who will be engaging intensively with our community.”

Although the residencies are sometimes only a week long, Milich stresses that the Montgomery Fellowship is a lifelong distinction, one with long-term benefits for Dartmouth. “We are building ongoing relationships with some of the most accomplished people in the world, and creating opportunities for students and faculty to engage with them on and off campus,” he says.

Photographer Fazal Sheikh’s images of refugees and other marginalized people from around the world have earned him numerous honors, including a MacArthur “genius” grant and a Guggenheim fellowship.

Sheikh will be on campus the week of April 23, and will speak at 4:45 p.m. on Tuesday, April 25, in Loew Auditorium at the Black Family Visual Arts Center. The subject of his talk will be his recent work, The Erasure Trilogy, a series that “explores the anguish caused by the loss of memory—by forgetting, amnesia or suppression—and the resulting human desire to preserve memory, all seen through the prism of the Israeli-Palestinian conflict,” according to Sheikh’s website.

The week of April 23 also brings award-winning memoirist, novelist, and literary scholar André Aciman to Hanover. Aciman received the 1995 Whiting Award for his memoir Out of Egypt, which chronicled his childhood growing up Jewish in postcolonial Alexandria. More recently, his novel Call Me By Your Name won the 2007 Lambda Literary Award for gay fiction. His work has appeared in The New Yorker, The New York Review of Books, and The Paris Review, among other publications. An expert on Marcel Proust, he is a distinguished professor at the Graduate Center of City University of New York.

Actress and performing artist Rhodessa Jones is the co-artistic director of the San Francisco-based theater company Cultural Odyssey and founding director of the Medea Project, which brings performance workshops to incarcerated women and women living with HIV. She will be on campus the week of May 1 in conjunction with the Gender Research Institute at Dartmouth (GRID) spring seminar, “Radical Unlearning: Feminist Reflections on Transgression, Humility, and Chaos.”

Jones will speak on “Gathering Stories at the Edge of the World” at 4:30 p.m. Wednesday, May 3, in Carpenter Hall 13.

Édouard Louis’ debut novel, En finir avec Eddy Bellegueule (The End of Eddy), was an overnight bestseller when it was in published in France in 2014, when the author was 22 years old. The novel, which tells the story of growing up gay in a violent working class community in northern France, has been translated into more than 20 languages, and will be published in the United States by Farrar Straus & Giroux in May.

Louis is also known for his efforts to counter the rise of the extreme right in France. In September 2015, he and philosopher Geoffroy de Lagasnerie published a “Manifeste pour une contre-offensive intellectuelle et politique” (“Manifesto for an Intellectual and Political Counteroffensive”) in Le Monde that excoriated the normalization of far-right discourse in the media and laid out principles for left-wing intellectual engagement in France’s public debate. That manifesto was published in English in the Los Angeles Review of Books.

Louis’ residency at Dartmouth—a first stop on his American tour for The End of Eddy—will include a public talk and book signing at 4 p.m. Thursday, May 18. The location has yet to be announced.

Cuban-born poet José Kozer will be on campus the week of May 1 in conjunction with the series “Poetry and Politics” (see below). The author of more than 60 poetry collections, his work has been translated all over the world. In 2013, for his lifetime contribution to poetry, he won the Pablo Neruda Ibero-American Poetry Prize, presented to him by Chilean president Sebastián Piñera.

Kozer will read at 4:30 p.m. May 2 in the Wren Room in Sanborn with Roth Distinguished Visiting Scholar Enrique Celaya Martínez, who was in residence as a Montgomery Fellow in 2014 and 2015.

A Week of Poetry and Politics

Beginning May 1, Dartmouth is celebrating a week of “Poetry and Politics—Politics of Poetics” organized by the Montgomery Fellows Program, the Leslie Center for the Humanities, and Associate Professor of English Vievee Francis.

Events begin at 3 p.m. Monday, May 1, in Sanborn Library, with a talk on the week’s theme by postdoctoral fellow Nathalie Batraville, a member of the Society of Fellows, followed by a reading by poet Cleopatra Mathis, who retired last year as a professor of English and the Frederick Sessions Beebe ’35 Professor in the Art of Writing. The author of numerous award-winning books of poetry, Mathis’ most recent collection is The Book of Dog.

At 4:30 p.m. Tuesday, May 2, in the Wren Room in Sanborn, José Kozer and Martínez Celaya will read from their work. Best known for his painting and sculpture, Martínez Celaya is also an accomplished scientist and poet who has said his art is “in some ways more connected to poetry than to visual arts.”

On Wednesday, May 3, award-winning Palestinian-American poet Naomi Shihab Nye will read from her work in Haldeman 246, beginning at 4 p.m. Nye has published more than 30 books of poetry, as well as essays and children’s novels and poems, and has received numerous literary awards, including honors from the International Poetry Forum, four Pushcart Prizes, and a Guggenheim Fellowship. In 2009 she was elected a chancellor of the Academy of American Poets. Nye’s visit is part of the Leslie Center’s speaker series.

At 4:30 p.m. Thursday, May 4, poet Gary Lenhart, a senior lecturer in English, and Woon-Ping Chin, a visiting professor in Asian American studies and theater, will read from their work in the Wren Room in Sanborn. Lenhart is the author of six books of poetry, including, most recently, The World in a Minute. Chin, a memoirist, playwright, and translator, is the author of two books of poetry, In My Mother’s Dream and The Naturalization of Camellia Song.

At 4:30 p.m. on Friday, May 5, Frederick Sessions Beebe ’35 Professor in the Art of Writing Cynthia Huntington will read from her work in the Wren Room in Sanborn. Her most recent book of poetry, Terra Nova, was published this year. Her fourth collection, Heavenly Bodies, was a finalist for the 2012 National Book Award.

For nearly four decades, the Montgomery endowment, created by a gift from Kenneth ’25 and Harle Montgomery, has brought distinguished guests to campus to stay in the Montgomery House on Rope Ferry Road and live, work, teach, and engage with the Dartmouth community.