Gift of $5 million will benefit student-athletes at all levels of competition. 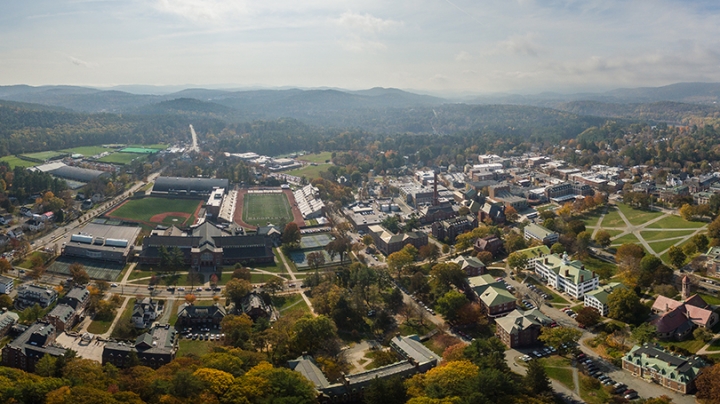 Barbara and Ed Haldeman ’70, longtime volunteer leaders and generous benefactors of the College, and their three children and their spouses have endowed the athletic director’s position, a $5 million gift that will benefit Dartmouth student-athletes in perpetuity.

“A distinguishing characteristic of Dartmouth is how important athletics are to a large number of our students,” says Ed Haldeman, a former chair of the board of trustees who has known Harry Sheehy, Dartmouth’s director of athletics, for nearly two decades. “Because athletics have been so important to our family and because we think Harry is the model of what we want in an athletic director, we’re delighted to endow the position.”

As a result of the endowment, Sheehy will be the Haldeman Family Director of Athletics and Recreation.

The Haldemans’ gift, made through the Haldemans’ family foundation, will substantially expand the athletic director’s ability to invest in programs and innovations that boost Dartmouth’s competitive advantage and enhance the student-athlete experience.

“I’m grateful to the Haldeman family for recognizing the value of athletics and just how much it contributes to the Dartmouth community,” says President Phil Hanlon ’77. “Through sport, our coaches teach our students about leadership, resilience, and teamwork—three skills that will serve them well throughout their lives and careers. I want to thank the Haldemans for this generous gift, which will elevate our sports programs and help transform our student-athletes into tomorrow’s leaders.”

The Haldemans’ gift is the latest in a series of philanthropic commitments that are strengthening athletic programming. During the past three years, Dartmouth has received gifts totaling more than $24 million from alumni and friends to endow a dozen coaching positions in the Department of Athletics and Recreation. Private gifts have also created an endowment for the Dartmouth Peak Performance program and will fund a new indoor practice facility.

Barbara and Ed Haldeman met Sheehy in the late 1990s when he was athletic director at Williams College, where their son Matt played squash and tennis. Their two daughters, Charlotte Haldeman Whitmore ’03 and Catherine Haldeman Hale ’08, were members of the varsity squash team at Dartmouth.

“Harry is everything that an athletic director should be,” says Barbara Haldeman. “He sees athletics in the bigger context of what the College is trying to provide. Even though he’s committed to quality and winning, it isn’t just for the sake of winning. It’s all in the context of building better citizens down the road.”

A decade ago, the Haldemans made the lead gift for the Haldeman Center, named in honor of Ed Haldeman’s parents and home to several academic offices, including the John Sloan Dickey Center for International Understanding. They have been dedicated supporters of several Big Green sports programs for decades, reflecting a commitment to the importance of athletics in students’ lives that is highlighted by this most recent gift.

Approximately 1,000 Dartmouth students participate in varsity sports—nearly one-quarter of the College’s undergraduate population—and many hundreds more play on club and intramural teams. In total, about 75 percent of all undergraduates participate in sports of some kind each year.

“This is a landmark gift that will allow all Dartmouth athletic directors going forward to make strategic investments that produce the finest Big Green programs possible,” says Sheehy. “I am so humbled that the Haldemans would see fit to do this, and to be the first Haldeman Family Director of Athletics and Recreation.”