Morton Hall Work Is on Track for Fall Return of Students

The post-fire renovations add 17 beds and an elevator to East Wheelock cluster residence. 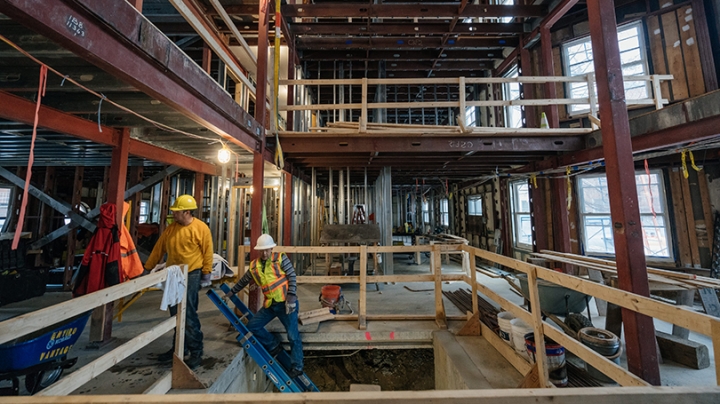 Renovations to Morton Hall after an Oct. 1 fire are on track for students to return to the East Wheelock residence hall in the fall. No one was injured in the early morning blaze, but smoke and water damage forced residents to relocate. (Photo by Eli Burakian ’00)
4/19/2017
Body

Renovations are on track to open Morton Hall in the fall. The undergraduate student residence hall has been closed since it was damaged in a fire on Oct. 1.

Among improvements the renovation will bring are an increase in the number of beds from 67 to 84, installation of an elevator, and the configuring of a central common area on each of the building’s four floors, says Mike Wooten, associate dean of residential life.

“It’s been a very aggressive construction schedule. I think everybody is working as hard as they can to keep this on target, and we’re excited to have the building back in the rotation in the fall,” Wooten says.

There were no injuries when the four-alarm fire struck in the early morning hours of Oct. 1, but smoke and water damage left Morton Hall uninhabitable. Building residents were quickly relocated to temporary housing spaces around campus. Fire officials determined the fire was caused by students using a small charcoal grill on a flat section of roof outside a residence hall window. The grill had been left unattended at the time of the fire.

The College began reclamation, redesign, and renovation work with the aim of restoring the living spaces as soon as possible, Wooten says.

The fire not only displaced students, it also disrupted a community, Wooten says. “So getting Morton back online means that East Wheelock House members can return. We can bring them back home,” he says.

Morton, Andres, McCulloch, and Zimmerman halls make up the East Wheelock house cluster, which was established in 1996 as Dartmouth’s first "intentional community," and later became one of the models for the campus-wide residential community system introduced in 2015.

Project contractor North Branch Construction has fenced off a perimeter around Morton Hall and construction vehicles will be entering and exiting the site via East Wheelock Street between 7 a.m. and 5 p.m. five days a week through the summer. Access to East Wheelock’s Brace Commons will continue to be available from the west side of the site.

Among improvements the renovation will bring are an increase in the number of rooms from 67 to 84, installation of an elevator, and the configuring of a central common area on each of the building’s four floors. (Photo by Eli Burakian ’00)
Written by
Bill Platt
Share this
FacebookTwitterEmail
Quoted
Quote