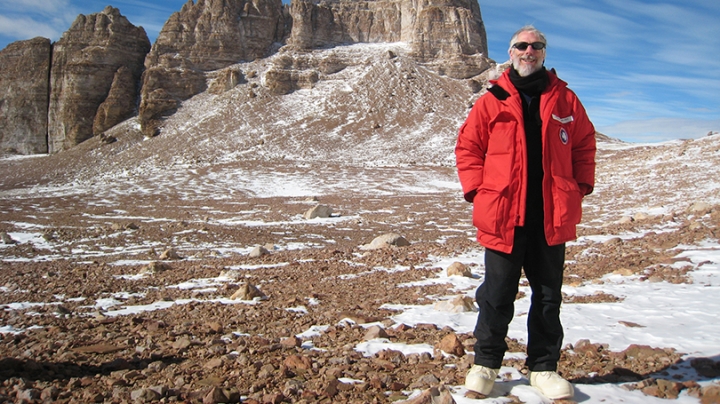 Professor Ross Virginia stands in Antarctica’s Virginia Valley, named in his honor to commemorate his decades of research on the ecosystems of the continent’s dry valleys, the coldest and driest place on Earth. (Photo courtesy of Ross Virginia)
4/10/2017
Body

Just back from his final trip to Antarctica as an investigator for the Long Term Ecological Research Program, Professor Ross Virginia breaks off a conversation and strides across his office to pull out a hundred-year-old volume of Robert Falcon Scott’s The Voyage of the Discovery.

“This is his first expedition. It’s just a treasure,” says Virginia, the Myers Family Professor of Environmental Science.

“I’m just amazed and fascinated by all of this,” he says as he thumbs through the collected journals of the British explorer who, in 1912, was the second man to reach the South Pole (achieving the feat just 34 days behind Norwegian explorer Roald Amundsen).

“If you look at my bookshelf you know that I’m really deep into the history of exploration. I have been ever since I was a kind of nerdy junior high kid,” he says. “At that age I was reading all the books about Shackleton, Scott, and the explorers, and just imagining these distant, faraway places. That’s always grabbed a part of my mind.”

This fascination with polar exploration helped get him to Antarctica, Virginia says, but it was the incredible potential for scientific discovery in the coldest, driest place on Earth that hooked him. He just completed his 27th year of research on Antarctica that included 21 trips to the frozen continent.

“What kept me going back and forth to Antarctica for all these years is that the sense of discovery in your science is very high there. There are very few scientists who have been there before, so it’s a wide open environment scientifically,” he says.

Since the early 1980s, Virginia and longtime colleague Diana Wall, the Colorado State University Distinguished Professor of Biology, had been studying the conditions that support life in soils. They were trying to determine the outer limits to survival. That’s when a colleague sent them a soil sample from McMurdo Station, the U.S. Antarctic research center established in 1958. All traffic in or out of Antarctica still goes through McMurdo.

“There’d been reports, even going back to Scott, that there was some life in the soils, but they also called them ‘the valleys of the dead.’ They saw no living thing,” Virginia says. “So we had this little pile of soil. Diana did her magic and did the extraction, the process that shows us if there are animals in the soil, and there they were. We found microscopic worms called nematodes.”

In the intervening years, the National Science Foundation has funded four rounds of six-year grants supporting the Antarctic Long Term Ecological Research Project, which has brought hundreds of scientists and students, many from Dartmouth, to the Arctic dry valleys, and has produced a significant body of research on the ecology of the continent.

“Our work has gone from ‘is life there?’ to ‘where might it be?’ to “what controls the diversity of life?’ ” Virginia says. “Now we’re looking at how this connects to the carbon cycle and greenhouse gas emissions—all the things we do in other ecosystems. So our work is not restricted to understanding Antarctica, it’s connected to these larger questions.”

Virginia and Wall have led research teams of undergraduate and postdoctoral students to Antarctica every year since the project began. Then, last year, with a new NSF funding cycle coming up, they saw a logical breaking point, Virginia says.

“It’s time. As much as I’d like to keep doing this—I’m doing great science—I can see that it’s not realistic for me to think that six years from now that I could handle the physical aspects of the science,” says Virginia, who is 66.

“This last season, for both Diana and me, was bittersweet really,” Virginia says. “It was sort of a retrospective. You’re there and realizing that you won’t be there again in that same context and you’re going to this site and this site and you’re thinking, wow, this may be the last time I see this view from this research site, or the last time that I’m here with this group of people.”

While Virginia is ending a chapter of his work, he is far from closing the book. As the director and the driving force behind Dartmouth’s Institute of Arctic Studies, a lead scholar for the Fulbright Arctic Initiative, and a board member for the Dartmouth-based University of the Arctic Institute for Arctic Policy, co-founded with the University of Alaska at Fairbanks, Virginia remains a leading scholar and educator in the study of polar ecology and the critical impact of climate change on these regions. He has also become an influential voice in the developing fields of international environmental law and policy.

Since coming to Dartmouth in 1992, Virginia has built the Institute of Arctic Studies, based in the John Sloan Dickey Center for International Understanding, into one of the top centers of Arctic research in the nation. Dartmouth and the institute have trained and supported many of the leading scientists in the field today.

Virginia has worked closely with many of these scientists as undergraduates, graduate students, or postdocs, personally recruiting them into the Arctic program and launching many careers. He is known as a generous scholar and a caring mentor.

Ruth Heindel is finishing her dissertation on the evolution of landscapes and soil development in arid polar regions as a postdoc in Virginia’s lab. When she was looking for grad schools, Dartmouth’s Integrative Graduate Education and Research Traineeship (IGERT) program for Arctic regions caught her attention, and she contacted the College for more information.

“Ross reached out to me and said, ‘It looks like you are interested in polar studies. You should definitely come to Dartmouth, and why don't you work with me?” Heindel says.

Virginia has been both a supportive and a hands-off adviser, she says. “Ross is always there. He'll always support you in your decisions, but he won’t make them for you. He really values the whole student, rather than just the scientist. That’s something everybody appreciates about his mentoring.”

Alexandra Stendahl ’19 can also testify to that. She first learned about Dartmouth when she traveled to Greenland as a high school junior. She was participating in the Joint Science Education Project (JSEP) co-led by Dartmouth and the government of Greenland, with support from the National Science Foundation. The program enables U.S. high school students to travel to the polar regions and participate in hands-on science, much of it led by Dartmouth undergraduate and graduate students.

Stendahl was hooked. With the goal of pursuing Arctic studies, she applied to Dartmouth.

“I looked up his lab before school started my freshman year and sent him an email to ask if there was any way I could get involved,” Stendahl says. “He emailed me right back saying, ‘Wow, it’s so great that a JSEP student is here and is so interested in the Arctic. We’d love to have you.”

Virginia returns to Greenland this summer with the JSEP program, leading a group of Dartmouth students, including Stendahl, who will be conducting field work with a new crop of high school juniors.

As for the future of the dry valley work, the researcher who will take over Virginia’s role on the Long Term Ecological Research Program is John “Jeb” Barrett, a biology professor at Virginia Tech. Barrett was Virginia’s postdoc for six years before taking his faculty position.

“I introduced him to the dry valleys, he grew up, we’ve published a zillion papers together, he supervised Dartmouth students while he was here,” Virginia says. “He and I were collaborating, and now it’s his thing. I'm kind of off to the side, and eventually he’ll be training somebody else. So the lineage and the network just keeps rolling forward.”

Virginia knows his ties to Antarctica will never be broken.

“This whole season was full of excitement and just reflection, and a little bit of ‘I’m going to miss this,’ but at the same time, I still have a year’s worth of papers to work on with these same people, so the science moves ahead. What changes is my direct walking across the ground in the dry valleys,” he says.

“But I might just make it back on a different grant,” he adds, quietly.

Whether or not Virginia finds a way to get his feet back on the ground in Antarctica, his mark on the continent won’t fade. In recognition of their contribution to the science and ecology of the region, two adjacent geological features bear the names Virginia Valley and Wall Valley.

“It’s really pretty cool to have that little piece of real estate that acknowledges our time there. That’ll be there just like when I see something named for Scott and his ships and the explorers in all these places,” he says.