Area musician makes a full recovery after cast and crew use CPR to restart his heart. 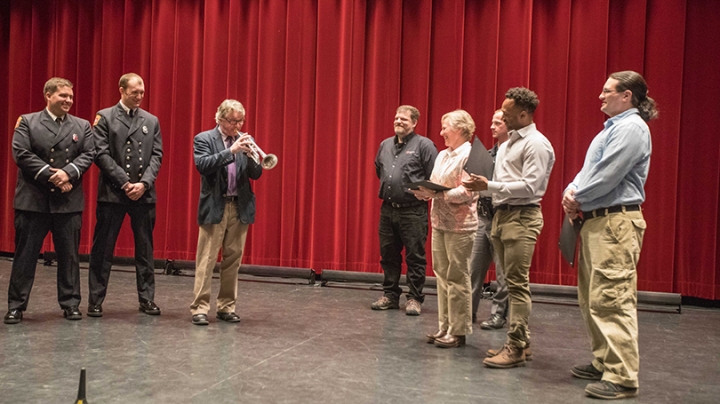 Glendon Ingalls plays When the Saints Go Marching In on his trumpet for the people who aided in his rescue after his heart stopped on March 3. (Photo by Robert Gill)
4/26/2017
Body

Trumpet player Glendon Ingalls says when his heart stopped and he collapsed during the sound check minutes before the March 3 opening of the 2017 Dartmouth Idol show, it was like winning the lottery.

The cast, crew, and orchestra were in their places in Spaulding Auditorium at the Hopkins Center for the Arts with a crowd of 900 ticketholders waiting outside when Ingalls suffered what his doctor later called “Sudden Death Syndrome.” Within seconds, the entire cast and crew reacted. There were several calls to 911, stagehands cleared the set, and fellow musicians lowered Ingalls to the ground while a core group of people began cardiopulmonary resuscitation (CPR).

“Kevin and I were looking for a pulse, he started turning a bit bluish-purple on us, and that’s when the AED arrived just in time,” says Graves. “I delivered the shock through the AED, it said, ‘shock delivered, commence CPR.’ He took these two deep breaths—kind of like a snore—and that's when he started to regain his color, and so we knew he was starting to come around.”

During a ceremony at the Hopkins Center for the Arts on Monday, musician Glendon Ingalls, left, meets Nate Graves ’13, one of the Dartmouth Idol cast members who helped save his life. (Photo by Robert Gill)

Ingalls showed his appreciation on Monday when he played a Dixieland riff of When the Saints Go Marching In for his rescuers during a ceremony in Spaulding arranged by the Hanover Fire Department and Dartmouth Hitchcock Medical Center to recognize Upper Valley residents who put CPR and AED training to work to save lives.

“I am incredibly lucky that these people were trained and ready to step in for me,” Ingalls says, adding that an EMT who heard his story advised him to “go buy a lottery ticket today.”

Because of the rapid response, Ingalls’ quality of life was not impaired. He was sitting up and could stand one day after the incident. He was out playing music within two weeks, and has performed in 22 concerts since getting out of the hospital. Everywhere he goes, he tells his story and talks about the importance of CPR and AED training.

“Because of what they did, I am still doing what I do, which is make music and teach music,” says Ingalls, a retired music teacher of 39 years who plays trumpet and stand-up bass in jazz trios, theater productions, and concerts throughout the region.

At the ceremony on Monday, physician Thomas Trimarco, emergency medical director for Dartmouth-Hitchcock Medical Center, said the chances of surviving a cardiac incident like Ingalls’ are less than 10 percent, and an even lower percentage of victims are revived fast enough to avoid some level of permanent brain damage. The hope is that by highlighting the heroic efforts of bystanders like the cast and crew at the Hopkins Center, emergency responders can get the word out about the importance of CPR training and improve those odds, Trimarco says.

Hanover fire captain Josh Merriam, one of the EMTs who responded to the emergency in Spaulding that night, presented citations to three of the four Dartmouth rescuers Monday. (Arora, who works for a health care startup in San Francisco, was not able to attend.) Merriam says when he arrived minutes after the initial 911 call, Ingalls’ heart was beating and he was breathing on his own.

“They did everything right,” Merriam says. He is also presenting a plaque to the Hopkins Center, which he hopes will hang beside the AED in the lobby to “remind people of what this training can do.”

Ayres says the Hopkins Center staff and crew go through CPR and emergency training every two years. Graves, who is in graduate school in New York pursuing a career in medicine, had CPR training through his high school years working as a lifeguard. And Arora had CPR training a year ago when he was a member of Hanover croo, the team of students who welcome the new Dartmouth class when they arrive for First Year Trips.

“It was phenomenal how everybody pulled together, everybody was calm, everybody was thinking straight. It was just a beautiful demonstration of what our team can do and what our students can do,” Ayres says.

“This was the best place for somebody to have a problem, because we’re all trained, and because we’re stage hands. We expect change. We don’t think about it, we just move,” Ayres said.

And the show did go on that night. Once the EMT crew stabilized Ingalls and transported him to the hospital, the crew snapped into action again. “We all looked at each other and said, ‘We have a show to do,’ ” Ayres said. They had 15 minutes to reassemble the stage and do a sound check for what was one of the most high-tech performances of the year and the 10th anniversary show of Dartmouth Idol.

Director Walt Cunningham gathered the company together after Ingalls was taken to the hospital, says Graves, who, with Arora, was among eight Idol alums who had returned for show.

“Walt wanted us to take a moment, pray, and send out energy to Glendon—then start the show,” Graves said.

Arora says the energy in the room was intense in the moments before the doors opened.

“It was a crazy experience being a small part of helping Glendon, hoping that he was going to be all right, then turning around and putting on what was a phenomenal show for the crowd—and for us as well. I think we all needed the music in that moment.”