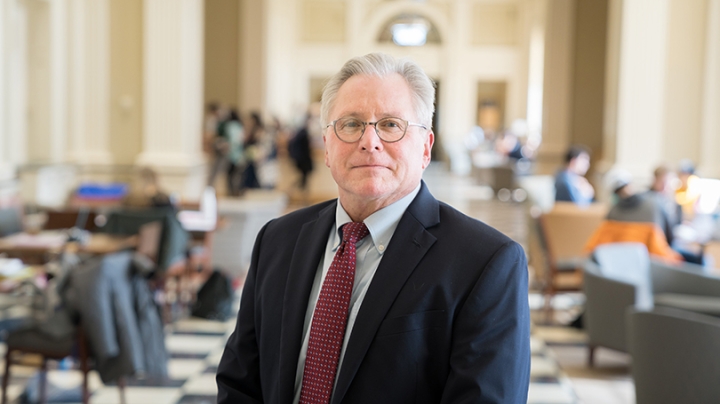 Harry Kinne has been Dartmouth’s director of safety and security and College proctor for 14 years. (Photo by Eli Burakian ’00)
4/06/2017
Body

As director for the past 14 years, Kinne has led the department that provides public safety and security services to the College community of about 10,000 students, faculty, and staff, and is responsible for the security of Dartmouth’s more than 100 buildings.

He will be greatly missed, says Mills. “The welfare of our community is always uppermost in Harry’s mind. He has worked tirelessly to support the health and safety of everyone at Dartmouth.”

Kinne says his primary goal has been to serve the Dartmouth community. Dartmouth’s security patrols collaborate closely with Hanover police and emergency responders, he says. “We interact with Norwich, Lebanon, Enfield, and Lyme. We have very good relationships with those departments and with federal agencies.”

Kinne was named Dartmouth’s safety and security director in 2003. In 2009-10, he served for nearly a year as interim associate dean of the College, continuing to supervise safety and security while also overseeing the Reserve Officer Training Corps (ROTC) program and the social events management committee.

Kinne’s retirement caps a 37-year career in public safety and facilities management in higher education. Before coming to Dartmouth, he was director of facilities operation at Wesleyan University, where he also served as director of public safety. He has also directed a criminal justice program at Nazareth College in Kalamazoo, Mich., where he served in the police department.

Kinne’s official title at Dartmouth includes a word rarely used these days: He is director of Safety and Security and College proctor.

“It was explained to me when I got here that ‘proctor’ goes back to English schools, where it meant ‘disciplinarian.’”

The archaism may not reflect his service-oriented approach, he says, but he did choose to put it on his badge as a nod to history. Kinne will turn in that badge on May 15.

“The best part of this job for me has been working with such a dedicated, hard-working staff,” he says, “and meeting so many interesting people. Every four years we have a whole new constituency coming in, and no day is ever boring.”

Associate Director of Safety and Security Keiselim Montás will serve as interim director as a national search for director is conducted.