Studying the Northern Lights by Rocket 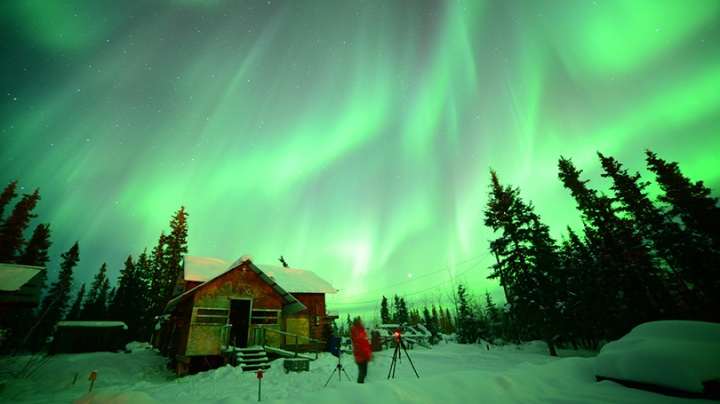 The northern lights dance in the sky over Venetie, Alaska. (Photo by Jason Ahrns)
4/12/2017
Body

The Aurora Borealis, which can fill the night sky with a shimmering light show, fascinates people with its beauty, but Professor of Physics and Astronomy Kristina Lynch looks beyond the aesthetics.

“The study of auroras is basic to our understanding of how our universe works and the nature of other planets in our solar system,” says Lynch, who studies the celestial displays.

Auroras, also known as the northern lights, are best viewed in the far North, so this is where Lynch does most of her work. Early on the morning of Feb. 22, she and her colleagues launched a NASA rocket into the dark Alaskan sky 225 miles above the Poker Flat Research Range near Fairbanks to take electromagnetic readings of the displays.

This was the first of two identical rockets they sent into two separate aurora events in the research program dubbed ISINGLASS, for “Ionospheric Structuring: In Situ and Ground-based Low Altitude StudieS.” A second launch took place on March 2. “When you do a rocket campaign, you are embedded in Alaska for weeks at a time,” says Lynch, “but you get to pick and choose which aurora to study.”

The ISINGLASS science mission is an outgrowth of a six-year technology development mission that Dartmouth conducted with the University of Alaska to build the sensors that make up the rockets’ small payloads. When the rockets reach the target altitude, they deploy their payloads of sensors throughout the auroras, taking multiple electromagnetic readings at various points along the trajectory.

The overall objective is to measure the locations and characteristics of the waves, wisps, and whorls in the Aurora Borealis. “Auroras appear in many shapes and sometimes an aurora is just a big glow,” says Lynch, who is intent on learning what accounts for the differences, what external forces are driving the aurora.

“The visible light produced in the atmosphere is the last step in a chain of processes connecting the solar wind to the atmosphere,” she says. “We are seeking to understand what the structure in these visible signatures can tell us about the electrodynamics of processes higher up.

“ISINGLASS was set up to come apart into a dispersed array of probes and record local spatial variations. All the measurements were taken at the same time, but at different places within the aurora.”

“We’ve had several senior thesis projects come out of our program,” says Lynch, whose Rocket Lab has one graduate student and several undergraduates currently working on projects related to ISINGLASS. “The development of this spacecraft started with a bunch of little store-bought cards that were turned into specialized boards, designed and built by our students.”

Lynch is an observationalist, she says. “My job is to observe and record the variations that are there and then provide these data to other scientists who can create a model that is consistent with these observations. The phase we have now moved into is taking the data from all the different measurements we have collected, and from the cameras and the radars, and stuffing this into a format our modeler can use.”

An understanding of Earth’s auroras can shed light on the other planets in our solar system. Jupiter, Saturn, and Uranus have auroras that can be seen from Earth, Lynch notes.

“If you understand how the aurora works, that tells you about that planet,” she says. “If there is an orderly aurora like we have with halos around the poles, it can tell you where the magnetic field is and something about its strength, as well as its interaction with the solar wind. The color of the light also tells you about the chemistry of the atmosphere.”

She says the other planets show spots of aurora under their moons, which may offer some insight about how the moon is disrupting the electrodynamic environment.

“An extraterrestrial aurora can serve as a remote probe but it only does that if you understand the processes underlying it,” she says. “We can’t go to Uranus and poke around in the lower ionosphere, but we can do it by measuring what we have here and extrapolating. This is what we are doing.”