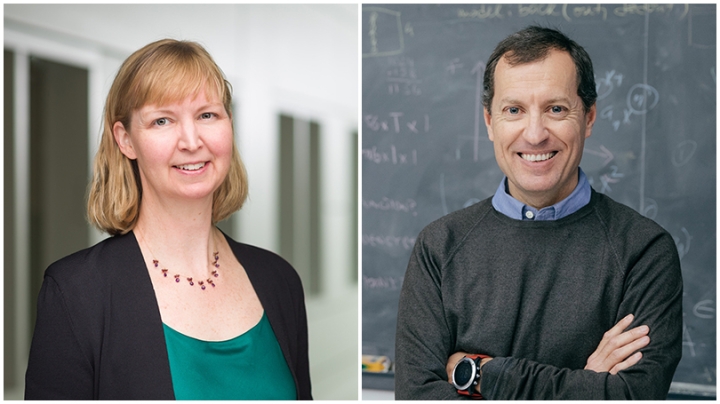 Dartmouth professors Louise Davies and Lorenzo Torresani have been named Fulbright Scholars for the 2017-2018 academic year, enabling their planned teaching and research activities abroad. Davies will head to Japan and England to focus on information sharing with patients, while Torresani is bound for Ghana, where he will teach the technology of machine learning and apply it to challenges in the local economy.

Louise Davies is an associate professor at the Geisel School of Medicine and The Dartmouth Institute for Health Policy and Clinical Practice. The Global Scholar Award that she received is specifically designed to support projects in two or three countries—Japan and England, in Davies’ case.

“My initial response was, what have I done?” Davies says. “I spent the first week peeling myself off the ceiling, the subsequent week trying to figure out what we were going to do for my family and work. Now it is beginning to get real and I am starting to get excited.”

Projects supported by a Global Scholar Award must benefit each of the countries to be included, as well as the United States, says Davies. “I am going to Japan for the months of September and October, to work at Kuma Hospital in the city of Kobe.”

The hospital in Kobe has been monitoring small thyroid cancers in patients for the past 20 years, cancers that were picked up incidentally. “Long-term safety data shows that it is safe to monitor small thyroid cancers that are in the right location in the glands, not near any vital structures. Even among the very small numbers that grow a little bit, you can still undergo surgery and remove the cancer effectively,” Davies says. “This is a practice that we would like to see people voluntarily adopt in the U.S., so this would be a good way for me to go and learn from them, to see for myself how the program works.”

Oxford University in England is her next stop. She will be there for March, April, and May of next year. “I will be learning advanced techniques and strategies for using what we call narrative data—patient experiences of illness chronicled with words rather than numbers,” Davies says. “For the last 15 years, the British have been interviewing 50 to 60 people who have all had a particular illness experience, analyzing the data, and creating publicly available summaries about what that experience is like.”

Her plan is to interview patients in Japan who have been part of the thyroid monitoring program, and then, following the Oxford example, use that data to create modules that might be available to the public, to inform their decisions regarding treatment.

“We are very good at counting things and very good at creating statistics to represent different outcomes that people can have after medical treatments,” she says. “However, we are not very good at summarizing and explaining to people what typical experiences of an illness may be. People have demonstrated on the internet that they want that and need that.”

Lorenzo Torresani, an associate professor of computer science, has won a Core Fulbright Scholar Program award. He will visit Ashesi University in Ghana during the 2017-18 academic year, working with the chair of the computer science department, Ayorkor Korsah ’01, Thayer ’03.

Torresani conducts research in deep learning, “a version of artificial intelligence (AI) involving the training of ‘deep’ models—models that can automatically extract rich hierarchical representations from lots and lots of data—big data,” he says.

When he won the Fulbright, Torresani had already planned a leave of absence for 18 months to work for Facebook in Menlo Park, Calif., a company that has provided funding for his Dartmouth research. He will leave in July to spend his first six months in California, the next six in Ghana, and then return to Facebook for his final six months.

“At Facebook, I will have a leading role in their research on automatic video understanding using AI and deep learning,” he says. “One of my former students, Du Tran, PhD ’16, joined Facebook last year. I look forward to working with him again.”

Automatic video understanding involves the design of computer systems that can recognize items present in an image, what action is being performed in a video, or what makes up the scenery.

“Facebook is particularly interested in this technology because it could enable them to recognize automatically what is present in your videos and your pictures. Targeted advertisement is a natural application of this technology,” Torresani says.

Turning to the African leg of his journey, Torresani says, “Ayorkor had returned to Dartmouth from Ghana a few years ago and gave a talk,” says Torresani. “I told her that I would like to spend some time in Africa and investigate potential applications of my research to help the local economy in a developing country like Ghana.” With the Fulbright, Torresani will get his wish.

“We have been discussing several projects, one of them is to leverage satellite images to automatically analyze conditions on the ground,” he says. “The system could provide recommendations to farmers about water, seed, or fertilizer for the purpose of increasing crop yield.”

Ashesi University will also benefit from Torresani’s time there. He specializes in machine learning—the technology that enables systems to learn without being explicitly programmed. In Ghana, he will be teaching the subject in what he regards as one of the most in-demand classes in computer science.

“Several faculty there will audit the class so that they can learn to teach the material in future years,” he says. “This will be a way for them to essentially absorb a new class into their curriculum.”