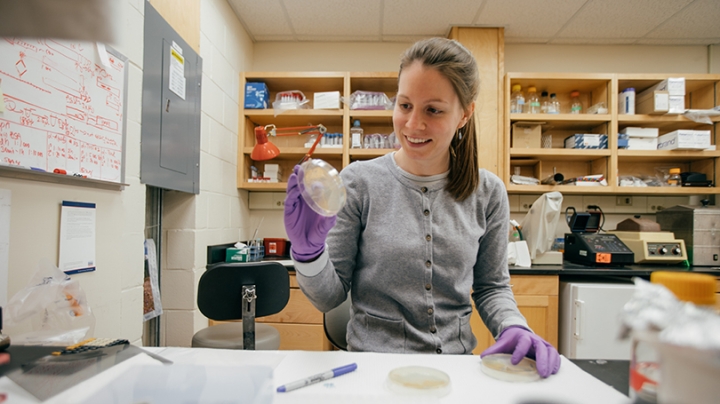 Anne Woodbrey, a doctoral student, is the linchpin connecting three Dartmouth laboratories that are collaborating on a treatment for cholera—an acute diarrheal disease that can kill within hours if not treated. A recent cholera outbreak in war-torn Yemen left nearly 200 dead.

The Centers for Disease Control and Prevention (CDC) reports that 3 to 5 million cases and more than 100,000 deaths each year are caused by the bacterial infection, primarily attributed to contaminated water or food. Diarrhea from cholera and other diseases is the single biggest cause of death in children worldwide. The CDC says that cholera vaccines exist, but their availability is limited and “no cholera vaccine is 100 percent protective.”

Woodbrey is a PhD student of Gordon Gribble, the Dartmouth Professor of Chemistry, and F. Jon Kull ’88, the Rodgers Professor of Chemistry and dean of the School of Graduate and Advanced Studies. She first entered the cholera arena as an undergraduate at Plymouth State University through the Idea Network for Biomedical Research Excellence (INBRE) program.

“The program brought me to Dartmouth, where I did research with a graduate student in Jon Kull’s lab,” she says. His lab, which investigates how proteins work at the molecular level, is one of Woodbrey’s three collaborating groups.

The second is the laboratory of the late Ronald Taylor, a professor of microbiology and immunology at the Geisel School of Medicine. Taylor was also the director of the New Hampshire INBRE, the program that led Woodbrey to Dartmouth. The third is Gribble’s laboratory. He has spent his career devoted to organic chemistry and the synthesis of biologically active products.

Woodbrey is first author of a paper published in March in the online Nature journal Scientific Reports. It details the cholera research of the collaborating laboratories as they have sought a means to control the disease.

In the face of increased antibiotic resistance in some disease-causing bacteria, Dartmouth researchers charted a new path to combat the disease. Their approach is to develop drugs that are anti-virulent. “Virulence refers to an organism’s ability to cause disease,” says Woodbrey. “By developing anti-virulent drugs, we are not killing the bacteria. We are preventing them from making us sick.”

The collaborative campaign against the disease began with an analysis of a protein called ToxT. “ToxT is a protein specific to the bacterium Vibrio cholerae. It is directly responsible for turning on the bacterial genes that lead to cholera, an intestinal, diarrheal disease,” she says.

Taylor, who was a bacterial geneticist and expert on cholera, was a leader in the field of pathogenesis—the development of diseases. He reached out to biochemist Kull, whose laboratory investigates protein structure and function using a technique known as X-ray crystallography.

Kull and his group determined the structure of the ToxT protein and, bound inside a molecular pocket, they found a fatty acid. “Its presence hinted at it being the natural inhibitor of the protein,” says Woodbrey. “It is not a permanent part of the protein. It can bind to the protein, and unbind. In its bound state, it inactivates the ToxT.”

They took their find to Gribble and asked him to help in making a more effective inhibitor. Gribble and Evans Onyango, a postdoctoral researcher in Gribble’s lab and second author of the Scientific Reports paper, developed the procedure for making the compounds.

“Using the folded structure of the monounsaturated fatty acid observed in the X-ray structure of ToxT as a template, we designed 10 novel compounds that inhibit the virulence cascade to a greater degree than any known inhibitor,” writes Woodbrey and her coauthors. “Our findings provide a structural and functional basis for the development of viable anti-virulence therapeutics that combat cholera and, potentially, other forms of bacterial disease.

“These are novel compounds that we have designed to target ToxT. We have created more specific and more potent inhibitors for this bacterial protein,” she says.

Woodbrey synthesized the compounds, tested them for their ability to inhibit virulence in Vibrio cholerae, and determined the structure of them bound to ToxT. She says it is a challenge to work in all three laboratories, but rewarding.

“I split my time between the organic lab, the biochemistry lab, and the microbiology lab,” she says. “I get to do a little bit of everything, and with the support of Evans and microbiologist Gabriela Kovacikova, another author on the paper, and other members of the labs, this project has really taken off.”

Though an FDA-approved drug may still be years down the road, Woodbrey says the potential now exists for reducing the virulence of cholera.

“The threat of a cholera outbreak is increased after natural disasters, such as an earthquake or hurricane. It is prevalent in refugee camps. Even military or aid workers are susceptible when they are going to a place where there is potentially contaminated water or no access to clean water. We could give these drugs as prophylactics, preventing any sort of symptoms that might occur.”