The student linguists planned their itinerary and learned a bit of Tongan. 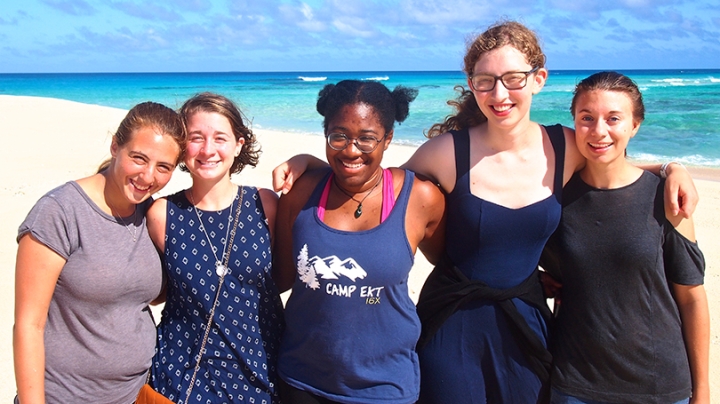 Danielle Kroll ’18, Drusilla Falco ’18, Anissa Gladney ’18, Shirley Gabber ’18, and Emma Rieb ’18 gather on a beach beside the Matafonua Lodge on the Tongan island of Foa, where they spent a week studying the Tongan language during a foreign study trip they planned. (Photo courtesy of Emma Rieb)
5/26/2017
Body

When linguists head into remote areas to study indigenous languages, they often face steep logistical hurdles: where to stay, what to eat (and what to avoid), how to find local speakers (known to linguists as “language consultants”), and how to reach them, all within a fixed budget and time frame.

At Dartmouth, that kind of planning for a foreign study program (FSP) is usually done by faculty, with support from the Frank J. Guarini Institute for International Education. But last winter, Lindsay Whaley, a professor of classics and linguistics who led an FSP in Auckland, New Zealand, launched an experiment. He added a side trip, to Tonga, and he asked five student travelers—Danielle Kroll ’18, Drusilla Falco ’18, Anissa Gladney ’18, Shirley Gabber ’18, and Emma Rieb ’18—to take full responsibility for preparations. “We wanted them to experience for themselves the challenges of managing a field trip, because in the real world, that’s a crucial part of what linguists have to do,” Whaley says.

The last remaining monarchy in the Pacific, Tonga is an ideal laboratory for linguists, says Whaley. “It’s an archipelago that has never really been colonized, and Tongan is still spoken there.” Most Tongans also speak English, which makes communication fairly easy. But that’s also why the native language needs to be studied and documented before it disappears from everyday speech, Whaley says. “English is encroaching, and we don’t know what is going to happen there 50, 100 years from now. So our aim is to get involved in the language, maybe working with a local school, helping to archive local histories.”

Whaley wanted to involve students in the Tonga project from the get-go, designing their own field trips. He doesn’t know of any other college or university international education program that gives undergraduate students so much responsibility for travel and research planning. “I’m pretty sure Dartmouth is the first Ivy League school to try something like this,” he says.

While still in Auckland, the students learned some Tongan, and in preparation for their trip, tried to set up meetings in advance with local speakers on one of the small Tongan islands. “That was a big challenge,” says Anissa Gladney ’18. “Our cell phones couldn’t make calls from Auckland to Tonga, so we had to kind of fly by the seat of our pants until we got there.”

From some Tongans who worked at their Auckland hotel, the students learned about a weaving group of local speakers. But that meeting spot wasn’t easy to find, and the terrain was tricky to navigate on their only mode of transportation—bicycles.

“We’d get vague directions to the group, like, ‘Go down a hill. Then go up a hill. They’ll be somewhere on the left,’” Gladney recalls. One of the bikes lost its chain, but they repaired it and forged ahead in search of the weaving group. “We rode out to where we thought they were and sure enough, there were some ladies sitting in a room, and we just went up to them and said ‘hi.’”

“The students did well from that point on,” says Whaley, “hearing and transcribing the language and starting to analyze it. It’s exciting for us because our profile as a department is understudied languages. All of us do field work, so this is a natural extension, giving our students a taste of what our lives are like.”

As it turned out, the travelers arrived in Tonga during a historic time.

“We were there when the queen mother passed away,” says Kroll. “There was a 10-day mandatory mourning period. People wore black, the dance clubs and bars were closed, and there was black and purple bunting everywhere.”

The Tongan language is impossible to master in only a week, even for trained linguists, but the students say a few vocabulary words came in handy. “The most important thing for us to say was osi mali,” says Gladney.

It means “I’m already married,” and it helped the Dartmouth women fend off a few ad hoc marriage proposals from Tongan men they encountered.

That useful phrase is one tip they’ll pass along to the next group of students who design a Tonga trip, next winter.  But they won’t hand over a complete tour guide for the FSP week, because that would make things too easy.

“We all take a field-methods class, but actually being on the ground—that’s a lot more challenging,” says Kroll. “Right, we now know a lot more than we did at the start of the trip, and we’ll point the next group in a general direction. But we don’t want to figure everything out for them. That would take away the learning they want to do.”

Plans are already underway for the winter Tonga trip, which is supported by the Experiential Learning Initiative overseen by the Dartmouth Center for the Advancement of Learning (DCAL). “My colleague Laura McPherson will be taking six students,” says Whaley. “Amazingly, one of them has connections with well-situated people there, so that group may be able to establish linkage for us in a documentation or archiving project. They may also get a chance to visit the royal palace, which is generally not open to the public.”