The two faculty members will spend a year in residence at Harvard’s Radcliffe Institute. 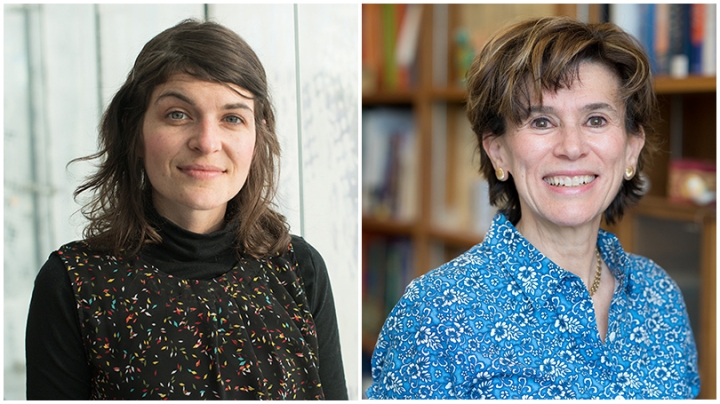 Jodie Mack, left, is an associate professor of film and media studies and Jane Lipson is the Albert W. Smith Professor of Chemistry. (Photo by Eli Burakian ’00)
5/22/2017
Body

Professors Jane Lipson and Jodie Mack have been selected as Radcliffe Institute Fellows, joining more than 50 women and men in the 2017–2018 fellowship class pursuing work across the arts, humanities, sciences, and social sciences.

They will spend the academic year at Harvard’s Institute for Advanced Studies, also known as the Radcliffe Institute, where Lipson will be studying organization in certain biological systems. Mack will be working on a feature film she describes as a “musical documentary travelogue.”

At the Radcliffe Institute, Lipson will be using theory to study ways in which some kinds of biological systems can develop locally separated and structured regions that become important to their function. “This process shares interesting features with what happens in complex synthetic mixtures, an area in which I work,” she says.

“My first scientific goal this year is to learn enough biology to map the intense complexity of these systems into a set of problems that I can tackle,” Lipson says. “However, what excites me the most is the prospect of engaging on a daily basis, all year long with an intellectual community of rare breadth and accomplishment.”

Mack, an associate professor of film and media studies, is both a Film Study Center Fellow and the Roberta and David Logie Fellow at the Radcliffe Institute. “It is a thrill to know that two separate entities and disciplines—film and textile arts—have come together to support my project,” Mack says.

At the institute, Mack will compose and edit music for her feature-length animated film, The Grand Bizarre, which she describes as “a journey through the graphic motifs of textiles paired with figures and landscapes to explore the technological development of fabric production and consumption alongside systems of visual and spoken language.

“In the midst of the most ambitious project of my career to date, I welcome the opportunity for uninterrupted time, surrounded by an incredible and stimulating community, to work on my film,” says Mack. “I have a long list of visual and sonic tasks to accomplish, and to work on this film within facilities that have incubated a long list of amazing films is an honor.”