The sophomore presented a paper for an English class at a scholarly conference. 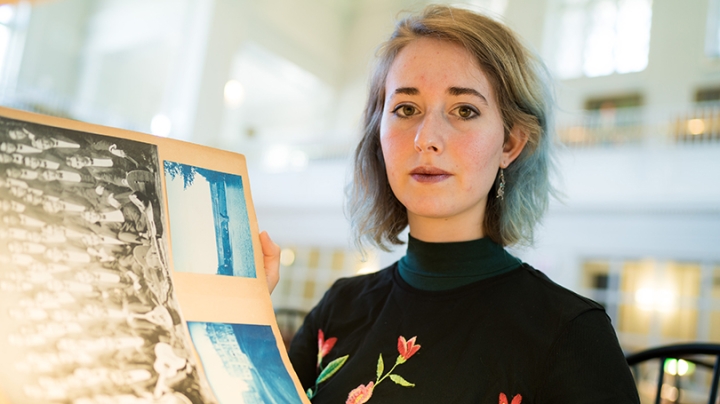 “We’re leaving trails online, but it’s so much less tangible than being able to hold this stuff that belonged to somebody in 1906,” says Kendall Christensen ’19. (Photo by Eli Burakian ’00)
5/31/2017
Body

What began as an ordinary assignment for an English class became an opportunity for Kendall Christensen ’19 to showcase her research on a bigger stage.

Christensen, who plans a major in English with a concentration in creative writing, had the chance to present her paper—originally written for Professor Colleen Boggs’ “American Prose” class last fall—at the annual conference of the Ephemera Society of America in Old Greenwich, Conn., in April.

Her subject, an analysis of one of the many early 20th-century Dartmouth student scrapbooks, or “mem books,” collected in Rauner Special Collections Library, was a good fit for a gathering of scholars and collectors dedicated to studying ephemera, that is, historical objects of material culture—like postcards and newspaper advertisements—not originally intended to be preserved.

“It’s made me take my research more seriously,” says Christensen of the experience. Before, she says, she saw research “as practice, an assignment I have to do to participate in class. But now I’m starting to see it as something that is actually relevant. If I pick the right topic and it’s something that I care about, there are people interested in the same sorts of things who want to hear me talk about it.”

Boggs frequently brings students to Rauner to examine first editions and other artifacts, including the mem book collection. And she encourages students to find ways to share their research with broader audiences, including writing posts for Rauner’s blog.

“One of my hopes is to continue public engagement with the humanities,” Boggs says. “These opportunities for students to present their research are wonderful ways for them to communicate their interest in the humanities beyond the classroom.”

Boggs says Christensen “wrote a really rich paper” about the mem book of Harold Rugg, a member of the Class of 1906 who went on to become a librarian at Dartmouth. Christensen’s paper, “Men in Dresses, Athletic Heroism, and Aesthetic Presentation: Performance in the Dartmouth Narrative,” examined Rugg’s representations of masculinity in what was then an exclusively male society.

“I noticed a lot of compositional juxtaposition in his mem book, where he would show students in costume performing for the stage, and a lot of the time it was pictures of men in dresses, because men had to play female roles as well as male roles,” Christensen says. “And that would be right next to pictures of men in sports uniform, which in that context became apparent as another type of costume. So that led me to think about performance in Dartmouth student life, and how students performed gender and athleticism and scholarship.”

The mem book of Harold Rugg, a member of the Class of 1906 who went on to become a librarian at Dartmouth, is part of the collection of early 20th-century Dartmouth student scrapbooks at Rauner Special Collections Library. (Photo by Eli Burakian ’00)

Mem books were a popular pastime among the Dartmouth students of the era, says Jay Satterfield, the special collections librarian at Rauner. Students would purchase an empty book at the beginning of their freshman year and fill it with dance cards, memorabilia of sporting events and fraternity membership, ticket stubs, even chars from the bonfire, documenting their four years in Hanover.

Richard Sheaff ’66, a member of executive committee of the Friends of Dartmouth College Library and the vice president of the Ephemera Society, encouraged Satterfield to spread the word among faculty that the conference was looking for presentation proposals from students, and offering a year’s membership in the society for students whose papers were accepted.

When Christensen received a message from Boggs suggesting that she submit her paper, she had just suffered a rock climbing accident that led her to take the winter term off (she is now fully recovered). “I was really excited about it,” she says. “Professor Boggs came to visit me at Dick’s House before I went home, and we talked about preparing for the conference. Luckily I was well enough to go to the conference by the time it came around.”

Having the project to focus on kept her engaged during her off term, she says. “I was able to still feel like I was working on something even though I wasn’t in school. It was the first conference I’ve ever presented at in any way. So I was nervous, but very excited to feel like I was doing something beyond the classroom, applying what I had learned to something real.”

The most valuable—and the most daunting—part of presenting, says Christensen, was fielding questions from an expert audience about everything from traditional costumes in turn-of-the-century Shakespeare plays to the paper Rugg’s photographs were printed on.

“Unlike presenting in a classroom setting, you’re presenting for people who specialize in what you’re talking about. So a lot of the time they’ll be able to give you feedback on your project or show you things that you didn’t consider,” Christensen says.

“That experience of having a really different kind of question asked of a project can be clarifying,” says Boggs, who helped Christensen prepare for the types of feedback she might expect at a scholarly conference. “Sometimes you get a question and you don’t know why someone is asking it, and you have to think on the spot. If you can’t answer it, you admit that, and see if you can connect to it differently. I think of questions as gifts of engagement.”

Earlier this month, Christensen had a chance to reprise her Emphera Society presentation for a gathering of the Friends of the Library, students, faculty, and alumni in the new periodicals room in Baker-Berry.

Introducing the talk, Sheaff remarked that conference attendees had been “hugely impressed” by the quality of Christensen’s presentation. And in the question-and-answer period, the audience in the library seemed equally engaged, particularly about how Rugg’s representation of student life compared with student life today, and who he considered the primary audience for his mem book.

“I’m thinking about if 100 years from now a Dartmouth student will look through our Instagram feeds looking at public production of memory,” one student commented.

“One thing that made me kind of sad in doing this project is we don’t leave the same paper trail that was left before,” Christensen replied. “We’re leaving trails online, but it’s so much less tangible than being able to hold this stuff that belonged to somebody in 1906. So I’ve started collecting a lot more. I keep my receipts.”

Christensen’s presentation to the Ephemera Society was supported by funding from the Department of English, the Office of the Associate Dean for Arts and Humanities, and the Leslie Center for the Humanities.