Memorial Service for Joshua Levi Monette ’19 on May 8

A linguist and member of the Makah tribe, Monette had hoped to help save its language. 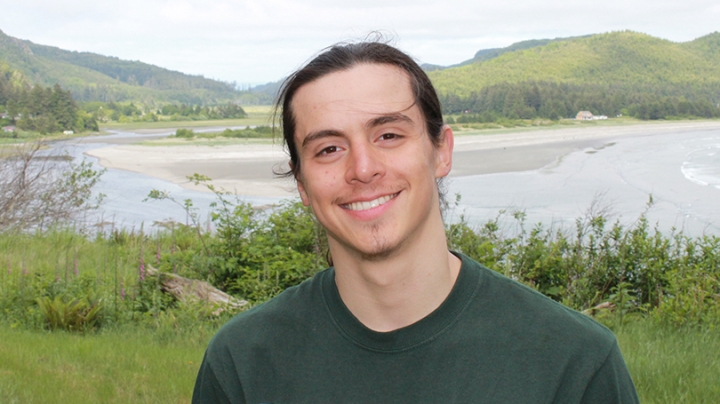 A ceremony honoring the memory of Joshua L. Monette ’19 will be held in Rollins Chapel on Monday, May 8, at 5 p.m. (Photo courtesy of Rebekah Greene-Monette)
5/03/2017
Body

The Dartmouth community will honor the memory of Joshua L. Monette ’19 with a ceremony in Rollins Chapel on May 8. Monette was swept into the ocean on April 2 while gathering seafood at Cape Flattery near his home in Neah Bay, Wash.

“I am one of eight children,” says Greene-Monette. “My dad has 100 grandchildren and great-grandchildren. Josh loved being part of all that. He had so much love in his heart, and he was a great communicator. He did not take this place or our culture for granted.”

Greene-Monette, who works at the Makah Museum in Neah Bay, says her son fully embraced his native heritage. “In the eighth grade he started taking Makah language classes. He was a sponge for information,” she says.

Monette leaves behind three siblings: an older brother and two younger sisters. “He loved to sing with his four-year-old sister,” his mother recalls, “and before he became a singer he participated in tribal dancing. Our museum was part of an American Indian exhibit at the Smithsonian Institution in Washington, D.C., and Josh performed for the opening there and also in New York City.”

She says her son also enjoyed all kinds of sports, including unicycling, soapbox derby racing, baseball, running, and football. And he spent a lot of time exploring the rugged Northwest coastline. “When you look on the map at where we live—we are out on the edge of the world here,” his mother says. “He literally fell off the edge of the world.”

While still in high school, Monette competed with adults to get a job at the Makah Fisheries Program, where he surveyed and researched marine mammals. “One of his hobbies was finding carcasses on the beach, and taking them apart so he could use body parts to make rope or tools in the traditional way,” his mother says. Monette was also an unusually young Makah Tribal Council delegate to special events, meetings, and ceremonies.

Although her son was naturally gifted in science and math, Greene-Monette says he chose what was, for him, a more challenging major at Dartmouth—linguistics—so he could learn more about the structure of languages, especially Makah. “To him, Dartmouth meant opportunity,” she says. “He knew he wanted to go to a good school long before he enrolled.” Monette planned to put his Dartmouth education to practical use. “His idea was to return Makah to spoken fluency by opening an immersion school for kindergarten through grade three, back here in Neah Bay,” says his mother.

At Dartmouth, students remember how easily Monette made friends, and how much he cared about them.

Justeen Komok ’19, from Bainbridge Island, Wash., met Monette at Dartmouth’s pre-orientation for Native American students. “He was kind and warm, and we had an instant connection,” Komok says. “It makes my heart ache thinking that he’s gone, because he was my piece of home. Such a calming presence, and so sweet.”

Josephine Kalshoven ’19 remembers the day she and Monette spontaneously formed what they called a “hallway crew” during orientation. “When students came by, we just called out, hey, how are you? And soon there was a whole group of people who suddenly knew each other. Josh was so welcoming.”

Alexandria Hawley ’19 felt welcomed when she dropped into a midnight breakfast before exams in the Native American house. She says she didn’t know anybody, and Monette made her feel instantly at home.

Darshina Yazzie ’19 had a similar experience, sitting outside by herself one night at Moosilauke Ravine Lodge after first-year trips. “I’m shy,” she says, “but after Josh introduced himself that night, we became such good friends. My tribe is Navajo, from rural Arizona, and we would talk for hours about our communities and our cultures. When he said he wanted to save his language, I said that was taking on a lot, but he just said, ‘I have hope.’ ”

That hope seems to have been present from an early age. Greene-Monette recently found a diary her son kept as a young boy. One bittersweet entry lays out his long-range plans.

“I will do great things for my people and all native people alike,” Monette wrote. “I will greatly influence the people around me in a positive way. I will dream and dream big. I will live my dreams. I will strive to humble myself, and above all else I shall follow the Lord.”

He did all that, his mother notes, by the time he died at 19. But other plans for the future were cut short.

“I will build a house,” the diarist vowed.

“He’s had the architecture of a home in his head since he was eight,” his mother explains.

Monette is survived by his mother, father, stepfather, brother and sisters, a nephew, grandmother, grandfather, cousins, aunts, and uncles. More than 800 people attended a celebration of his life in his hometown on April 9. Several of Monette’s family members will travel to Hanover for the College memorial service, which begins in Rollins Chapel at 5 p.m. Monday and will be followed by a reception at Top of the Hop.