Native American dancing, drumming and authentic foods will grace the Green on May 13 and 14. 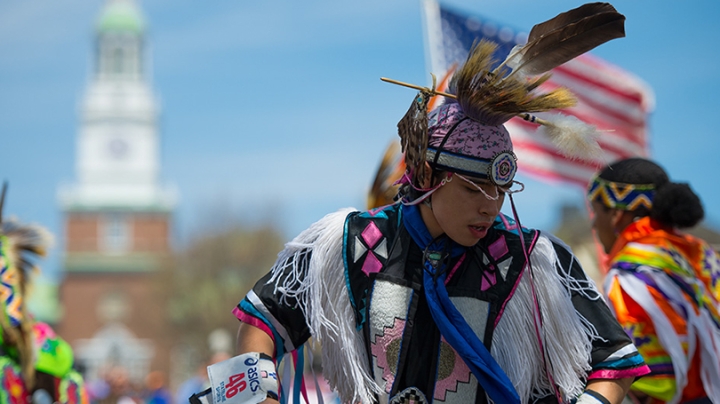 Dartmouth’s 45th annual powwow is expected to draw a lively crowd to the College this weekend, as traditional dancers, drummers, craftspeople, and food vendors gather from all over the country to celebrate Native American culture.

The event, which is open to the public, brings colorful regalia, drumming, dancing, crafts, and authentically prepared Native American foods to the Green.

Corinne Kasper ’17 says her relatives will be traveling to Hanover from northern Michigan, and cooking fried bread—a family recipe using flour, sugar, salt, baking powder, and milk. For Kasper, it’s a taste of home. “I actually have a tattoo of the words ‘fried bread’ in my grandmother’s Potawatomi handwriting on my back,” Kasper says.

The powwow is organized by a student committee of the Native American Program, whose co-chairs this year are Shelbi Fitzpatrick ’19 and Anna Reed ’19. Thirteen students are managing the fundraising, vending, logistics, staffing, and advertising.

At the start of each day’s celebration, many tribal communities participate in the blessing of the grounds, the grand entry, and the intertribal dance. Fitzpatrick, from Browning, Mont., is Amskapi Pikuni—one of 75 different tribal nations and communities represented by current Dartmouth students. “I think our powwow is special because of that diversity,” she says.

It’s also special this year, says Fitzpatrick, because Native American foods will be offered at the Class of 1953 Commons for dinner on Friday. And, for the first time at Dartmouth, a Head Person will join the Head Man and Woman in leading important dances. The aim, organizers say, is to support gender inclusivity. “Sherente Harris, the Head Person, will play a crucial role, leading a ‘Complete-the-Circle’ event for two-spirited dancers on Saturday at 4:30 p.m.,” says Fitzpatrick.

With over 1,000 people expected to attend this year, Dartmouth’s powwow has grown in popularity since the early years at Storrs Pond, says John Moody ’77, an ethnohistorian whose wife is a member of the Abenaki tribe. A founder of the Winter Center for Indigenous Traditions, based in Sharon, Vt., Moody says he’s gone to almost every powwow at the College since 1975. At a time of rapid social and political change, Moody appreciates the chance to observe or participate in arts and rituals that reinforce cultural identities.

“It’s a community gathering of considerable antiquity,” says Moody. “The local community, whether they are Native or not, really feel a deep kinship with this aspect of life in the Upper Valley. The faculty and staff in Native American studies also participate. So it’s an interlocking community of people who find a way to come together.”

Dartmouth’s powwow is sponsored by Native Americans at Dartmouth, the President’s Office, the Native American Program, and the special programs and events committee of the Collis Center for Student Involvement. The rain location is the Leede Arena. 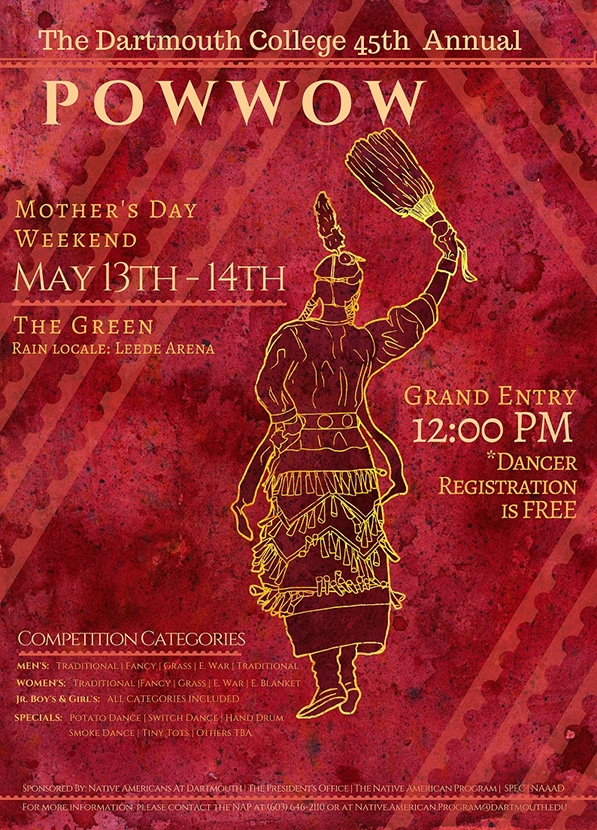