“I know I want to commit my life to service and justice,” says Muir. 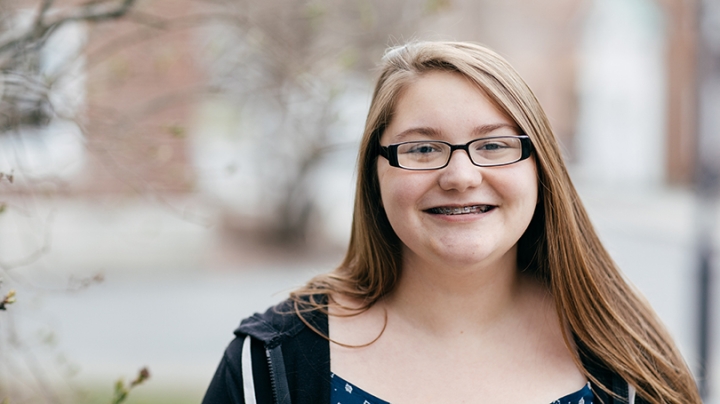 As a teenager in foster care, Rachel Muir ’20 says, attending a selective college like Dartmouth was beyond her wildest dreams. But she is doing well in her first year at the College, and gaining national recognition for her community service.

Muir has been awarded a 2017 Newman Civic Fellowship by Campus Compact, a coalition of colleges and universities that promote civic engagement. Named for Campus Compact founder and education reformer Frank Newman, the fellowship provides training and resources that help students develop strategies to achieve social change.

Muir first came to Hanover in 2013, when she was still attending high school in Schenectady, N.Y., to participate in Summer Enrichment at Dartmouth. SEAD is a four-year program that brings students from under-resourced backgrounds to campus to be mentored by Dartmouth students, taught by professors, and given a chance to develop leadership abilities.

Jay Davis, director of Dartmouth’s First Year Student Enrichment Program (FYSEP), directed SEAD when Muir attended the program, and has followed her progress as a first-year student at Dartmouth. He says she’s balancing rigorous academics with service to her College community.

“I first met Rachel when she was a 15-year-old applicant to our college access program. She has been one of the most impressive young people I have had the chance to work with over a 25-year career,” says Davis, who will mentor Muir for her Newman Fellowship. “She combines a fierce commitment to social justice with a consistently compassionate approach to those around her.”

Muir’s interest in helping others comes, in part, from personal experience. Her mother struggled with addiction. Muir says the family lived in poverty, and they were often hungry. Muir was placed in foster care at the age of 13; she was adopted two years later into a stable household.

“I think there’s a lot of understanding that comes with all that,” Muir says. “When I was younger I was really angry at everything that happened in my youth. But as time went on, I realized that although the things that happened to me were not justified, there were reasons behind them. My biological mother has had a difficult life, and there were no resources for her to launch herself out of poverty as a single mother of one disabled child and myself.”

At Dartmouth, Muir has been campus ambassador for the Office of Pluralism and Leadership (OPAL), working to increase diversity and inclusion on campus. She has spoken at training sessions for SEAD counselors. And she’s become involved in the Dartmouth Action Collective (DAC), a student group that promotes dialogue across typically divisive lines of privilege, gender, race, and culture. “Members of the collective who may have not experienced injustice and oppression can use our workshops to learn about life on the margins of society, so less privileged peers do not have to do all that educating on their own,” she says.

Muir says her first year at Dartmouth has been filled with good surprises.

“Before coming here I didn’t know people like me—people who have experienced poverty—could exist in spaces like this. But my best friend here also spent time in foster care. Seeing people from those backgrounds do well here inspires me and makes me want to do better, because I can see that they are accomplishing so many great things.”

Muir says the yearlong Newman Fellowship will allow her to attend workshops and webinars where she can meet other students and faculty who share a common goal: to engage in College-based service activities while working toward social change beyond their campuses.

When she first heard she had received the honor, she didn’t quite believe it.

“I had just come back from Dick’s House after being sick, and I got an email that said, ‘Congratulations,’ from the Center for Service. Honestly, I thought maybe it was some kind of mistake, but when I returned the email I found it was a real thing. It came out of the blue, and it’s great.”

A government major, Muir is considering a career in education policy. As a SEAD graduate, she says she knows how important it is to provide an on-ramp to higher education for students who might not consider applying to selective colleges without encouragement and financial assistance.

“I’m not exactly sure what I will do with my Dartmouth degree. But I know I want to commit my life to service and justice,” she says.