“This is what I want to do for the rest of my life,” says Corinne Kasper ’17. 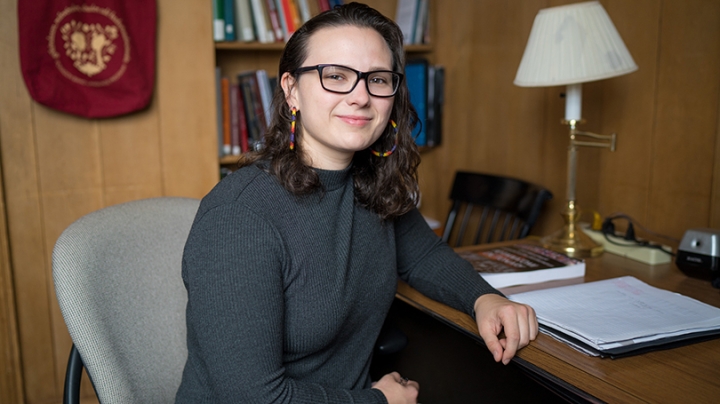 Corinne Kasper ’17, a senior fellow and recipient of a Mellon Mays Fellowship, is creating teaching tools to help others learn her native language, Potawatomi. (Photo by Eli Burakian ’00)
5/30/2017
Body

Corinne Kasper ’17, who belongs to the Pokagon Band of the Potawatomi tribe in southwestern Michigan, has been studying her native language since she was 13 years old. But fluent speakers and teachers of Potawatomi have been dwindling as English has become dominant. Kasper, a linguistics major, is developing teaching tools to help people learn or re-learn an endangered language that she sees as a cornerstone of her culture.

“This is what I want to do for the rest of my life,” says Kasper, who holds a Mellon Mays Fellowship. She’s one of five senior fellows who, recognized for academic excellence, are freed from classes in their final year to concentrate on a single project. The projects conducted by the senior fellows are funded by the Kaminsky Family Fund. Gerry Kaminsky ’61, who established the fund, was himself a senior fellow at Dartmouth.

For her thesis, Kasper is studying three similar languages: Potawatomi, Ojibwe, and Odawa. She’s doing something she says has not been done before: making a study guide about the formation and function of verbs. Potawatomi’s verb system is difficult for language learners to master, and she wants to make it easier.

“People get really tripped up on verbs,” says Kasper, “and I started thinking that I could create a kind of grid or flow chart that would map out that part of the grammar.”

Kasper sees her senior project not only as an academic challenge, but a contribution to her culture. She says her grandparents belong to a generation of Native Americans who were forced to attend boarding schools where they were required to speak English. “A big part of sovereignty is land, language, and culture,” notes Kasper. Despite challenges that were posed by colonization, Kasper says the Potawatomi culture is very much alive, and her work is part of a growing effort to help people speak and write the language.

“My uncle teaches Potawatomi, and I have learned a lot from him,” says Kasper. “He talks to fluent speakers and records their speech. But there is no set or structured curriculum in the classes I have taken. You just ask someone, ‘How do you say this?’ Or the teacher just says, ‘OK, today we are going to talk about complex sentences with three verbs and you are going to listen and learn it.’”

About her senior project, Kasper says she is “not trying to validate Potawatomi language and epistemology within a western academic framework.” Rather, she’s doing this work for her people, developing a teaching tool that will make her native language easier to learn.

“She’s taking a radical approach,” says McPherson. “In other Algonquian languages, there was a whole generation of children that couldn’t learn the language. So they just changed it, so that it makes more sense, so that it’s more transparent. Corinne’s saying, why don’t we do something similar with Potawatomi?”

Kasper says the best way to save an endangered language is to make sure young people learn it, even if it’s not spoken in their homes. “There are other people who care about this, and they have cared about it for years and years, so I think our language will survive,” she says. And her family is cheering her on. “None of my grandparents went to college, but my family is so smart. They’re brilliant,” she says. “They were all in the top of their class in high school, but money for college was always an issue.”

When she first got to Dartmouth, Kasper says, she wasn’t sure how to use her education to benefit her tribe. Now she’s decided linguistics will be a lifelong pursuit.

“Hearing people create their own sentences, thinking in Potawatomi, not just repeating sentences you have learned, that’s really cool, and a testament to the powers of revitalization and the importance of re-indigenization, or decolonization—or whatever you choose to call it,” Kasper says.

“The dream of all dreams would be to be a professor at the University of Notre Dame, because it’s close to home,” she adds. “I want to set up immersion programs and have kids speaking in Potawatomi as they grow up. It would be just an amazing thing.”