Studying Diplomacy Is Not Just Academic at the Dickey Center

Johnnie Carson, a former U.S. diplomat for Africa, is a visiting scholar at Dartmouth. 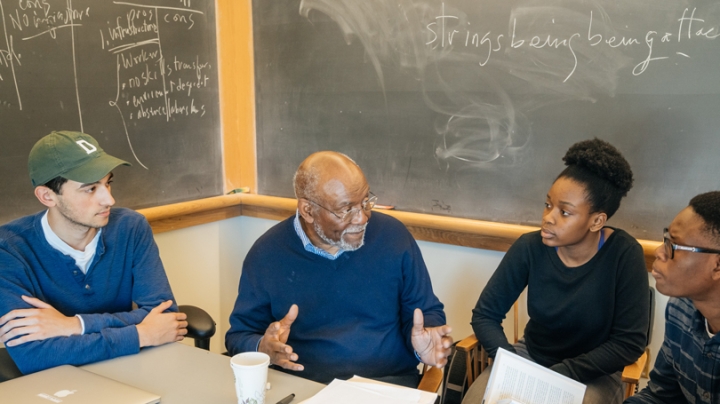 Students taking the seminar “U.S. Policy in Africa and the Great Challenges Africa Faces in the Future” knew they would be studying various aspects of recent politics on the continent. What they quickly discovered was that the scholar guiding their studies had firsthand experience with a good part of modern African political history.

The 37-year foreign service career of Ambassador Johnnie Carson, the Allen Bildner Distinguished Fellow in International Affairs in residence at the John Sloan Dickey Center for International Understanding, includes service as assistant secretary of state for the Bureau of African Affairs, and ambassadorships or Foreign Service postings in Kenya, Zimbabwe, Uganda, Botswana, Mozambique, and Nigeria. By the time he retired from government service in 2013, Carson had worked under a long line of secretaries of state, including Cyrus Vance, Madeleine Albright, and Hillary Clinton.

“We’re learning so much because everything that he’s teaching is his lived experience, and that’s something that you can’t get from just reading an article,” says government major Janice Fidalgo ’18. “In this class I’ve had experiences that I don't have in other classes, just because of who he is and what he’s done.”

As assistant secretary of state, Carson was Hillary Clinton’s chief adviser on African affairs. At the time, he worked closely with Daniel Benjamin, the Norman E. McCulloch Jr. Director of the John Sloan Dickey Center for International Understanding, who was then Clinton’s coordinator for counterterrorism. It was that connection that brought Carson to Dartmouth, he says.

“Dan lured me here,” says Carson, who has taught seminars at Yale and remains an adviser at the U.S. Institute of Peace. “Sitting in staff briefings together for so many years, you get to know your colleagues.”

Carson’s residence at the College has been of tremendous benefit to Dartmouth students, Benjamin says. “Johnnie had an extraordinary career in government and he is widely considered the greatest Africanist produced by the Foreign Service in his generation.”

As Dickey’s director, Benjamin has tapped many contacts from his time as ambassador-at-large and coordinator for counterterrorism at State during the Obama Administration to bring a steady flow of top officials from the diplomatic, intelligence, and national security communities to campus.

“Johnnie and I worked together on a raft of issues—from Boko Haram in Nigeria to bringing Somalia back from the status of failed states. I really felt that to be able to get him into a Dartmouth classroom would be tremendous and give students unique insight into the challenges Africa faces,” Benjamin says. “We are working hard to bring the world of policy to the College, and the response from students has been terrific.”

Since the fall, other government leaders Dickey has brought to campus include Rand Beers ’64, former secretary of Homeland Security, who spent the fall term in residence as the Class of 1950 Senior Foreign Affairs Fellow; former Deputy Secretary of State Tony Blinken, who delivered the Obenshain ’62 Family Great Issues Lecture at the event marking the 35th anniversary of the Dickey Center’s founding; Michele Flournoy, the former under secretary of defense; Ambassador Dan Fried, one of the architects of NATO enlargement; Harold Koh, former legal advisor at the State Department and former dean of Yale Law School; and Ambassador Yoram Ben-Zeev, former deputy director general of Israel’s Ministry of Foreign Affairs and a participant in past Palestinian-Israeli peace negotiations, who was in residence for the month of February.

And in recent years, Dartmouth has hosted many top political newsmakers though the Dickey Center, including Albright, the first female U.S. Secretary of State; former Deputy Director of the Central Intelligence Agency Michael Morell, who was appointed to review intelligence and communications technologies in the wake of the Edward Snowden leak; and Gen. James Mattis, retired commander of U.S. Central Command and now President Donald Trump’s secretary of defense.

The leaders who come to Dartmouth do more than deliver guest lectures. Many, such as Beers and Carson, come as scholars in residence, and teach undergraduate classes and seminars, working with graduate fellows, and speaking to first year students as Great Issues Scholars. All the visitors visit classes — sometimes half a dozen or more in the course of their stay.  And all distinguished visitors, no matter the length of a visit, interact with the academic community and make connections in a variety of ways, Benjamin says.

For example, in addition to his residency, Carson has participated in Dartmouth’s Young African Leaders Initiative (YALI) for several years. YALI is a State Department-supported program that brings innovators from Africa for a summer term at leading U.S. institutions to help them develop the tools to become government, business and cultural leaders in their home countries. YALI, an Obama administration initiative, returns to Dartmouth for the fourth consecutive year this summer.

On a recent afternoon in his “U.S. Policy in Africa” class, Carson jokes about his fondness for writing with chalk as a dozen students tap on laptops around the seminar table. In this session he is drawing out thoughts from the class after a presentation on Chinese-African relations by Kojo Edzie ’20. As Carson drills down on the issues of the political motives behind China’s significant investment in African infrastructure projects, he covers the chalkboards on two walls with multi-branched outlines illustrating his analysis.

Edzie, whose father emigrated to the U.S. from Ghana in the 1970s, knew about Carson’s background and signed up for the seminar as soon as he heard he was teaching.

“I knew that my family is from the continent but I never really knew that much about what things are really like. I didn’t realize that when my dad left Ghana they were in the middle of turmoil—a coup. I only learned that when I was in this class,” says Edzie. “Ambassador Carson brings a real authenticity and a real know-how versus an academic approach. It feels like inside information.”