The outgoing chair says the board is more effective and open to strategic change. 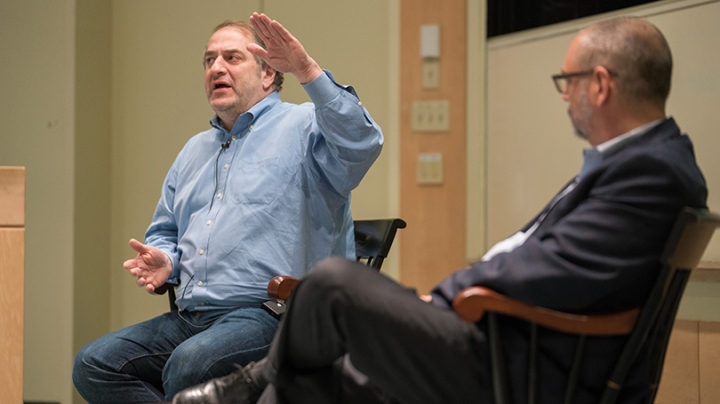 Outgoing trustee chair Bill Helman ’80, left, reflects on his eight years on the Dartmouth board during a town hall meeting hosted by Executive Vice President Rick Mills on Tuesday. Helman rotates off the board in June after serving two terms. (Photo by Eli Burakian ’00)
5/03/2017
Body

With weeks left in his tenure on the Dartmouth Board of Trustees, chair Bill Helman ’80 sees the College’s increasing capacity for change as cause for hope, and for concern.

“Things are changing here and things are changing in the world faster than they ever have before. My biggest worry is that the slope of our change is not steep enough,” Helman told a crowd of about 200 people at a town hall meeting Tuesday.

His experience as an investor and adviser to Silicon Valley tech companies has taught him how to manage disruptive change, Helman said, a skill he has brought to the board. In the past, the trustees were “a bit of a black box,” he said, with few in the Dartmouth community understanding their work. More recently, under his tenure and under the leadership of President Phil Hanlon ’77, Provost Carolyn Dever, and past board chairs Steve Mandel ’78 and Charles “Ed” Haldeman ’70, Helman said that the board had worked hard to become more open and effective.

The trustees have made great strides in improving transparency and their decision-making processes, he told the audience in Cook Auditorium at the Tuck School of Business. The meeting was one in a series of regular community forums held by Executive Vice President Rick Mills and was billed as a chance for Helman, who took over as board chair in 2014, to reflect on his eight years on the board. His term ends in June.

Overcoming the pull of tradition, the slow rate of institutional change, and human nature is hard, Helman said, but Dartmouth has an obligation to prepare students for careers in the world as it is today. “We’re in the middle of some gale-force pressures that make liberal arts different in 2017 than when I was here in ancient times. I might remember something fondly, and think we should be doing it that way, but we can’t. Everything is different.”

College leaders now need to recognize that students are also customers. Higher education must respond to the changing market, Helman said. Demand for undergraduate business and professional programs continues to rise, he said. “I don't think we’ve lost a focus on the liberal arts. But when our students are taking engineering courses like never before, when our students want comp sci like never before, you can’t ignore that.”

One alumnus asked whether creation of research and graduate programs and the pursuit of rapid change were diluting the College’s mission. Too many students today have forgotten the old songs, he said.

“This goes to the idea that students are different today. One of the things students insist upon, even the students who know the words to our songs, is to do independent research,” Helman said. “Undergraduates who are here for liberal arts want to do research.”

The majority of Helman’s observations came in conversation with the audience. He offered brief opening remarks and then spent the rest of the hour-long session taking questions from faculty, staff, students, alumni, and community residents. He was asked about a number of issues, including President Hanlon’s Moving Dartmouth Forward initiative and the new Arthur L. Irving Institute for Energy and Society.

He said early data from an outside review board show that Moving Dartmouth Forward programs and interventions—including a ban on hard alcohol—to reduce high-risk behaviors on campus have so far been a great success.

“I want every student to be happy, but I also understand that 100 percent is not achievable. I’m willing to break a little bit of glass to do what I think is right as the board chair,” Helman said. “We try to make decisions that will persist over long periods of time, not just a quarter or a year.”

Helman was asked whether the work of the Irving Institute, funding for which includes an $80 million gift from Irving Oil and the Irving family, would be independent.

“In the academic mission of the Irving Institute, the Irving family has zero input. They understand completely the need for academic freedom,” Helman said, adding that the family and the company are committed to the environment, to alternative energy, and to new technology research.

“You couldn’t have dreamed up a better sponsor,” he said. “I may not convince you in these three-and-a half minutes, but I think we found exactly the right partner and that’s a really important part of this equation.”

Helman said his final appearance in June on the commencement stage as a Dartmouth trustee will be particularly emotional for him as he watches members of the Class of 2017 march.

“As they go by, if you watch me, I’m crying most of the morning. The reason is I’m thinking that person will be a senator, there is a bio research engineer, that person might just be a good local leader,” Helman said. “I dream about the outcomes from what you do, everyone here does every day, to make that moment possible.”