The percentage of students committing to Dartmouth is the highest in at least 25 years. 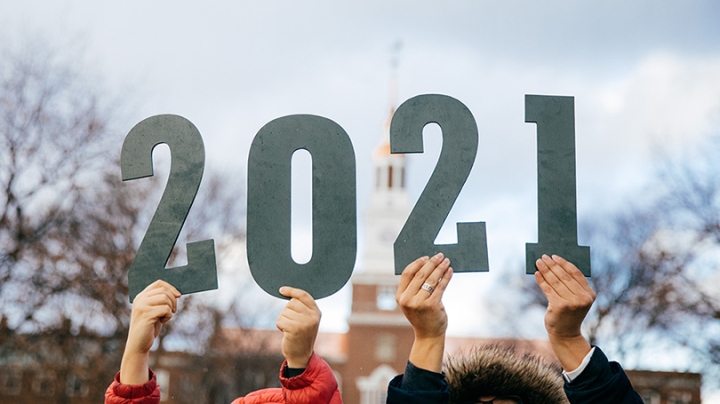 Dartmouth has experienced the strongest response to its offers of admission in at least 25 years. As of the May 1 commitment deadline, 61 percent of the students who were admitted to the Class of 2021 have accepted the College’s offer of admission, a significant increase over recent years.

Currently numbering 1,279 students, the enrolling class promises to be the most academically distinguished, globally diverse, and in all likelihood the largest in the College’s history, says Lee Coffin, vice provost for enrollment and dean of admissions and financial aid.

“The increase in yield this year was well beyond our expectations,” he says. “We look forward to welcoming this remarkably talented and diverse group of students to campus in the fall. This kind of one-year shift is impossible to anticipate and, in fact, unprecedented at Dartmouth.”

Provost Carolyn Dever credits Coffin, who is in his first full year at the College, for selecting students seeking a world-class Ivy League education with the qualities that set Dartmouth apart. Put simply, Dever says, the new members of the Class of 2021 are an excellent fit.

“Lee understands that Dartmouth is an exceptional blend of a liberal arts college and a small research university,” she says. “During April’s enrollment process the admissions team accentuated the access incoming students would have to work alongside our incomparable teacher-scholars. Not surprisingly, that was an incredible draw for the high-achieving students who were invited to join the incoming class. We are thrilled by the quality and embrace the unexpected quantity of the Class of ’21.”

Coffin says, “Highlighting the College’s outstanding faculty and excellence in teaching in this spectacular setting—a sense of place with a sense of purpose—proved to be persuasive.”

The current enrollment is expected to shift downward over the next several weeks as students request gap years or change their plans, Coffin says. “The incoming class will clearly be larger than anticipated, but less so than it is today.”

He says the annual Dimensions of Dartmouth programs in which accepted students visit Dartmouth were very effective this year in representing the College “as a singular place for a very specific kind of high-achieving student.”

During a Dimensions event in April, Meredith Kelly, right, an associate professor of earth sciences, talked to prospective students and their families about her research on sediment cores. (Photo by Robert Gill)

This year’s Dimensions showcased excellence in teaching as its theme, which Coffin says was “a key factor in the enhanced response rate to our offers of admission.”

“We led with one of Dartmouth’s signature strengths and introduced a compelling series of faculty presentations that underscored the concept of scholars who teach. That direct contact with Dartmouth’s faculty was wildly popular. The energy was clear,” he says.

More than 70 percent of students attending Dimensions joined the incoming class. In recent years, 55 to 60 percent of Dimensions visitors enrolled at the College.

Two notable shifts in the composition of the Class of 2021, when compared to recent entering classes, are the incoming students’ academic strength and global diversity.

The percentage of students who currently reside outside the United States increased from 8.3 to 12 percent; 10 percent of the Class of 2021 are foreign citizens, the largest percentage on record. Approximately half the foreign students were offered need-based scholarships.

“This strategic expansion of our international community is one of the exciting highlights of this admissions cycle, reflecting a new opportunity for an increased global presence at Dartmouth,” says Coffin.

Preliminary figures highlight a wider socioeconomic range of students receiving need-based financial aid, which will total more than $26 million for the entering class, with an average grant of over $48,000.  In addition, the number of students who are eligible for federal Pell grants, given to those with the greatest need, rose to 14 percent.