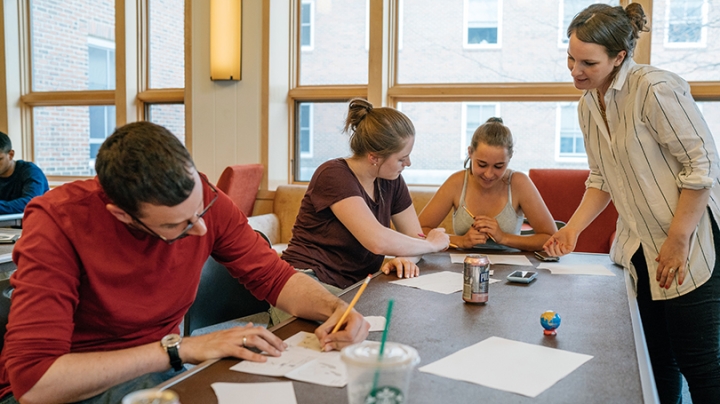 It’s mysterious behavior to an observer expecting an ordinary German language class. But Line Hoven’s “German 82: “Drawn to Life: The German Graphic Novel” is anything but ordinary.

“Every day, to take attendance, we draw little self-portraits of ourselves,” explains Tara Sweeney ’19.

Hoven is this year’s Max Kade Distinguished Visiting Professor. A celebrated German illustrator, she is the author of the 2008 award-winning debut graphic memoir, Liebe Schaut weg (Love Looks Away), which chronicles how members of the German and American branches of her family reconcile cultural differences and remember—or avoid remembering—fraught histories, including from the Nazi era.

Each spring, with funding from the Max Kade Foundation, a national organization that encourages cultural exchange between Germany and the United States, the Department of German Studies hosts an artist, writer, or scholar to campus for a full term. (The foundation also supports the Max Kade German Center, an undergraduate living-learning residence.)

The professorship is an opportunity for the German department to bring prominent German scholars, artists, and writers to Dartmouth to engage with students and faculty, says Associate Professor Yuliya Komska, who invited Hoven.

“It’s important to the faculty to get someone who’s different from us,” Komska says. “We’ve had writers, poets, a filmmaker. These creative people can offer our students something that we cannot—they can both do creative work with students and talk about what it means to be a living, breathing, creative person working in Germany.”

“It’s good that the German department brought over someone who’s not the typical classical literature type of professor,” says Ilona Kiss ’15. “I’m a German major and I love art, but I didn’t have a chance to do a course related to art before now. So when I saw there was a German course that was related to art I decided that I had to take it.”

Komska says faculty, too, “learn about what it takes to produce the cultural artifacts that we study—the economics, the logistics. It’s been completely eye-opening for me in many ways.”

Hoven is on the vanguard of a burgeoning German contemporary graphic literary scene—a relatively new phenomenon, Komska says. “In Germany, comics were seen as a lowbrow, superficial American genre—not a part of high culture, and therefore not worth subsidizing or engaging with until very recently.” The shift began, she says, when a group of German editors started actively promoting more serious graphic works. (One of these editors, Frankfurter Allgemeine Zeitung’s Andreas Platthaus, will be speaking about the trend at 4:30 p.m. Thursday, May 18, in 206 Dartmouth Hall.)

“I was really lucky that my book was published at the time it was published,” says Hoven. “There was a big hype in Germany around the new graphic novelists.” Germany’s official cultural institution, the Goethe-Institut, invited Hoven on a world tour to share German culture, which gave her an opportunity to lead workshops across Europe and Asia.

Komska met Hoven two years ago during a language study abroad program in Berlin, when she invited the Hamburg-based artist to speak to her “German 3” class, which was reading Liebe Schaut weg. Hoven taught the class to draw on scratchboards, the painstaking, etching-like technique used in the book.

An example of Line Hoven’s scratch art, from a poster for her solo exhibition, Busy Doin’ Nothing, in Rüsselsheim, Germany, last fall. (Image courtesy of Line Hoven)

“She did an amazing job and the students just adored what she had to say,” Komska says. The experience made Komska think Hoven would be a good candidate for the Max Kade professorship.

Back at Rauner, Hoven’s class examines samples from the library’s collection of “mem books”—scrapbooks kept by Dartmouth students in the late 19th and early 20th centuries. After introducing the books’ context to the class, Special Collections Librarian Jay Satterfield walks from table to table, helping students interpret items they find in the books, from dance cards and ticket stubs to mementos of hazing—even a telegram from one student’s family reporting on their rescue from the Titanic.

“The subtext of our course is identity and what identity is made of,” Hoven says. “We are going into family memories and memory itself, and how an identity is pictured or re-pictured in memory books or diaries or photo albums. I want the students to invent a story of the memory book they’re looking at—to make up the story of what they think this person could have been like by looking at the things they left behind in their memory books.”

Hoven is as focused on developing students’ creativity as she is improving their German. In addition to reading a variety of contemporary German graphic novels, the students—many of whom have no prior art experience—complete drawing assignments and play a variety of creativity-generating games in class, many of which are inspired by cartoonist Lynda Barry’s book Syllabus: Notes From an Accidental Professor.

When the class read German cartoonist Mawil’s Kinderland, a coming-of-age story set in East Germany, for example, Hoven says, “I wanted students to get back in the mode of what it’s like to be a child a little bit, and I thought they should draw while they’re doing that. We were talking about things they played when they were children. I tried to get them in this state of mind, and that’s what I want to do with all the books.”

“This class challenges me to be creative, which isn’t a side that I’ve necessarily been asked to explore in my other classes,” says Irene Lee ’19.

“This is one of my favorite courses at Dartmouth,” says Sweeney. “She tries to make the class fun and engage us. She’ll decorate the room, have us play games, and work on our drawing skills with games.”

The students have also had opportunities to Skype with artists whose works they’ve read, including Ulli Lust, author of Heute ist der letzte Tag vom Rest deines Lebens (Today Is the Last Day of the Rest of Your Life).

“It was really cool because we read the text and got to ask Ulli Lust questions about her life and her work,” says Cameron O’Reilly ’17. “That was a unique experience that Professor Hoven could mediate for us.”

“I hope that each student walks out of this class in the end with some kind of sense for their cultural identity and that these things might help them on their way to see what person they are, or what they want to be,” says Hoven.

And, she adds, “Their German should improve a little bit also. Like the correct use of articles.”