The biology and Russian major is honored for language, literature, and culture studies.

Aldo Arellano ’17 has been selected as a 2017 Russian Scholar Laureate by the American Council of Teachers of Russian (ACTR).

While his major in biological sciences took him to Iceland last summer, the spotlight is now on his second academic major: Russian language and literature. Arellano was nominated for the award by members of the Department of Russian at Dartmouth.

“Aldo Arellano is a person who embodies the best qualities of a post-secondary Russian language student: an unfailing devotion to and a passion for Russian language, literature, and culture; a commitment to excellence; and an enthusiasm for knowledge and cultural literacy,” wrote the ACTR.

“Aldo has been our student for four years and he is one of the best. He is very enthusiastic about everything related to Russia,” says Alfia Rakova, a research assistant professor and director of the language program. “Aldo took all our language classes and he was one of the strongest students,” adds Rakova, who was Arellano’s Russian language teacher.

When Arellano arrived at Dartmouth, he was interested primarily in science. However, a high school encounter with Russian literature predisposed him in that direction as well. “I decided to take Russian classes with the goal of reading those books that I so enjoyed in high school in the original Russian,” he says.

“I have always thought of literature as a poignant way to understand the time in which it was written,” Arellano says. “You can really track the history of a culture through its literature in a way that is reflective of the times and their philosophical ideas.”

Eager to learn more about all things Russian, he spent his college freshman summer on a Language Study Abroad (LSA+) program that took him to St. Petersburg, Moscow, and Novgorod—an experience that further deepened his interest in Russian history and culture.

“Aldo is an uncommonly gifted young man.  His calm demeanor, brilliant mind, and deep empathy for others and their cultures, have been an inspiration to us all in the Russian department, professor and student alike,” says Associate Professor of Russian Deborah Garretson, who led the LSA+ seminar.

Arellano took a playwriting workshop in which he was assigned to write a play in the style of Chekhov. “Aldo decided to set his play in Russia in the 1890s. He conducted independent research into the historical context relevant for the circumstance of the play and produced a creative work with a thoughtful understanding of the distinct features of Chekhovian dramaturgy,” says Victoria Somoff, a professor of Russian.

Joseph Sutton ’76, a senior lecturer in the Department of Theater, co-taught the course. “It was Aldo’s genuine and deep interest in Russian language and culture that motivated his exploration of Chekhov’s drama and engendered a piece of creative writing that was both historically informed and artistically original,” Sutton says.

“I took the playwriting course on Chekov because he is my favorite Russian playwright,” Arellano says. “I read all his plays and tried to mimic his style. There have been many interesting courses like this that, had I not explored Russian as a major here, I would not have had access to.”

Assistant Professor of Russian Lynn Patyk noted that Arellano had been the only freshman among advanced students in her Dostoevsky seminar during the spring 2014 term. “The culminating project of the course entailed creating a Wiki page detailing an aspect of Dostoevsky’s historical context and the way in which it was portrayed in the novels,” she says. “Aldo chose poverty and composed an exemplary Wiki page that was thoroughly documented and illustrated with well-chosen images.”

Arellano’s enthusiasm for all things Russian has been contagious to his fellow students. “In his second-year Russian language class, his presentation (in Russian) on ‘My favorite book’ was on The Brothers Karamazov. It was so good and convincing that other students decided to read it, too,” says Rakova.

Professor of Russian and Comparative Literature John Kopper adds that Arellano was also active on Dartmouth’s Russian social scene. “Aldo was one of our Russian Tea weekly gatherings organizers and, in the fall of his sophomore year, he organized on his own a weekly Russian table in the Dining Hall where students and professors gathered to eat and speak Russian,” says Kopper. “His passion for Russian culture and food also contributed to the success of our annual Russian picnic in May where everyone prepared Russian food and spoke Russian.”

Russian faculty and students gathered on April 19 for a party celebrating Arellano’s selection as a 2017 Russian Scholar Laureate. Rakova says that another party is planned for June 10 as a sendoff for Arellano and his fellow graduating Russian majors. 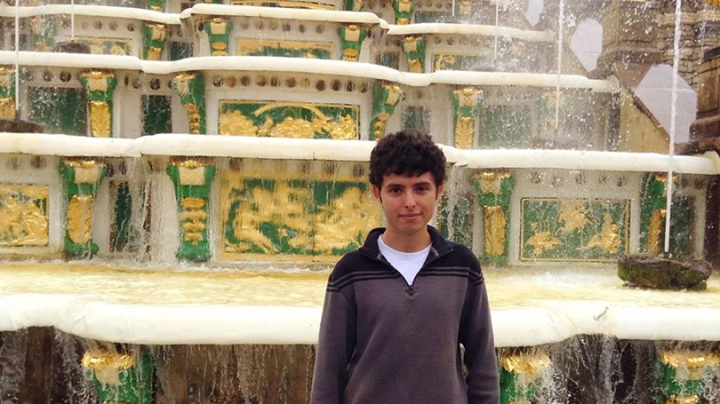 Aldo Arellano stands before the Grand Cascade fountains at the Peterhof Palace during his LSA+ visit to St. Petersburg, Russia. (Photo by Sarah Best)
Written by
Joseph Blumberg
Share this
FacebookTwitterEmail
Articles