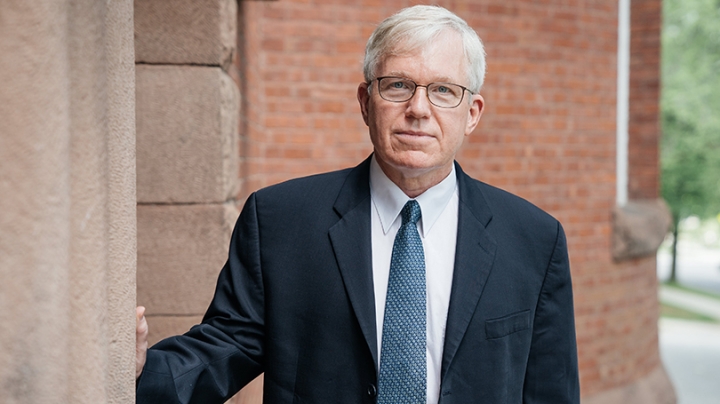 Dennis Washburn, the Jane and Raphael Bernstein Professor in Asian Studies, will be the next Frank J. Guarini Associate Dean for International Studies and Interdisciplinary Programs, Dean of the Faculty of Arts and Sciences Michael Mastanduno has announced.

“Dennis brings a wealth of experience to his new role,” says Mastanduno. “The care and precision he brings to his scholarship at the intersection of Japanese studies, comparative literature, and film and media studies will serve him well in this position.”

Washburn received his MA in English literature from Pembroke College, Oxford, and his PhD in Japanese literature from Yale in 1991. Before starting his doctoral work, he studied at Waseda University on a Japanese Ministry of Education fellowship. He has published extensively as a scholar and translator, earning, in 2008, the Japan-U.S. Friendship Commission Prize for Translations from the Donald Keene Center for Japanese Studies at Columbia University. In 2004, he was awarded the Japan Foreign Minister’s Citation for promotion of cross-cultural understanding.

Since arriving at Dartmouth as an assistant professor in 1992, Washburn has been recognized with the Goldstein and Huntington Awards for outstanding teaching and mentoring. He served as a member of the Committee Advisory to the President, and chaired the Comparative Literature Program and the Asian and Middle Eastern Studies Program. Washburn is also a house professor in Dartmouth’s new residential system.

His translation of The Tale of Genji (Norton, 2015), a monumental work from the early 11th century, has been called “a fluid, elegant rendition” by The Washington Post. Working with the Neukom Institute and with colleagues in the United States, Japan, and Europe, Washburn has begun to create a customizable digital workspace for scholarly textual and visual analysis of The Tale of Genji.

“I bring an eclectic range of approaches to bear on the subjects I investigate,” says Washburn. “And as associate dean, I’ll try to make sure that our faculty have the resources and support they need to do innovative things across academic disciplines.” The best interdisciplinary courses, he says, “are either team-taught by faculty from different fields, or actively highlight the knowledge produced by seeing directly how different disciplines approach a problem or ask a question.”

To prepare for his four-year appointment, Washburn says he’ll seek input from colleagues about how to build on successes in multidisciplinary and off-campus courses at Dartmouth. “Travel, by definition, is experiential education, but we can always find new ways to engage students more deeply in the hands-on learning about cultures other than their own,” he says.

Washburn, who will begin his new role on July 1, succeeds N. Bruce Duthu ’80, the Samson Occom Professor of Native American Studies, who has held the position since last July.