Dogs, Dancers, and Sheep Star in World Premiere on the Green 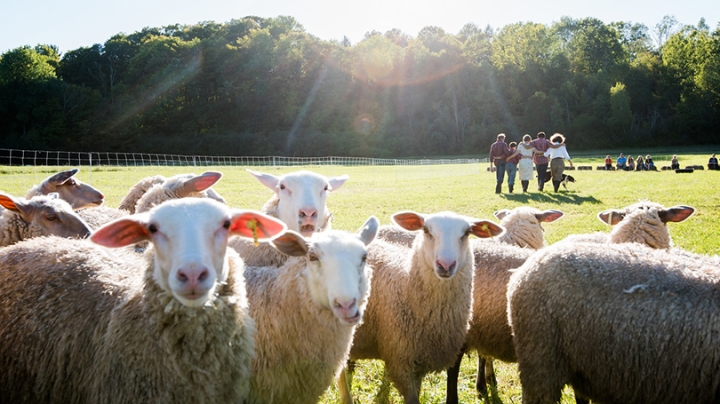 The cast of Doggie Hamlet, including a flock of sheep, offered a preview presentation last year in Westminster West, Vt. (Photo by Kelly Fletcher)
6/27/2017
Body

Centuries ago, sheep and dogs and people mingled on the Green, which, in the early days of the College, served as a pasture. This week, livestock will return to campus in one of the most unusual world premieres ever to come to the Hopkins Center for the Arts. It’s called Doggie Hamlet, and on Thursday, it will kick off the Hop’s summer programming.

In the partly improvisational production, dancers will be guided by rules about how to respond to the animals’ unpredictable movements. “For example, at one point they are supposed to stalk the sheep,” says the choreographer, Ann Carlson. “If the sheep go to one corner, they go there, but if they go to another corner, they shift their line in that direction.”

Carlson, who is based in California, thinks of her piece as “a 3-D pastoral poem” that raises questions about “what is domestic, what is stewardship, what is domination. It kind of toggles between the symbolic and the real, because the sheep, after all, are real, and yet we also think of the things sheep stand for and hold for us.”

She says Doggie Hamlet was inspired by three literary works: Shakespeare’s Hamlet, Kipling’s The Jungle Book, and David Wroblewski’s 2008 novel, The Story of Edgar Sawtelle, about a boy who was born mute and uses gestures to communicate with the dogs he raises.

Enter the sheep, Carlson’s addition to the story. In Hanover, they’ll be supplied by Stephen Wetmore, a nationally known border collie trainer from Strafford, Vt. But Wetmore’s dogs will not be in the production. The canine cast members come courtesy of Diane Cox, a sheep farmer and sculpture professor at Alfred University. Wetmore isn’t sure what to expect when his flock interacts with dogs they don’t know.

“They’re just sheep,” he points out. “They generally just want to stay away from the dogs, so we’ll just see what happens when it happens.” Whatever happens will be contained by a wire fence, which Carlson sees as a kind of frame for a “moving collage.”

Dartmouth, she says, is an ideal site for the first public full-length performance. “We’ve done it on sheep farms, but this will be the first time we try it in a more urban context, where the ambient soundscape will include people and cars as well as the dog handlers’ commands,” says Carlson. “The Green is so gorgeous, and there’s so much history of livestock grazing there. I also love hearing bell tower chimes ring.” She says there is a ceremonial element to the piece, but it also has humorous moments.

“We are so proud to be presenting Doggie Hamlet, which is in keeping with the groundbreaking, remarkable work we are known for at the Hopkins Center,” says Mary Lou Aleskie, the Hop’s Howard Gilman ’44 Director. “The show’s connections to community-based traditions make it even more resonant.”

This is not the first time Carlson has brought her work to Dartmouth. In 1997, she developed and premiered a project with the College’s custodial staff, spending time with them during the year, then creating a performance including staff members, who took center stage at the Hop.

An innovator whose work has been seen in theaters, galleries, and museums around the world, Carlson often works with unconventional and nonprofessional performers, including fly fishermen, nuns, corporate executives, security officers, poker players, gardeners, and physicians. She has received more than 30 commissions and numerous awards, including consistent support from the National Endowment for the Arts.

As New York Times dance critic Gia Kourlas writes, “Ms. Carlson’s projects are considered, detailed and grand in their seeming simplicity. Few artists are so able and even willing to bridge the gap between art and the everyday at such a high level, but Ms. Carlson does so by documenting life’s beauty and absurdity. She unearths what’s wise in absurdity and shows how something that might appear banal can suddenly become luminous.”

Doggie Hamlet was developed in part during a residency at Vermont Performance Lab, which presented a preview of the work in 2016. After the Hop premiere of the completed work, the production moves on to Jackson Hole, Wyo.; Philadelphia; and Los Angeles. The work was selected for funding by New England Foundation for the Art’s National Dance Project (2015) and Creative Capital’s Map Fund (2014).

Sponsored by the Hop, the Dartmouth Sustainability Office, Vital Communities, and the Howe Library, the June 29 performances, at 4:30 and 7 p.m., are free and open to the public. In conjunction with Doggie Hamlet, the Hop is presenting activities this week for all ages, including a dance class, a book discussion, and a hands-on “sheep to shawl” exhibit.