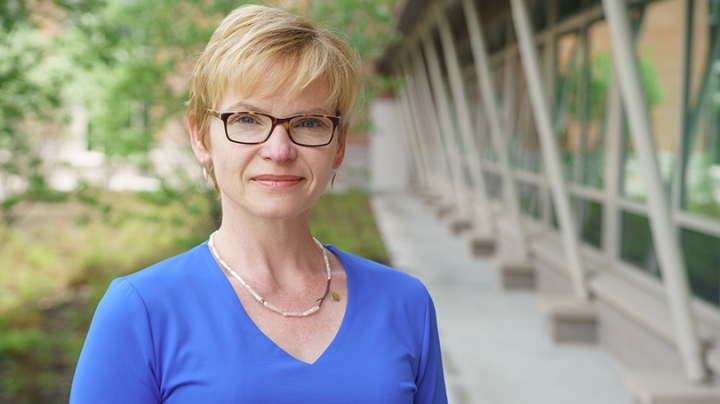 Professor Elizabeth Smith has served as associate dean of the sciences in the Faculty of Arts and Sciences for the past two years. (Photo by Eli Burakian ’00)
6/21/2017
Body

Smith, who has served as associate dean of the sciences in the Faculty of Arts and Sciences for the past two years, and before that served as chair of the Department of Biological Sciences for three years, will succeed Dean Michael Mastanduno on July 1. Mastanduno, the Nelson A. Rockefeller Professor of Government, has spent seven years as dean.

President Hanlon says that Smith’s track record shows her to be eminently suited to lead the arts and sciences.

“Elizabeth Smith is an outstanding professor and researcher whose wealth of experience in training students at all levels goes hand in hand with her inspiring vision for arts and sciences along with her commitment to support faculty as they achieve new heights. I am delighted that she will be the next dean of faculty, and will look forward to working with her on strengthening academic excellence at Dartmouth,” he says.

Smith, who will serve a five-year term and oversee 41 departments and programs and about 450 faculty members, says she’s looking forward to leading arts and sciences.

“The dean of the faculty plays an essential role in shaping and communicating the mission of the faculty, as well as securing the necessary resources to carry out that mission. I am deeply honored to serve the faculty as their dean and look forward to working with faculty members in all divisions to realize their highest aspirations,” Smith says.

“With the increasing pressure to justify the value of a liberal arts education and, at the same time, to compete for the best students and faculty within that space, the current climate in higher ed may seem unstable, even volatile,” she says. “But I see this time as dynamic and energized. From my perspective, the conditions are ripe for transformative action, and Dartmouth has all of the right ingredients to be a leader in that transformation. Collectively, we must ensure that actions result in progress that supports our collective mission and core values.”

Provost Carolyn Dever says Smith will be a strong advocate for the highest standards in teaching and research.

“Elizabeth’s creative and inclusive approach to leadership makes her a truly exciting choice for this important role. Her knowledge and experience will be invaluable in working with the faculty in their distinctive scholar-teacher mission,” says Dever.

A scientist whose research focuses on the assembly and motility of cilia and flagella—structures on the surface of cells—Smith has trained undergraduates, graduate students, and postdoctoral associates in her lab, which has been continuously funded by the National Institutes of Health since her arrival at Dartmouth in 1998. She has also received funding from the National Science Foundation and the March of Dimes Foundation for her research.

In addition to her research and teaching, Smith has had an active interest in connections between the arts and the sciences. As biological sciences chair, she worked with the Hood Museum of Art to commission a sculpture by artist and alumnus Gar Waterman ’78 for the Class of 1978 Life Sciences Center. With support from the Andrew W. Mellon foundation, she worked with the Hopkins Center for the Arts to connect science faculty with emerging composer Fay Wang to commission a musical interpretation of microbiology.

“The arts and sciences are more similar than you might think,” says Smith. “The output of both disciplines requires enormous creativity and a high level of technical proficiency. Both result in new ways of thinking about the world around us. And where the two intersect, the results can be incredibly powerful.

“Dartmouth should be a place where the greatest minds come together to ask difficult questions and engage in creative and critical thinking to generate new knowledge and solve important problems. I feel very strongly that the institution also has a moral obligation to set an example to the world for how to engage in deep, honest, inclusive, and respectful discourse about the most controversial issues of our time,” she says.

Smith came to Dartmouth in 1998 as an assistant professor. She was named a full professor in 2010 and served as chair of biological sciences for three years, beginning in 2012. She has served on a number of committees and has worked across schools. She was a member of the Graduate and Advanced Studies Task Force for the development of the School of Graduate and Advanced Studies, and co-chaired the Science Strategy Working Group, tasked by Dever to develop a strategy to guide future investment in the STEM fields across campus.

In her professional service, Smith has served as chair of a Gordon Research Conference, an international forum for the presentation and discussion of frontier research in biological, chemical, and physical sciences. She is currently serving on a National Institutes of Health Study Section, a panel that performs peer reviews of grant applications. In 2014, she received the Dauten endowed professorship at Dartmouth. A year earlier, she was inducted into Dartmouth’s Phi Beta Kappa Society chapter as an honorary member. She has received a number of external honors and fellowships, including being chosen as a K.R. Porter Fellow by the Porter Endowment for Cell Biology in 2008. The endowment, named for the researcher considered to have established the field of cell biology, honors mid-career scientists who have the potential for an outstanding career in cell biology.

Smith received her bachelor’s degree in biology with honors from Agnes Scott College and her PhD in cell and developmental biology from Emory University. Before coming to Dartmouth, Smith spent six years at the University of Minnesota, where she received a prestigious American Cancer Society fellowship for her post-doctoral work in genetics and cell biology.

Mastanduno, an expert in the field of international relations, served a five-year term as dean and then, at Hanlon’s request, agreed in 2015 to serve another two years. After a yearlong sabbatical beginning July 1, Mastanduno will return to teaching and research at the College.

Smith’s appointment follows the appointment in March of N. Bruce Duthu ’80 to the dean’s post. Duthu, the Samson Occom Professor of Native American Studies at Dartmouth, declined the appointment last month, citing controversy over his support four years ago, as a member of the Council of the Native American and Indigenous Studies Association, of a boycott of Israeli academic institutions, which he said had become a distraction with the potential to undermine his ability to serve effectively as dean.

Dever and Hanlon thanked the search committee members for their work on this important search. Cottingham and Domosh, speaking on behalf of the committee, say they are very pleased with the selection of Smith as the next dean.

“Elizabeth is an outstanding scholar with an international reputation in cell biology. As associate dean for sciences, she has worked tirelessly to champion Dartmouth’s teacher-scholar model, attract the very best new faculty, and build bridges not only across the arts and sciences, but to the Geisel School of Medicine and Thayer School of Engineering. We look forward to working with her to champion the liberal arts at Dartmouth,” the co-chairs said in an email.

A search for the next associate dean of the sciences will begin soon.