The government major will spend the summer in Xi’an, China, on a Critical Language Scholarship. 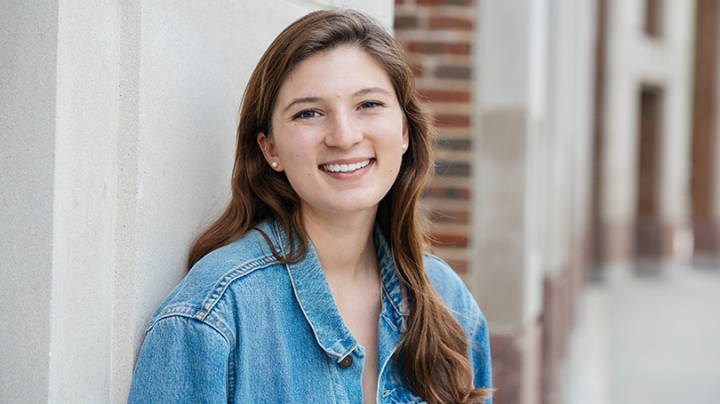 Emily Carr ’18 has been awarded a Critical Language Scholarship (CLS) to spend this summer immersed in Chinese language and culture in Xi’an, China.

The scholarship, sponsored by the U.S. Department of State Bureau of Educational and Cultural Affairs, is part of a government program aimed at training American students in one of 14 languages—from Arabic to Urdu—that are “less commonly taught in U.S. schools, but are essential for America’s engagement with the world,” according to a State Department press release.

This year, about 550 students from U.S. colleges and universities received the competitive award. A total of 15 Dartmouth students have participated in CLS programs since the scholarship was first offered in 2006, including, most recently, Brenna Gourgeot ’18, who studied Arabic in Tangier, Morocco, in 2015, and Freya Jamison ’17, who studied Arabic in Nizwa, Oman, in 2014.

A government major minoring in French and Chinese, Carr began studying Chinese as a sophomore.

“I already spoke French coming into Dartmouth, and I wanted to learn a non-Western language because I wanted that different worldview,” she says. “I feel like you can’t really understand a culture and a people unless you speak the language. I ended up picking Chinese because a lot of security policy and international relations right now are focused on China. I thought Chinese would be the most important language that I could learn for being involved in international relations and for helping to build that mutual understanding.”

Her decision was helped, she says, with advice from Associate Professor of Government Daryl Press. “I took ‘Gov 5’ with him my freshman year, and he talked a lot about U.S.-China relations and how this was the focus of the majority of America’s security policy right now. That was really impactful for me. I met with him and asked his opinion about learning languages, because I was choosing between Arabic and Chinese. I was leaning toward Chinese anyway, but he kind of pushed me in that direction.”

Her first instructor in Chinese, Associate Professor Emeritus Susan Blader, “helped me overcome the initial ‘what am I doing’ feeling when I started taking it,” she says. “She pushed us to work extremely hard, but she had this huge amount of confidence in me that was really inspiring,” Carr says.

Carr, who has set her sights on becoming fluent, organized her sophomore year around studying the language, taking three terms of Chinese, then participating in an advanced language study abroad (LSA+) program in Beijing. “I’m a really goal-oriented person, and having that focus of Chinese—a five-day-a-week class every morning and four-day-a-week drill, just constant studying—was a lot, but moving towards that goal. Starting out not knowing a word of Chinese and then actually being able to have conversations by the time that I was leaving Beijing was incredible.”

As part of the LSA+ in Beijing last year, Emily Carr ’18 and her classmates had the chance to travel to Tibet. (Photo courtesy of Emily Carr ’18)

The LSA, she says, was life changing. “I didn’t know how I’d feel about being in China, but it’s electrifying to be there,” she says. She describes a moment during the LSA when she realized she could communicate in her new language—on an overnight train back to Beijing after a weekend of travel.

“It’s probably about 3 a.m., and this woman across from me just starts talking to me. I’m like, oh no, I’m so tired, I’m not going to understand a word she says. And then I just understood,” she says. “I had this whole conversation with her about her son who was studying abroad in Japan. It was incredible that I could understand her. It was just this amazing, eye-opening experience.”

That experience made her eager to go back to China as soon as she could. “I knew that I wanted to be close to fluent, and that I wasn’t going to get there unless I stayed in China. A friend told me about the CLS program, and I was like, this is it—this is how I get there. So I applied.”

In Xi’an this summer, Carr will be living with a Chinese roommate and taking 20 hours of language classes a week for two months—a program intended to advance students a full year of proficiency, she says. “The idea is to only speak Chinese, which is probably going to be interesting at the start, but in the end it gets you to a pretty crazy place, language-wise. The goal is just this intensive level of immersion, which is sometimes intimidating, but also exactly what you need to get you to that language point.”

As for what she’s looking forward to most in returning to China, there’s no doubt. “I miss Chinese food so much,” she says.