This term, women have staged an unprecedented number of theater projects. 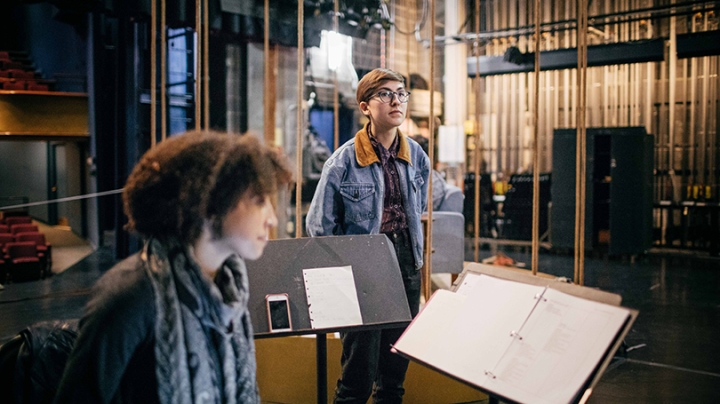 Over the course of three performances in May, small, sold-out audiences—54 people at a time—took their places on stage at Moore Theater in the Hopkins Center for the Arts for an immersive production of three scenes from Shakespeare’s As You Like It, Twelfth Night, and The Merchant of Venice.

The production—which placed viewers within scenes where female characters appear disguised as men—was Away This Night, a senior thesis project conceived, designed, and co-directed by Julie Solomon ’17. “I wanted it to be a culminating experience for my work as a set designer at Dartmouth and as a woman on Dartmouth’s campus,” Solomon says.

“We are so excited about this explosion of feminist energy that’s happening this term,” Edmondson says.

“The breadth of what these young women are doing is pretty extraordinary,” says Horton.

In addition to Solomon’s project, the productions include:

Edmondson and Horton say the theater department has long tried to open doors for students to realize their artistic visions—providing resources, staff, even outside directors and design expertise. Despite that, students and faculty alike have often struggled to find projects that showcase strong women.

“We need to acknowledge that our students are often frustrated about what they see as a lack of opportunity for female actors,” Edmondson says. “This is a historic legacy of our discipline—not just our department.”

In recent years, that frustration has driven students to create opportunities of their own, Edmondson says. “It speaks to their tenacity—their willingness to seize the opportunity that we offer and make the kind of theater that they think should be happening more in the world.” (To commemorate the five productions this term, the theater department has commissioned student filmmakers Christian Williams ’19 and Olivia Powell ’17 to make a documentary, Five by Five: Dartmouth Women Center Stage.)

Ogden says she was sure the theater department would balk at her proposal to stage Monica Byrne’s What Every Girl Should Know, which is particularly frank about women’s sexuality. “I thought there was no way the department would approve the show. It’s really risqué,” she says. “But they’re really excited about it, and what’s been so exciting for me is how excited the faculty that I trust and admire are, and how much trust they’ve put in me in terms of resources and time and talent.”

The success of students from recent years has helped drive the ambitions of current students. “A lot of us this spring were inspired by previous students and mentors who have started these conversations at Dartmouth,” says Solomon. “I want to continue that legacy of challenging theatrical conventions, whether it be through gender or design, and create a space where people can innovate and really push boundaries.”

“It’s always great to see your peers doing work,” says Wien. “I think representation is so important. Once you have one person step up, people see that and they’re more motivated to do it. A lot of my role models doing theater here were women, and I think the more work you see, the more work you get excited by.”

One project from last year that continues to have an impact is the production of Ntozake Shange’s For Colored Girls Who Have Consider Suicide When the Rainbow Is Enuf—an honors thesis project by Carene Mekertichyan ’16. For that show, the department hired guest director Deena Selenow, who returned to Dartmouth this spring to co-direct Solomon’s Away This Night.

“I worked with Deena last spring on For Colored Girls, and I specifically wanted her to help me think about how our gender, our sexual identity, our race influences the way we inhabit space,” Solomon says. “It’s really helpful to have a director who knows how to work with actors.”

Fool Bear-Vetter’s play, Crickets Ate the Moon, won the inaugural Yale Indigenous Performing Arts Program playwriting contest last year. Though she is on a leave of absence from Dartmouth this year, the fact that fellow students wanted to produce her work here meant a lot, she says.

“It was really exciting to tell a story that people might not have heard before, because there aren’t a lot of stories about Native women, and particularly not at Dartmouth,” she says. “I’ve had a lot of people, more than I expected, saying, ‘You know, I really saw myself in Lena,’ the lead character. To my friends it’s no secret that Lena is somewhat modeled after me. For me to write something so personal that I was scared to put it out into the world, and to have people take this specific story and say, I relate to this—that was the most powerful feedback for me.”

Equally powerful for her was the opportunity to provide a creative outlet for other Native American students. “There haven’t been a lot of productions where there was a role that felt completely right for me, or that no one was bending their perception of reality to accept me in,” she says. “It meant so much that my work could be the thing that does that for other Native students.”

The productions are having an impact on campus beyond the theater community. Gaudet says her production has generated conversations about feminism in some perhaps unexpected places.

“I was in a fraternity with some of my friends—not necessarily the place that you think of when you think of feminism—and members of the frat came up to me and said that they had seen the play and they really loved it,” Gaudet says. “They wanted to know my ideas on all these different aspects of it. That made me happy, because feminism is something that we don’t often talk about, and it should be something that you can talk about in a fraternity, in a sorority, in and outside of a classroom. I think theater allows that.”

Several of the students describe a sense of urgency to create works that speak to the current political and social climate beyond Dartmouth. “It’s making these communities of arts fight for what they have,” Fool Bear-Vetter says. “I think women in particular are realizing that they can take charge of the stories that are being told. People are realizing that art is a necessity and that arts are an instrument of revolution. Theater is an instrument of revolution and change. I think we’re finding power in that.”