Iara Backes ’19 and Joshua Ramos ’19 have been active members of Geisel’s LMSA chapter. 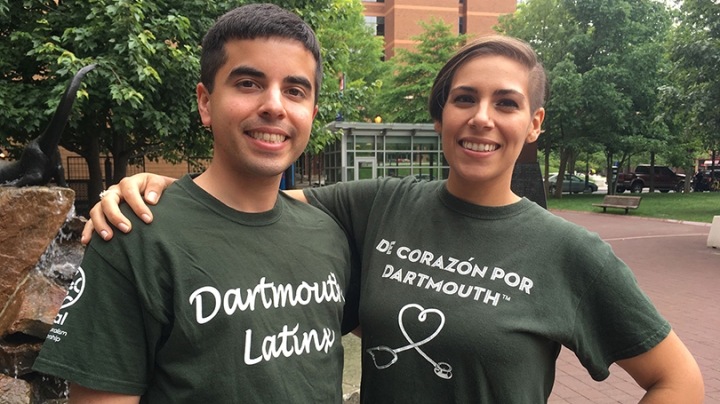 Joshua Ramos ’19 and Iara Backes ’19 were elected to leadership positions with the LMSA Northeast Region. (Photo courtesy of the Geisel School of Medicine)
6/23/2017
Body

Read the full story by Susan Green, published by the Geisel News Center.

Iara Backes ’19, co-president of the Geisel School of Medicine’s chapter of the Latino Medical Student Association (LMSA), has been elected president of the organization’s Northeast Region for a two-year term. And Joshua Ramos ’19  was elected chief financial officer of the Northeast Region for a two-year term. Backes succeeds Adrianna Stanley ‘18 and Freddy Vazquez ’18, and will spend one year as president-elect while transitioning to the role as president.

Both Backes and Ramos are active members of Geisel’s LMSA chapter. Given that experience, Backes says she wanted to be more involved with the organization on a regional level. During last fall’s LMSA regional meeting, she and Ramos learned about upcoming leadership positions, discussed possibilities, and decided to pursue positions that played to their strengths.

“I’m good at bringing people together around a common goal and getting it accomplished,” Backes says of her bid for the position. “As president, you need to understand each role within the organization to make sure you are helping everyone meet the mission. It’s the president’s responsibility is to make sure the group is functioning well and I am able to do that while making sure the needs of a group are being met as we move forward.”

In his new role as chief financial officer, Ramos says that by managing the regional chapter’s budget, he will continue supporting people as they move through the pipeline from undergraduates to medical students and beyond.