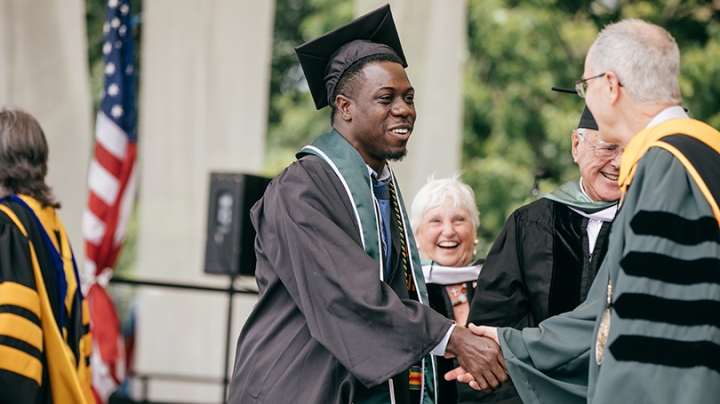 Marc Sepama ’17 gets a congratulatory hug from Bob King ’57 while Dottie King looks on. (Photo by Eli Burakian ’00)

When they marched onto the Green for the commencement ceremony on June 11, Marc Sepama ’17, from Burkina Faso, and Theo Wilson ’17, from Jamaica, became the first King Scholars to graduate from Dartmouth.

As undergraduates, Sepama and Wilson participated in the King Scholar Leadership Program, which Dottie and Bob King ’57 started in 2012. At commencement, both Kings received honorary degrees, as President Phil Hanlon ’77 noted at the ceremony, for their “compassion, generosity, and profound commitment to improving the quality of life in impoverished nations around the world.”

Sepama and Wilson say they are proud to be the first graduates of a program that prepares international students to fight global poverty. And they feel close to the couple who helped them come to Dartmouth.

The Kings, who have donated more than $35 million to the program, are international investors and partners in philanthropy. They often open their Menlo Park, Calif., home to the scholars in the program. “The Kings treat us like family,” Sepama says. “Having that personal connection to them—it’s very nice.”

“Marc and I share a love for music,” says Dottie King. “When he came over for Thanksgiving, I played Sinatra for him, one of my favorites.” King says she tries to be a mother to the King Scholars because they are far from home when they attend Dartmouth. Sepama and Wilson, she says, “are both wonderful. Sensitive, humble, and kind.”

They are also ambitious, says Bob King. “I’m so proud of them. The idea behind all this is to help them become future leaders—genuine leaders and innovators in their countries. They represent that promise.”

An avid traveler, Sepama participated in a summer economics program in Warwick, England, did economic research in Poland, and spent time in South Africa, living with a host family and helping to develop a curriculum for the local school, emphasizing growing and eating healthy foods. Like Wilson, he was a Great Issues scholar, exploring international issues with visiting scholars and dignitaries. Sepama was also a teaching assistant in government and engineering courses and a participant in the World Justice Project, a nonprofit organization that advances the rule of law worldwide.

“At Dartmouth, I got amazing opportunities to work with people in very different disciplines, from engineering to government,” says Sepama. “Coming here from Burkina Faso meant adapting to a new culture and a fast-paced academic environment while being away from my family, and at first that weighed on me a lot. But I got so much mentoring through the King Scholarship, and that helped me make this big leap.”

Sepama has begun a year-long internship at Helen Keller International in New York City. The organization, with programs in 20 African and Asian countries, works to combat the causes and consequences of blindness, poor health, and malnutrition. Of his long-term goals, Sepama says, “I see myself in international development or diplomacy. Eventually I want to go back home and have an impact there.”

Wilson also plans to use his economics degree to give back to his native country. “I grew up in a small town with my mother and grandmother,” he says, “and everything I feel closest to is still there.”

Wilson made close friends at Dartmouth, and says he learned to be a good listener and to respect diverse perspectives. “When I first got here, I tended to dismiss anything anybody said that was not factually accurate,” he recalls. “My first instinct was to correct people if they said something I thought was wrong.”

A turning point came on a foreign study trip to Brazil. He says his Portuguese wasn’t fluent, “so I really had to watch peoples’ eyes, their body language. I learned that you can understand people on a human level even if you don’t speak their language.” Wilson says he now tries to appreciate how people reach conclusions even if he doesn’t agree with them. “If you are too focused on facts, you can be too dismissive of what others are experiencing, what they have gone through.”

At Dartmouth, Wilson worked on research projects with Professor of Education Emeritus Andrew Garrod, studied economics in Peru, and returned home to Jamaica for an internship with Portland Private Equity, which makes investments in the Caribbean region. On campus, he worked at the Collis Center, played intramural soccer and rugby, tutored at the Academic Skills Center, and was a mentor for Dartmouth’s First Year Student Enrichment Program (FYSEP).

“With his outgoing personality and concern for others, Theo is widely known and respected on campus, and he will certainly have an impact on Jamaica and beyond,” says Jay Davis ’90, who directs both FYSEP and the King Scholar Leadership Program.

Wilson says he would like to be involved in education in his native country. Unlike Dartmouth, he says, “Jamaican schools tend to have high gates and walls. Someday it would be great to go home and create an educational environment which is closely connected to its community, not separate from it. That would make me truly happy.”

“Theo and Marc have already made such an accomplishment, graduating from Dartmouth,” says Dottie King. Bob King has high expectations for them and for all the King Scholars. “When they become leaders in their countries, we’ll know we’ve been successful,” he says.

Over the next decade, more than 50 King Scholars will be chosen for the program, the largest endowed scholarship for international students at Dartmouth. In addition to four-year scholarships, King Scholars receive pre-orientation support and mentoring from alumni. They also attend a King Leadership week in Washington, D.C., or New York City, where they meet with leaders in international development, network for internships and employment, and learn more about initiatives to improve lives in some of the poorest regions of the world.

“You are chosen as a King Scholar because you are interested in having some sort of impact on the world,” says Sepama. “I think you come away with confidence, because you were thrown into a new culture, and you met that challenge.”