“It’s such a privilege,” Marks says about leading the 2017 procession. 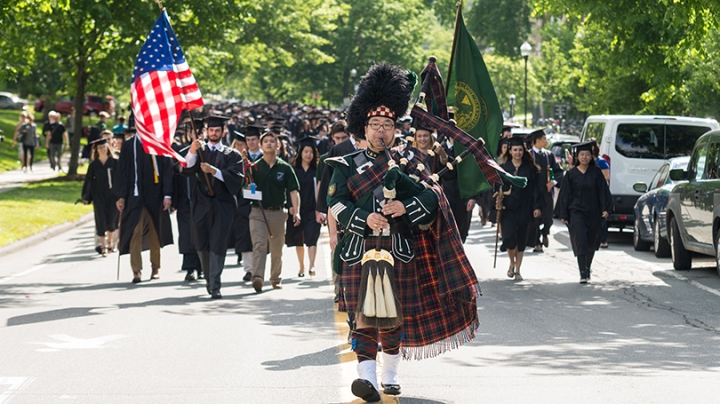 Joshua Marks ’96 has been leading the commencement day procession since his own graduation. (Photo by Eli Burakian ’00)
6/06/2017
Body

Bagpiping was first incorporated into Dartmouth’s Commencement Exercises in 1953, when President Dwight D. Eisenhower became the first sitting U.S. president to deliver the College’s commencement address. To add a ceremonial flourish, Andrew Logan, of Springfield, Mass., was hired to play the bagpipes. When Logan retired in 1996, Joshua Marks ’96 took over. He’s been leading the procession since his own graduation, and hopes to play on for many years to come. Marks, who is hoping for a sunny day on June 11, recently spoke with Dartmouth News about his life as a piper. 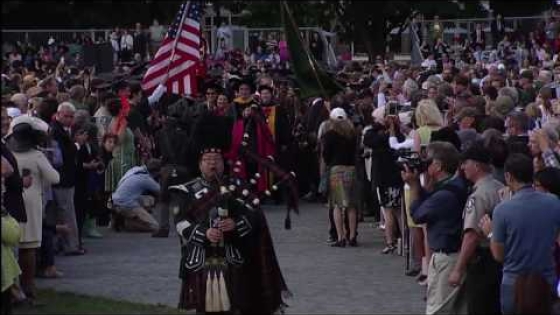 How did you get into piping?

I was a cub scout in a Bronxville Memorial Day Parade. There was a pipe band and I enjoyed the sounds, and wanted to learn to play, but being a typical kid, I didn’t practice. I went nowhere with it until freshman summer at Dartmouth. I was at home, and that’s when I had my only epiphany in life: that I would never have that much free time paid for by someone else again. I figured I had to do something productive with it, so I got a teacher and took lessons, and came back sophomore fall playing the bagpipes, probably to the dismay of everyone else living with me in River Cluster.

What attracted a 9-year-old to such a challenging instrument?

The sound is incredibly unique. It’s hard to mistake for anything else.

When you first picked it up, how easy was it for you?

You start on a practice chanter, which is kind of like a recorder. You can learn the notes and memorize the tunes on the chanter alone, but you need to actually play the full set of pipes to make sure you have the tune right and also to keep the instrument itself in shape.

How did your Dartmouth peers react to your practicing?

They were fine with it, mostly, over the years. When the weather allowed, I practiced in the Hanover Town Cemetery, or down by the boathouse, on the river, or sometimes in the BEMA. In the winter, I was allowed to use Rollins Chapel when it was available.

You work now as a CFO for the Little Red School House and Elizabeth Irwin High School in New York City. Does that leave you much time for bagpipe gigs?

A little. I play with pipe bands—a lot of firemen’s parades, and a few wedding and funerals.

Do bagpipers ever get requests at weddings?

Believe it or not, I get a lot of requests for Free Bird. There’s always someone, somewhere in a crowd, that will ask for Free Bird. I haven’t mastered it yet, though.

Do you want to?

Not sure if the pipes can pull that off. The standard fare—the Stairway to Heaven of the bagpipes—is either Scotland the Brave or Amazing Grace.

This June, for the 22nd time, you’ll lead the graduating class onto the Green. What does that feel like to you?

I’ve done it so often, it feels like home. It’s such a privilege.

Any commencements stand out?

To be honest, I remember the bad weather years more than the sunny days; 1998 was the worst rain event so far.  I play no matter what, but there was a lot of wet wool involved that year. There’s nothing quite like wet wool in June.

How long do you hope to be doing this?

Some people hold their ears when the see bagpipes coming their way. Does that hurt your feelings?

Hey, some people don’t like kittens and puppies, either.

On the other hand, some people can’t hear bagpipes without crying.

That is a common reaction.

Is it a good reaction?

It means one of two things: Either you are playing immensely expressively, or you are horribly out of tune.

Congratulations on never missing a commencement since your own.

I have been honored to play at all of them. The time has really gone fast. But Dartmouth seems to be admitting younger and younger students as I get older. With much love and respect for the Class of 2017, I’m sure I am going at look at them and think, you are all in nursery school. How is it possible that you are receiving a bachelor’s degree from the college I went to? Shouldn’t you be accompanied by an adult?