More Than Rock: College Radio Offers ‘Something for Everyone’ 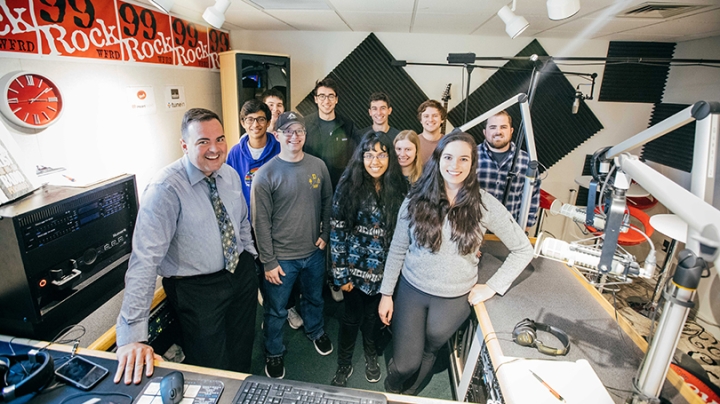 Adviser Heath Cole, at left, gathers with student leaders of Dartmouth Broadcasting in a studio at 99Rock. (Photo by Robert Gill)
6/13/2017
Body

A new team of student leaders is taking the reins at Dartmouth Broadcasting, and they are working to revive or expand programming at WFRD-FM and its internet-based station, WebDCR.

Known as 99Rock, WFRD is a commercial music station run mostly by students, with the exception of Heath Cole, an adviser who hosts an afternoon program, and professional radio announcer Chris Garrett, who has hosted the morning show for the past 11 years.

Cole says 99Rock has been a staple in the Upper Valley for over four decades. “As one of the leading local radio stations for adults based on Nielsen radio audience estimates, WFRD reaches as many as 157,000 people up and down the Connecticut River,” says Cole. “We deliver compelling content that engages audiences and drives success for our advertisers.”

But one of its popular public affairs shows, student-directed, Valley Voices, has been dormant for a few years. The station’s new student news director, Connor Turner ’20, hopes to bring it back. Turner also produces and anchors his own show on WebDCR, called “The Corner,” discussing current events from his perspective.

“I try to keep up to date on what’s going on in the world—the tensions in North Korea, for example, or Justice Neil Gorsuch’s appointment to the Supreme Court,” says Turner. “I think having my own online show is a great way to practice extemporaneous speaking about things I’m passionate about.”

Turner got involved in campus radio soon after taking a tour of the station during first-year orientation. That’s also how Program Director Leanna Arjune ’19 found her way into the station on the third floor of Robinson Hall.

“I became a much more outgoing person when I joined Dartmouth broadcasting,” says Arjune. “It’s made me more social on campus, and it’s given me the courage to accept other leadership responsibilities.”

Arjune is trying to expand and improve the line-up on WebDCR.

“It used to be a popular AM station, but after we became a web station it wasn’t easy to know which direction to take, so I’ve been trying to give it some forward momentum,” she says.

For example, she’s invited campus musicians to come into the station on Friday nights for live jams, streamed on WebDCR. And she’s trying to drum up more student interest in a wide variety of shows—not just music, but talk and information programs. Many of them are available on demand.

“People don’t generally realize this, but one course in the Latin American, Latino, and Caribbean Studies Program has broadcast its own show for over a decade. This term we are working with the Italian, German, and French departments to create international podcasts,” says Arjune.

The Latin American music show grew from a course taught by Douglas Moody, a senior lecturer in Spanish and Portuguese language and literature. “In my LATS 41 course, we talk a lot about the importance of radio as a medium for Latinos to get their music and voices heard,” says Moody. “They go into the radio station as a group, as DJ’s for a day, playing the music that reflects their culture.”

Another radio program with international flair is The Dolce Vita, which explores Italian history and culture. It was started by Gerardo Pisacane, a resident adviser for Italian language students in the Global Village. Pisacane will finish up his one-year residency this year, but Tania Convertini, a research professor and director of the language program in the Department of French and Italian, hopes the show will continue, perhaps folding in German and French topics, as well.

“I am always interested in helping students bring what they do in the classroom outside the classroom,” says Convertini. “College radio is the perfect medium for that.”

It will soon be a forum for veterans, as well. Taylor Mauney ’20, who came to Dartmouth after serving in the Marines in Afghanistan, is developing a podcast called “The Green Side.” He’ll focus on the experience of veterans attending Ivy League schools. “I will also be inviting a mix of professors and other visitors to talk about their work—anything from lost books of the Bible to Russian foreign policy,” says Mauney.

Matt Rube ’19, chairman of alumni outreach for Dartmouth broadcasting, notes that radio has a long history at the College. “I chaired the committee that ran our 75th anniversary gala last year,” he says. “I went through archives at Rauner Library and found amazing interviews of people like Louis Armstrong and Robert Frost. At one point, we were a news powerhouse.”

Rube says he learned about the stations’ origins by reading College Radio Days: 70 years of Student Broadcasting at Dartmouth College. Author Timothy Brooks ’64 writes that ham radio operators were active at Dartmouth as early as 1908. In 1958, the College flipped the switch on its first full power AM station, and, writes Brooks, “turned it over to students to run, lock, stock and barrel. They learned by doing, and everyone in the region heard them doing it.”

That’s still true today, says Rube. “Students are trying out really interesting programs,” he says. “There’s something for everybody.”