Twenty-six seniors had the chance to ask the award-winning journalist questions. 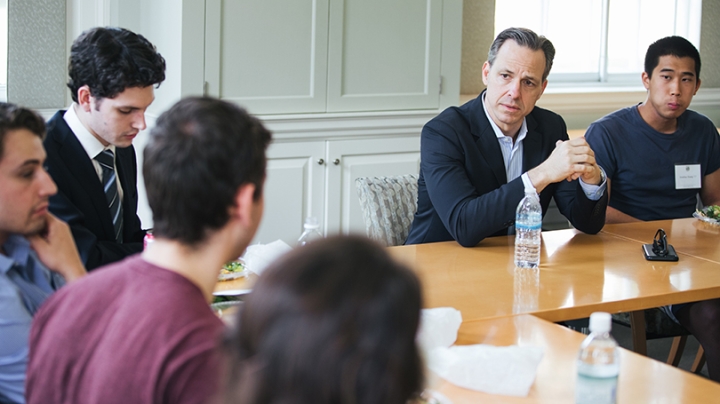 On Sunday, CNN news anchor Jake Tapper ’91, will address the graduates and families of the Class of 2017 at commencement. But on Saturday, class day, the award-winning journalist and bestselling author met 26 seniors in a more intimate setting—a luncheon sponsored by the Office of the President in the Dartmouth Center for the Advancement of Learning (DCAL) conference room.

The conversation ranged from the role of media in politics to how to find a fulfilling career to whether he was friends with his classmate Shonda Rhimes ’91 at Dartmouth (answer: “We became friends after graduation.”) to what public figures he would most like to interview (“the Pope, Vladimir Putin, or Bashar al-Assad”).

Ethan Blackwood ’17, a computer science and neuroscience major from Framingham, Mass., asked Tapper what he finds most frustrating about reporting in the current political climate.

“The whole thing of calling us ‘fake news,’ ” Tapper said, of the Trump administration’s tendency to deflect negative stories. “It’s really frustrating because almost without exception every story that the president has called fake news has been 100 percent true, 100 percent accurate. It’s not fake, he just doesn’t like it.”

Tapper sees the “fake news” accusation as an attempt “to undermine our credibility so that, with anything we report on him, there’s a segment of the population that won’t believe it. And I think he’s succeeded to that degree. And it’s just a shame, because it undermines the very important role that the press plays in providing some oversight on people in power.”

Nicole Castillo ’17, a double major in government and Asian and Middle Eastern studies, wanted to know how Tapper got his big break.

“Years and years and years of hard work,” Tapper said—a long process of working his way from his first journalism job in the 1990s “up the food chain. I left ABC news in 2012 because I wanted to be an anchor, and CNN was offering me a show,” he said. “I thought I would be decent at it, and then it’s taken me years of being an anchor and just working hard.”

Helen Nam ’17, a government major from Oakdale Gardens, N.Y., wanted to know if he had ever quit a job, or if he thought there was ever a good reason to do so.

“I didn’t have a job that I really loved until I was 29, so that’s a whole bunch of quitting and wanting to quit,” Tapper said. “But when you’re 48 and you’re sitting here talking to the Class of 3050, or whatever, you shouldn’t be in a job you want to quit. I mean, I love my job. I never want to quit, ever. I have so much fun—I talk to smart people all day. But it took me a while to figure out what I wanted to do.”

Students were selected to attend the luncheon by lottery—lucky for Priyah Ramaiah ’17, who served as managing editor of The Dartmouth and considers Tapper a role model. “When I saw the opportunity to have lunch with an incredible journalist, I was so excited,” she said. Asked before the lunch began if she had anything she wanted to ask Tapper, she pulled out a list of questions on her phone. “Yeah, I have a bunch.”

When her turn came, she chose a challenging one: She wanted to know what Tapper thought about members of the media who display explicit political biases, versus trying to maintain journalistic objectivity.

“I don’t care for it, myself,” Tapper said, though he acknowledged that partisan journalism could play an important function. “I think the problem is when people in the public don’t understand the difference. I’m not a big fan of the putting on team jerseys and watching the news kind of spectacle that’s going on,” whether on the right or the left.

“What I like is when somebody who’s partisan or ideological just labels it, owns it, acknowledges it, and then I can read it through that lens,” he said. “And I think it’s always good and healthy to understand how people who are different from you view things, whether left or right, but I don’t like when people can’t tell the difference between what I do and what Hannity does or what Maddow does, because honestly I don’t think I do anything remotely like what they do. I think that I’m an anchor and I piss off the left and I piss off the right. I’m just trying to be a journalist, and they are advocates.”

Tegwyth Alderson-Taber ’17, a theater and environmental studies double major and aspiring actor from Saint Petersburg, Fla., wanted career advice. “What decisions did you made in the first five to 10 years after graduation, looking back, that you’re really happy that you made, or informed where you were going?”

Tapper hedged slightly, acknowledging that Alderson-Taber’s question would be the topic of his commencement address the next day. “But I will say that you should not stress about if your next job is going to be the one that leads you to your Academy Award. You have your life, you have time to figure it out.”

Afterward, Alderson-Taber said Tapper’s message had hit home. “Seeing someone who was in my shoes once is really inspiring,” she said. “Hearing someone who is very successful in his field say that you don’t have to have a specific job right away is really good for me to hear. It was a really great kind of end to my senior year right before graduation.”