The Class of 2017 ROTC cadets are commissioned as second lieutenants at Dartmouth ceremony. 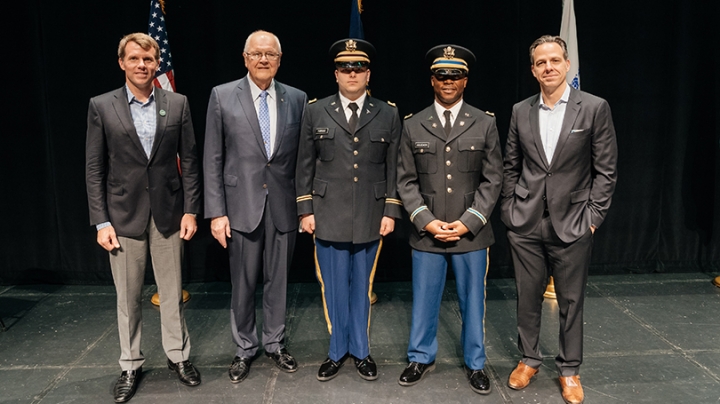 In a ceremony rich in both Dartmouth and military traditions, dozens of students, faculty, friends, and family gathered today for the commissioning of two 2017 graduates as second lieutenants in the U.S. Army.

During commencement week every year, Dartmouth hosts military commissioning ceremonies for graduating seniors who have earned the right to serve as second lieutenants in the Army and the Marines. Earlier this year, Craig Serpa, a member of the Class of 2016, became a second lieutenant in the Marine Corps on Commissioning Day at Quantico in March.

Clad in full-dress military uniforms, the two graduates marched to center stage, where they were greeted by Dartmouth Trustee Nate Fick ’99, CEO of the cyber security company Endgame, who served as a Marine Corps officer in Afghanistan and Iraq.

Fick took note of the long history of Dartmouth graduates in the military, from revolutionary times to the present. Seventy-three Dartmouth alumni served in the Civil War on both sides, and 3,407 served in World War I, Fick said. During and after World War II, the numbers grew beyond tracking.

Fick told the graduates that commissioned rank carries legal authority, but it is moral authority that makes an outstanding officer. The principle of leading by example is best represented by the phrase “officers eat last,” he said.

Fick introduced a special guest, commencement speaker Jake Tapper ’91, whom he introduced as a friend and a well-known CNN news anchor “who knows and cares a lot about the military.” In his book The Outpost: An Untold Story of American Valor, Tapper, who did not serve in the military himself, “gave a gut-wrenching account of the war in Afghanistan,” Fick said.

Tapper told the cadets that working on that book was one of the most meaningful projects of his career. As someone whose “eyes were opened late in life” about the service and sacrifice of those in the military, he said, he understands that it could seem as if friends and colleagues at the College don’t understand the significance of their service.

“All I can say is thank you for what you have done, what you will do, and if it seems like your classmates don’t get it … they will,” Tapper said.

Wright thanked the two graduates on the stage for joining the long line of Dartmouth men and women who have served, from the Continental Army to the “celebrated Shores of Tripoli” to the wars in Afghanistan and Iraq.

“You stand out among your classmates by that action and by that pledge. Yours is not a promissory note. Instead, it is a commitment publicly and personally embraced,” he said.

Wright, the Eleazar Wheelock Professor of History Emeritus, also thanked the families for their service.

He said that in researching his recent book, Enduring Vietnam: An American Generation and Its War, he interviewed over 150 men and women who served in Vietnam, asking them how and why they went into the military. One man’s story of his parents’ opposition to his enlistment and his answer still echoes with him, Wright said.

“They asked why he would ever do such a thing when there were clearly options for him to be exempted or at least deferred. He replied, ‘Is this how you raised me? To let somebody else’s kids fight America’s wars?’ ” Wright recalled.

“He told his parents that they had brought him up to always step up to his responsibilities, to never shirk duty, and to try to make a difference. At that point his parents embraced him—and his decision.”

Following Wright’s remarks, U.S. Army Maj. Steven Gagner, an ROTC officer from Norwich University, called the cadets’ “attention to orders” as he read the commissioning warrant signed by Acting Secretary of the Army Robert Speer. Gagner administered the oath of office, commissioning Farkas and Aguemon as second lieutenants in the Army.

The new officers’ families were invited onto the stage to pin the insignia of their rank to their shoulders, followed by the tradition of the first salute. Dating back to 1792, the tradition holds that new officers receive their first salute from an enlisted soldier, acknowledging the respect due their new rank. For more than 200 years, the new officers have responded by shaking the hand of that first soldier, passing them a silver dollar.

Sandor Farkas ’17, left, and Christophe Aguemon ’17 were commissioned as second lieutenants at their commissioning ceremony. (Photo by Eli Burakian ’00)

When Christophe Aguemon ’17 immigrated to the United States from Ivory Coast with his family, he was 7 years old. He spoke only French when he started second grade in Richmond, Va. By the time he graduated from both Heritage High School and the Loudoun Academy of Math and Science as a standout student and athlete, he had a full four-year ROTC scholarship to attend the University of Virginia, but he was determined to pursue admission to Dartmouth.

His interest in the College started the summer after his junior year of high school when Aguemon attended Dartmouth Bound, an admissions program that recruits students from historically underrepresented backgrounds for an extended visit to campus.

“That program got the ball rolling for me to come here. I fell in love with Dartmouth,” he says.

Aguemon was accepted through early admission, and he committed to the College before applying to the U.S. Army to transfer his ROTC scholarship from UVA.

“It was a bit of a gamble, but the Army has a positive view of the leadership qualities an Ivy League education can develop,” he says.

At Dartmouth, Aguemon majored in government, taking a number of classes on military affairs and national security with Associate Professor of Government Daryl Press and a counter-terrorism class from Daniel Benjamin, the Norman E. McCulloch Jr. Director of the John Sloan Dickey Center for International Understanding. These studies provided an ideal background for his goal of serving as an Army intelligence officer, he says.

Aguemon also has a strong interest in politics and elections.

“I’d like to get into politics. I eventually see myself in political office,” he says. “It is something I’ve been interested in since middle school. My dad and I would talk about it all the time.”

Throughout his Dartmouth career, he played defensive back on the football team, played wing on the rugby team, and was a member of the Beta Alpha Omega fraternity. All these experiences have provided a solid foundation for his life and career, he says.

“I think one of the big things that Dartmouth has shown me is open-mindedness—being open to diverse backgrounds, different cultures, different people—this has been instrumental in developing my leadership abilities. I think Dartmouth really shined that light,” he says.

Upon graduation, Aguemon will serve as second lieutenant in the U.S. Army Reserves as a military intelligence officer with the 333rd Military Police Brigade, Farmingdale, N.Y. At the same time, he will be joining Morgan Stanley’s Investment Banking Division in New York City as an analyst.

Major: History with a minor in Jewish studies

It was a passion for history and scholarship that led Sandor Farkas ’17 to military service and to Dartmouth. After graduating as valedictorian from Valley Forge Military Academy, Farkas was accepted to both West Point and Dartmouth. Entering Dartmouth as an ROTC cadet was the perfect balance, he said.

Since high school, Farkas has been involved in military reenactments. He joined the Rhode Island United Train of Artillery, a unit of the Continental Army that traces its charter to 1775, where got to know a number of veterans and participated in archival research.

At Dartmouth, Farkas majored in history with a minor in Jewish studies. He was part of the Dartmouth Vietnam Project, an oral history archive of College life during that era. He says he studied with many of outstanding professors, making special note of David Lagomarsino, Charles Hansen Professor of History, Susannah Heschel, Eli Black Professor of Jewish Studies, Sergei Kan, professor of anthropology and Native American studies, and Russel Muirhead, Robert Clements Professor of Democracy and Politics.

“One of my favorite things about Dartmouth is the ability to get to know these world renowned scholars on a personal level,” he says.

Throughout his time at the College, Farkas has participated in a number of fellowships and conferences with the Tikvah Fund, the Hertog Foundation, and the United States Military Academy. He is also involved in Jewish life at Dartmouth and served as editor-in-chief of The Dartmouth Review.

Farkas will serve as a second lieutenant in the Medical Service Corps with the 1st Battalion, 116th Infantry of the Virginia National Guard. He will command a medical service platoon of personnel, including ambulance drivers, medics, and a field aid station. Again, history played a part in his decision.

Dartmouth his a long history of service in the medical services dating back to the Civil War and World War I, he says, citing the Baker Library memorial to Richard Neville Hall, Class of 1915, a volunteer ambulance driver and Dartmouth’s first fatality in World War I.

“It is a very Dartmouth thing to do,” he says.

In addition to his National Guard duties, Farkas has accepted a fellowship to work as a journalist in Washington, D.C., writing on Jewish and conservative thought.