“Whatever you do, surprise us,” said guest of honor Niegel Smith ’02. 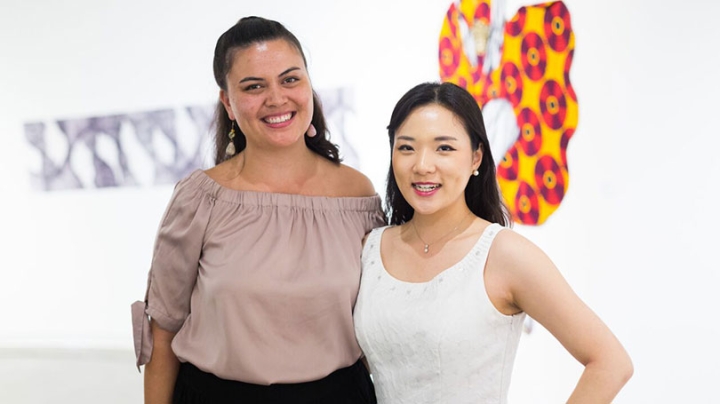 This year’s Arts at Dartmouth award ceremony, which honored 80 student artists, got off to a rousing start with Cop Song, a song-and-dance number reprised from the Winter 2017 Department of Theater MainStage production of Urinetown.

The annual event is a celebration of creativity, when students who make compelling film, music, theater, and studio art are recognized and rewarded.

In her opening remarks May 30 in Moore Auditorium at the Hopkins Center for the Arts, the recently appointed Howard L. Gilman ’44 Director of the Hopkins Center, Mary Lou Aleskie, said Urinetown was “one of the first things I saw here, and I just fell in love with Dartmouth students immediately.”

Aleskie thanked all the student artists for creating the “constant buzz” that surrounds the College arts district.

“Much of this work takes place, as you know, behind the scenes, during late nights in the studio and in hours of practice in rehearsal spaces,” Aleskie said. “In those moments, you have grappled with uncertainty, tested your patience, and taken risks. You learned how to evaluate art in all periods and media. You developed the ability to use art to tell powerful stories.

“Keep it up, because if we’ve ever needed energetic, talented young people who can call us out and call us together and challenge us to come together across our differences, that day is today,” she said.

Eighty students received awards, many with cash prizes. Soprano Min Jee Kim ’17 took the stage twice, first to receive one of two Eugene Roitman 1943 Memorial Awards for music (the other went to singer-songwriter Tyné Freeman ’17), and later to close the ceremony with her solo rendition of Handel’s Oh Sleep, Why Dost Thou Leave Me?, accompanied on piano by her voice teacher, Louis Burkot.

Kim came to Dartmouth to study math, but after a music foreign study program took her to Vienna, and opportunities to perform at Dartmouth multiplied, she decided to pursue a vocal career, and will attend the Royal College of Music in London next year.

“This award really encourages me to further my studies,” Kim said at the reception following the ceremony. “It means a lot to me.”

One prize was kept secret until Provost Carolyn Dever announced it on stage. “The Sudler Prize is endowed by the late Louis Sudler and is awarded to a student in recognition of outstanding excellence in the creative or performing arts. With the agreement of Samuel Rosenthal, the Sudler Prize is awarded to a Marcus Heiman-Martin R. Rosenthal ’56 Achievement Award winner,” Dever said before naming the recipient—Emily Neely ’17.

Loud cheers erupted as Neely, who has worked with the Hop administration since her sophomore year, and plans on a career in arts management, accepted her certificate.

In his remarks, guest of honor Niegel Smith ’02 commended Dartmouth for recognizing behind-the-scenes arts achievement as well as performances. “That is so wonderful, so important,” Smith said.

Smith spoke about his childhood in rural North Carolina, where going to church was “catching the spirit, speaking in tongues, dancing, singing, call and response, impromptu storytelling—we call that testifying. It was a theatrical invitation to celebrate, to reflect, to meditate on how we might better live,” Smith said.

Smith said even though he now questions some of the teachings of the church he attended as a child, he has “never questioned what was going on aesthetically there, and the driving impulse behind it.”

He implored the student artists to harness “disruptive” creative energy.

“Whatever you do,” he said, “surprise us. Dare to create original artworks that demand our attention, artworks that seem familiar and yet distance us, and make us aware of something that we may have forgotten, dismissed or buried. We need you. We deserve you.”

Smith ended by asking all his listeners to take the musical advice of funk and soul icon James Brown. “Get on up,” he called to the audience. “Get into It. Get involved. Now repeat that after me.”

“Get on up. Get into it. Get involved,” the audience chanted, as Smith nodded and smiled from the podium.