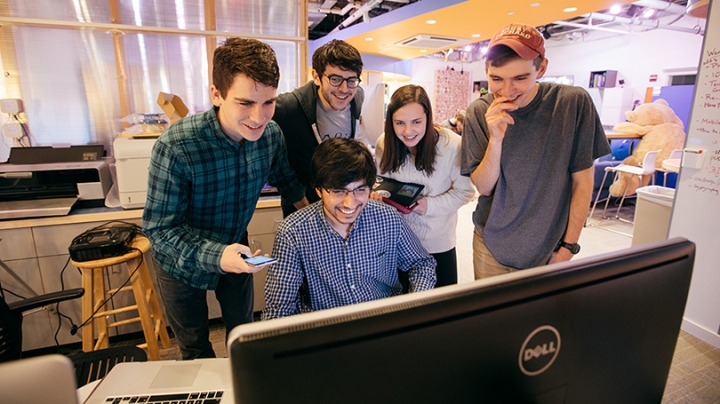 Just in time for graduation, Terren Klein ’17 has attracted major support from an investment fund that helps startup entrepreneurs like him develop their products. Klein and Robin Jayaswal ’18 are the co-founders of Pulsesurvey.com, an online survey platform that polls college students on a wide range of topics, from campus life to politics.

Millworks Fund Series II, a New Hampshire-based venture capital group, says it intends to invest $100,000 in Pulse (not to be confused with a College wellness site by the same name), following a “due diligence” review of the company’s financial and legal profile. In a private-public partnership, Millworks’ investments are matched by the New Hampshire Business Finance Authority.

“We’re excited about investing and we want to shout from the rooftops that Pulse is a fantastic opportunity,” says Millworks II general partner Graham “Gray” Chynoweth. “What we see is a group of smart people solving a problem about how to get the next generation of consumers to engage with people that need to learn things about their interests and tastes and perspectives. A great place to start that is on a college campus, and Terren’s vision for engaging campus communities, and then broader, additional communities, is pretty compelling when you see how successful he’s been at getting engagement with students.”

Unlike many other surveys, Pulse uses an online platform to solicit opinions and present findings, which are sorted on the site into categories, including race, gender, and demographics. Klein made his pitch to Millworks at an event sponsored by Alpha Loft, a business incubator based in Manchester, N.H.

“I have been a part of that program for a few months, and this was the culminating demo day,” says Klein. “Given the caliber of the competitors, I had fairly low expectations. But when Millworks announced in front of 300 people that they wanted to invest in Pulse, that was pretty mind-blowing—and it still feels surreal to think that we are getting the resources to scale up nationally.”

The capital influx, says Klein, would be “a complete game changer, seeing as we’ve spent a total of only $6,000 since Pulse’s inception. While we are still in the process of fundraising, we are hiring full-time developers and paying our student developers so they can commit more time.

“It’s really a testament to the caliber of talent at Dartmouth that we’ve been able to build what we have so far with no outside help and with each member of the team taking classes. However, with the new funding and my pending graduation, we are in a perfect position to take Pulse to the next level,” he says.

Klein’s design and development team is gearing up. “By the start of the 2017-18 school year, we expect to be on the campus of every member of the Ivy League, which would allow universities to benchmark student opinions against peer institutions,” he says.

In the long run, Klein says, the business plan is “to help any type of organization that struggles to understand the opinions of their constituents, including large corporations, and even local and national governments.” Now that Millworks has shown confidence in his product, he hopes others will invest in Pulse, and help him identify future clients. A Stamps scholar, Klein says he feels indebted to Dartmouth, especially the DALI Lab and the Dartmouth Entrepreneurial Network (DEN) and also to the New Hampshire funders and mentors supporting his startup.

After graduation, Klein and Jayaswal plan to live and work in the Hanover area as they get their fledgling company off the ground.