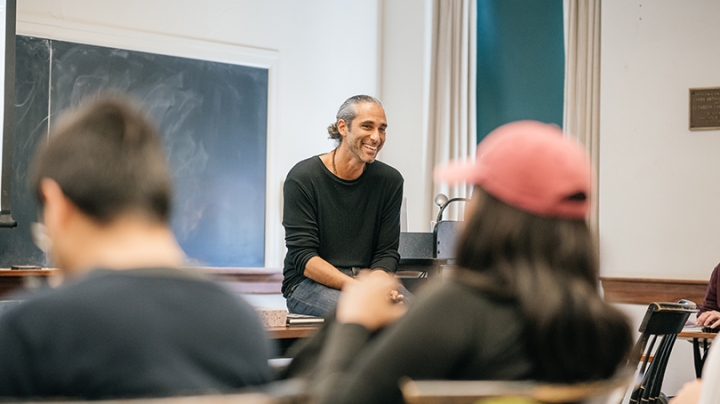 Fazal Sheikh, a photographer and a 2017 Montgomery Fellow, speaks to the “Migration Stories” class in Dartmouth Hall. (Photo by Eli Burakian ’00)
6/15/2017
Body

The United Nations estimates that there are about 232 million international migrants worldwide. Many have been forced to leave their homes because of poverty, global conflicts, and natural disasters. To help students understand the causes and effects of migration, Silvia Spitta, the Robert E. Maxwell Professor of Arts and Sciences has teamed up with Gerd Gemunden, the Sherman Fairchild Professor of the Humanities, to offer an interdisciplinary comparative literature course called “Migration Stories.” The focus is on how film and literature represent migrants, borders, and border crossing experiences throughout history.

“In America,” says Spitta, “we tend to think of people traversing only one border, and when students think of migration they think mostly of undocumented people leaving Mexico. We teach them that in Europe’s history there have been patterns of migrations. Migrants have always been ‘othered.’ They have always been seen as strangers, regardless of how similar they may be to the local population. Simply because they are moving, they are made strange.”

Josefina Ruiz ’17, who took the course this spring, knows firsthand what it feels like to be “othered.”

“I grew up in a very poor neighborhood outside Dallas, Texas,” she says. “My parents are immigrants. When I went to pre-school, my father had to work three jobs. I remember kids picking on me because I went to school carrying just my little doll in a grocery bag, and they all had nice backpacks. Kids can be mean.”

Her mother decided she would be better off in a primarily Hispanic magnet school, which Ruiz says was a better learning environment. “I got to do theater and orchestra, and from that point on, I decided, I am going to do something, and be someone.”

At Dartmouth, Ruiz majored in government, and says she loved “Migration Stories” because of its multi-disciplinary approach. “We saw a lot of films and read ethnography in a book called Crossing Over: A Mexican Family on the Migrant Trail, by Rubén Martínez. It’s very personal, because it’s about people, and the author has been a migrant.”

Spitta says Martínez is coming to Dartmouth this summer at the invitation of Virginia Beahan, a senior lecturer in studio art, and will visit Spitta’s class, “Crossing the US-Mexican Border: Myths and Icons of Hybridity.” She invites many guests to talk to her students about migration— in their own, or lives they have documented.  During spring term, she and Gemunden asked Fazal Sheikh, a 2017 Montgomery Fellow, to show the “Migration Stories” students personal narratives he has created, using photography, archival material, audio recordings, and his own written texts.

Sheikh, who was born in New York and now lives in Zurich, spends weeks, months, even years getting to know his subjects, most of whom are migrants. As he told the students, his interest in displaced communities around the globe grew from his own multi-cultural heritage. “My father’s side of the family was from Kenya, but his parents had emigrated from India through Pakistan,” Sheikh said.

An early project took him to Kenya to photograph Sudanese and Somalian refugees in camps. He said he wanted to take an approach that was different from photojournalism he had seen from those regions.

“I was unhappy with images I had seen in the media, which tended to portray them as victims in a cruel world, with little understanding that these people had endured horrific event, and they were there to give one another strength. My first body of work was about deferring to people in the refugee camps and asking them to participate in the process of telling their stories,” Sheikh explained.

Students asked how he gains the trust of the people he photographs, often at times of struggle and duress.

“I don’t go anywhere with a preconceived idea of what I want to do,” he told them. “I go with a lot of openness, and I do a lot of listening, and I meet with each person directly and discuss with them whether or not they are willing to have their story recorded.”

“When I look at your images, I think I see people who are consenting to be photographed, who are comfortable in front of your camera,” Spitta said.

She says she wants her students to understand that “migration is something that is produced by countries, and we need to think about the conditions that make people leave. Because most people don’t want to leave their homes, and when they are forced to leave, they always want to go back.”