Through Silo(e)scapes, Zenovia Toloudi Highlights Need for Protecting Native Seeds of the Mediterranean

Where A Seed Bank, Sharing Economy and Museum Become One

June 5, 2017 – As agriculture, climate change, pollution and other factors continue to impact our planet, native plant species, including those in the Mediterranean, are threatened. Through the project—  Silo(e)scapes; architect, artist and Dartmouth Assistant Professor of Studio Art Zenovia Toloudi, provides a social commentary on these issues by envisioning a future architecture, which is a hybrid of a seed bank, a sharing economy and a museum for Mediterranean plant species that may disappear.

Silo(e)scapes is one of 33 projects in the exhibition, Tomorrows: Urban fictions for possible futures, which is on display through July 16 at Diplareios School in Athens, Greece. Tomorrows was curated by Panos Dragonas and Daphne Dragona, and was organized by Onassis Cultural Center. The exhibition explores the environmental, technological and social changes impacting our planet today, and considers tomorrow’s possible worlds.

As a concept, Silo(e)scapes would store and display threatened native seeds from the Mediterranean in transparent silos that double as columns for the museum’s space. The native seeds would be shared communally among Silo(e)scapes’ members, rather than belonging to private corporations. Silo(e)scapes strives to preserve the biodiversity of local seeds and protect Mediterranean tastes, flavors, nutrients and medicinal capacities, which could be “threatened by environmental catastrophes, as well as by the increasing demand for control and standardization” by agricultural companies. 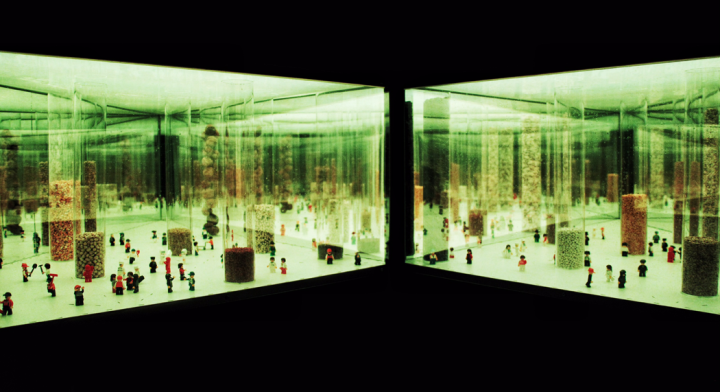 “Silo(e)scapes transforms the anxiety of such dystopia into the experience of a futuristic, optimistic, architecture. The multiplicity of columns presents a building (and a depository) that neither belongs to global companies, nor to the economic elite but to the community and ordinary people, who share the valuable goods on equal terms.” says Zenovia Toloudi.

Through the art installation, Silo(e)scapes, which is part of Tomorrows, visitors experience a doll-house like panopticon structure that expands in infinity through a kaleidoscope of mirrors. Silo(e)scapes functions like a wearable room, where visitors insert their head into the hole of the installation “to observe the threatened seeds, the seed bank museum and the sharing economy of lilliputian citizens. The seed-columns of the infinite space, the kaleidoscope of mirrors and agrarian sounds, construct a perceptible space that serves as a portal between reality and fantasy.”

Toloudi’s “research builds on a cultural approach of technology, craftsmanship and activism in architecture with installations that interplay with the physical qualities of space and one’s sensual perception to enhance awareness and participation.” She has exhibited her work internationally at venues, including at the 2006 Venice Biennale of Architecture in the Pavilion of Greece, The Lab at Harvard, Athens Byzantine Museum, American Institute of Architects New York Chapter, and Illuminus Boston. Toloudi has a Doctor of Design degree from the Harvard Graduate School of Design, a master of architecture from Illinois Institute of Technology and an architecture engineering diploma from Aristotle University of Thessaloniki.