The sociology professor and expert on friendship wants to bring people together. 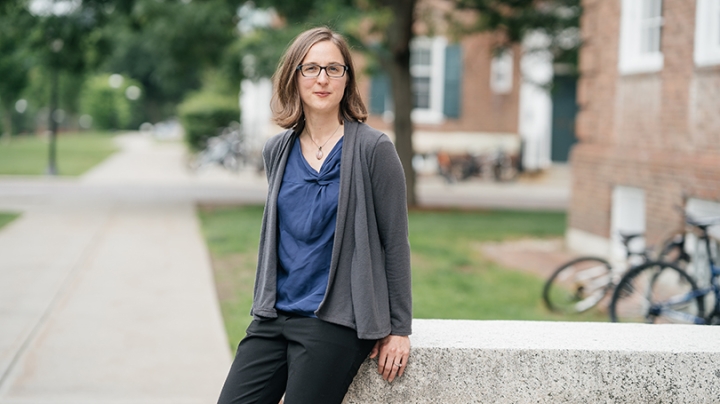 Associate Professor of Sociology Janice McCabe says the impact of friendship in her own life inspired her to study how friendship networks work. (Photo by Eli Burakian ’00)
7/05/2017
Body

Associate Professor of Sociology Janice McCabe studies friendship—specifically, how the friendship networks formed during college affect students’ happiness and academic success. So it’s likely she’ll have some good advice for the students in Allen House, where she is taking on the role of house professor.

McCabe, who grew up on a farm in rural Ohio, says the close relationships she formed as an undergraduate at Tulane University, and later as a graduate student at Indiana University, inspired her scholarly interest in friendship.

“I often wonder if I would have gotten through without my friends—helping me with the intellectual work but also just sometimes being a break from that kind of pressure and stress,” she says. “There is little scholarly literature on college students’ friendships, and I don’t think enough on friendships in general. And so I wanted to better understand how friendships could support students and also hinder their success—and they can do both, I’ve found in my research.”

Dartmouth’s house communities were launched last year to increase students’ sense of continuity in their residential experience, provide more opportunities for them to interact with faculty and staff beyond the classroom, and build community. First-year students are assigned to one of six communities when they matriculate, and remain affiliated with that community throughout their undergraduate careers. Six professors, plus a seventh for the Living Learning communities, live in single-family homes near the student residences. Allen House includes Gile, Streeter, and Lord residence halls. McCabe replaces Associate Professor of Engineering Jane Hill, who served as Allen House professor during the community’s first year.

Already this summer, McCabe has been meeting Allen House residents, planning house events—from an ice cream social to community dinners to informal gatherings with guest scholars and artists—and helping sophomores organize a summer working group to continue the efforts of the executive board that formed last year. “I look forward to welcoming students at my house for events—and staff and faculty, as well—to keep building on the community that already happened last year.”

McCabe says she and her family—husband Jeremy Vida and sons Kallen, 6, and Cole, 2—are excited about moving into the official house professor residence on Allen Street with their cats, Linus and Zadie. “We’re probably going to get the boys bunk beds, and they’re excited to share a room and have that adventure,” she says.

An avid baker who loves chocolate chip cookies (“sometimes I do double chocolate, and put some cocoa in the batter”), McCabe says she looks forward to opening the house’s kitchen to students.

“Food is something that brings people together,” she says. “It doesn’t necessarily have to be food, but sometimes cooking together can be the foundation where you can talk about more difficult issues and create a space where we can acknowledge and talk through differences and validate the experiences that people are having, and learn from each other.”

As house professor, McCabe’s role is to facilitate relationships, not study them, but as a scholar, she’s also curious about the house system. She had already begun studying friendships among students at three New England colleges and universities, including Dartmouth—a follow-up to her recent book, Connecting in College: How Friendship Networks Matter for Academic and Social Success, which focuses on students at a public university in the Midwest. She plans to add a Dartmouth cohort of students who have experienced the house community system since matriculation.

The challenge for growing a vibrant house community? Time, she says. “There are always so many competing demands on my time and on students’ time, but it’s important for everyone to make time to participate and to get to know each other. Often people don’t know about the interesting work that other students or faculty are doing—not just work in the academic sense but extracurricular activities, volunteering, all of that. Figuring out what people have in common that they may not necessarily know right away gives people a way to get to know each other on a deeper level.”

Things students may discover about McCabe: She loves hiking with her family (“Cardigan Mountain is such a nice hike for the amount of time it takes, and the views are amazing”) and practicing yoga (“I do my adult yoga, but I do dinosaur yoga with my kids—we roar like T-Rexes, and make our bodies like pterodactyls that fly through the air. That’s actually a good one for adults—it stretches your body and your mind.”)

She thinks Allen House is off to a good start, thanks to its staff, which she calls “amazing—especially Assistant Director Lauren Oliver and Administrative Assistant Erin McMahon,” and student leadership. “The executive board that formed last year was a really tight-knit group,” she says. “I can see in the interactions I’ve had with them they’ve had a lot of fun together, they work together well, they like each other. It’s really great to see. I think they were a lot of the driving force behind the great energy and enthusiasm in Allen House.”

And she sees her role as helping students make the most of that energy. “That’s a really fun part about this job—students have great ideas, and we have great resources, so how can we make it happen?”