Dartmouth Is on the NAI’s Top 100 List for U.S. Patents

Report ranks universities worldwide by the number of utility patents granted in 2016. 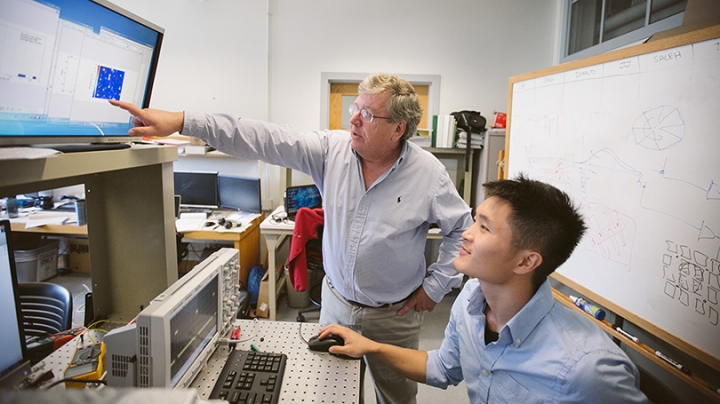 Dartmouth is on the National Academy of Inventors’ top 100 list of universities worldwide granted U.S. patents in 2016, marking the fifth consecutive time the College has made the top 100 since the list was launched in 2012.

The report, which is published by the National Academy of Inventors (NAI) and Intellectual Property Owners Association (IPO), uses data on utility patents issued by the U.S. Patent and Trademark Office to highlight the important role patents play in university research and innovation. Dartmouth is one of six Ivy League schools on the list.

“For such a small school to have a place on this list shows that our faculty engage with pressing problems, they are coming up with attractive solutions, and they are committed to moving those solutions into the real world,” says Dean Madden, Dartmouth’s vice provost for research.

Madden, a professor of biochemistry and cell biology, leads a Dartmouth biomedical laboratory that conducts research on molecular recognition and cystic fibrosis and directs the campus-wide Institute for Biomolecular Targeting. In these roles he has seen firsthand the vital link between academic research, patent development, and bringing innovations to the marketplace.

“Let’s say you found a wonderful drug and you just published it without getting any intellectual property protections. Very few companies would be willing to develop that drug because it’s in the public domain,” Madden says. “So you may have found a solution in theory, but you’re not going to get traction on the partnerships that are ultimately necessary in order for anyone to benefit from it.”

In 2013, under the leadership of Tillman Gerngross, a professor of bioengineering at Thayer School of Engineering, the College established the Office of Entrepreneurship & Technology Transfer. The mission of this office, now under the direction of Associate Provost Eric Fossum, is to promote entrepreneurship and support technology transfer from academic research to the private sector.

Fossum, who holds 161 patents, many of which are related to his work on advanced CMOS image sensors, knows well how important patents are to the technology transfer and commercialization of inventions.

“An issued patent is one of the ways Dartmouth technology is transferred to the world,” he says.

Nila Bhakuni, director of technology transfer, says that Dartmouth’s place on the National Academy of Inventors’ list for 2016 might not yet fully reflect the total number of patent filings the technology transfer office has facilitated, since the list only covers issued patents. Typically, it takes four years from the filing of an application to the granting of a U.S. patent, she says.

Looking forward, Dartmouth is well positioned to continue as a leader in intellectual property development, Bhakuni says, because of the rich research environment at the College. Research in the arts and sciences, at Geisel School of Medicine, at Thayer, and through interdisciplinary collaborations is producing important work in drug development, therapeutics, devices, technology, engineering, and much more, she says

“It’s a really interesting mix of technology, and it has to do with the quality of the research portfolio,” Bhakuni says. “That’s the thing that I found the most intriguing in coming to Dartmouth after being at three other schools.”

The NAI and IPO rankings are compiled by calculating the number of utility patents granted by the U.S. Patent and Trademark Office to a university as the first assignee on the issued patent.